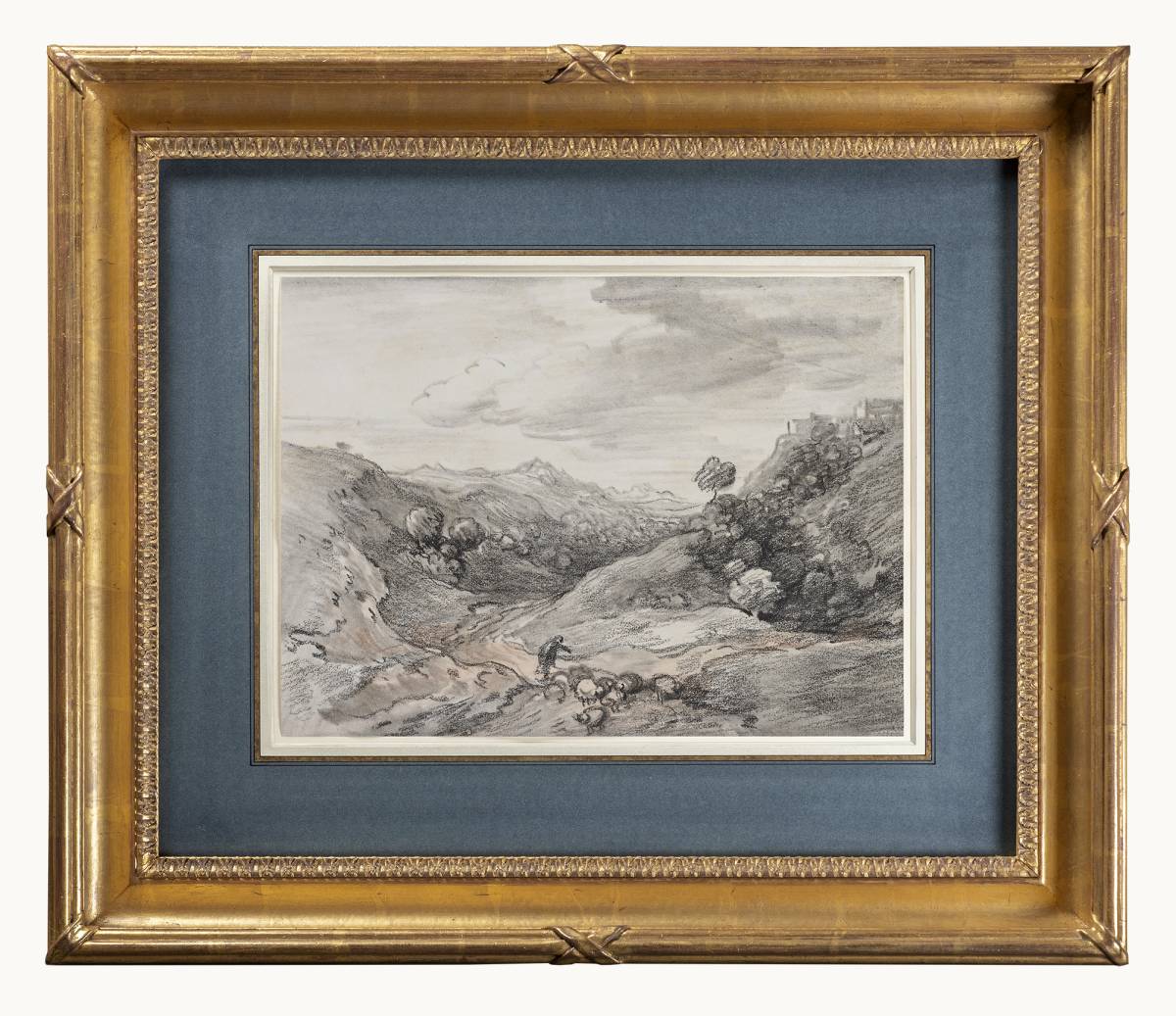 This remarkably free late drawing by Gainsborough is a rare instance of his more or less direct engagement with French Classicist landscape of the seventeenth century. Worked rapidly in black chalk, stump and pink wash, the highly structured landscape shows a shepherd with his flock of sheep in the foreground of the landscape, with a townscape on the hill to the right. This form of landscape recalls the work of the French painter Gaspard Dughet, whose highly structured, lyrical Arcadian landscapes had a profound impact on Gainsborough’s work. Gainsborough’s drawings rarely relate directly to his practice as a landscape painter, rather they should be considered as an autonomous artistic exercise; rarely left unfinished, the late landscape drawings point to Gainsborough’s profound interest in composition and technique and the potential for these formal qualities to evoke an emotional response in the viewer. This sheet is unusual for its direct engagement with the landscape of the Roman Campagna, the landscape most associated with Dughet. It is also unusual for its extensive provenance, we know little of the status of Gainsborough’s landscape drawings during his own lifetime, but that they were highly prized by his contemporaries is attested by the distinguished collections they are recorded in by the early  nineteenth century. This unusually loose drawing belonged in the early nineteenth century to George Rushout, 3rd Lord Northwick, but seems almost certainly to have been purchased by his father who was a distinguished and voracious collector. It remained at Northwick Park until sold in 1921.

The appeal of Gainsborough’s late landscapes lies, in part, in their technical virtuosity. In the present sheet Gainsborough limits himself to black chalk and a small amount of wash on wove paper, but with this exiguous range of materials he creates a complex and boldly worked landscape. The idealised composition is clearly inspired by the work of Gaspard Dughet, whose landscapes were familiar to Gainsborough and his contemporaries both in the original and through the medium of engraving.[1] Dughet, known throughout the eighteenth century as Gaspard Poussin, offered Gainsborough a vocabulary of forms and most importantly compositional devices for his own works. Dughet’s pictures frequently contained serpentine tracks, often with a flock of sheep or herd of cows with a solitary herdsman or shepherd, framed by trees, with groups of rustic buildings in the middle-distance and hills on the horizon. The present drawing is a precise distillation of these Gaspardesque features. It is not a direct copy, nor does it directly quote from Dughet’s works, but it approximates the ‘machinery’ of his work. The stepped buildings on the right of the composition evoke the hill town of Tivoli in the Roman Campagna, a town that is particularly associated with Dughet and his work.

Our drawing demonstrates Gainsborough’s sophisticated refining of features learnt from Dughet. Gainsborough is consciously engaged in the action of imitation. To an eighteenth-century audience, this was not a negative process, but an intellectual and creative activity that placed the artist on a level with the model he was imitating. In Johnson’s words, imitation was: ‘a method of translating looser than paraphrase, in which modern examples and illustrations are used for ancient, or domestick for foreign.’ A sheet Gainsborough gave to Richard French and now in Melbourne is tellingly inscribed: ‘original chalk drawing by Gainsboro…after the style of Gaspar Poussin.’[2] In the present sheet Dughet’s influence is particularly legible.