This sheet is an exceptionally rare full-figure study by Peter Lely, executed in black and white chalks on buff-coloured paper, it is unusually complete and ambitious. The drawing shows Lely exploring a pose that he deployed successfully in a number of ambitious portraits made shortly after the Restoration including of Anne Digby, Countess of Sunderland one of the ‘Windsor Beauties’, the series of eleven portraits commissioned or at least assembled by Anne Hyde, Duchess of York from around 1662. This incisive drawing offers important evidence for the way Lely worked, particularly his use of preliminary studies in his portrait practice. As with many of Lely’s working drawings the sheet was evidently in his studio when he died, when Lely’s collection stamp was applied to it by his executor Roger North.

Lely was born in Soest, Westphalia, he was trained in Haarlem and came to Britain in about 1643. As a talented and ambitious young artist it is possible that he arrived in England with the specific intention of succeeding Van Dyck, who had died two years previously, as the King's Painter. According to the engraver and antiquarian George Vertue, Lely spent his first few years in England working for the successful portrait painter and picture dealer George Geldorp, pursuing what an early commentator, Bainbrigg Buckeridge, called: ‘the Natural Bent of his Genius, in Landskips and Painted with small Figures, as likewise Historical Compositions.’[1] Buckeridge continues, stating that Lely soon found: ‘the practice of Face-Painting more encourag'd here’ and therefore ‘turn'd his study that way, wherein, in a short time, he succeeded so well that he surpass'd all his Contemporaries in Europe.’[2] By the Restoration Lely had achieved a maturity and distinction that marked him out from his contemporaries, combining something of Van Dyck’s grace with his own more robust manner. His appointment in 1661 as Principal Painter, and his naturalisation in the following year, Lely was recognised as the chief artist in England.

We know quite a lot about Lely’s studio practice, thanks to a number of contemporary accounts and it is clear that drawing was central to his production of painted portraits. Lely seems to have made quick chalk sketches to catch a sitter’s likeness at a first sitting. In 1673 the painter William Gandy made observations about Lely’s methods, noting that he first: ‘slightly chalks out the body’, then laid in the face, and, ‘the person sitting in his intended posture’, he next sketched in the hands and clothes adding: ‘He does all this by the life presently whilst the person stays so you have a picture in an instant.’[3] This process is confirmed by another account from a contemporary. In the 1670s Lely’s friends the painter Mary Beale and her husband Charles, a patent clerk, art dealer and colourman, commissioned a number of portraits from him, including one of the future Archbishop of Canterbury, John Tillotson. During the initial sitting with Tillotson, Beale observed Lely make a drawing: ‘first in chalk rudely & afterwards in colours and rubbed upon that a little colour very thin in places for the shadows, and laid a touch of light upon the heightening of the forehead.’[4] This ‘rude’ study was evidently designed to serve as a guide to Lely himself, at the same time acting as important material for use in his busy and productive studio.

These rapid, full-figure studies are rare. The present sheet shows Lely working out the pose of a seated woman precisely in the manner described by Gandy and Beale. Lely appears to have captured in black chalk the disposition of the figure, the fall of the dress and drapery before working on the delicately arranged arms and hands with touches of white chalk, finally adding touches of sanguine to articulate the shadows and animate the features and hair. Lely evidently worked out the figure on the page in the first instance, perhaps adding the head as an after-thought, resulting in the curiously truncated format of the portrait. This is perhaps explained by Lely’s desire to capture the sitter’s hands and the arrangement of the costume, rather than the sitter’s features which he could better record during a sitting for the portrait itself. Lely seems to have used complex life studies such as this as the basis for several portraits. Oliver Millar identified this sheet as forming the basis for Lely’s portraits of the courtier Anne Digby, Countess of Sunderland versions of which are at Hampton Court and Althorp and Lady Elizabeth Carey in the collection of the Earl of Roden.[5] In each of these portraits Lely follows the pose worked out in the present drawing, merely altering elaborations of costume and jewellery.

The evidence suggests that Lely used drawings at every stage of the portraiture process. He probably showed prospective sitters drawings with various poses worked out to help them choose how they wished to be depicted; he made compositional sketches, such as that of Tillotson described by Beale, and then made studies as the painting progressed to work out costumes, poses and gestures. It is the latter group of studies which survive in greater numbers, suggesting that they were far more central to Lely’s practice. Beale describes Lely making a drawing whilst he was painting a portrait Beale had commissioned of his son, also called Charles, in 1672. Beale noted that after: ‘Mr Lely dead coloured my son Charles picture… he took a drawing upon paper after an Indian gown which he had put on his back, in order to the finishing of the Drapery of it.’[6] We can therefore infer that sheets such as ours had a practical purpose. Draperies constituted areas of secondary importance in the finished portrait, Lely would have reserved the valuable time he had with the sitter to concentrate on the face and expression. The drawings he therefore made during a sitting could be worked up on the canvas by assistants, or at the very least in the absence of the sitter.

Scholars have been slow to appreciate these process drawings, made during the execution of a portrait. Lely was famed for having stock poses, in his accounts, Lely’s executor, Roger North, added a number to Lely’s unfinished portraits, suggesting that each number corresponded to an established pose: ‘Whole length postures No. 8 & 1’, and ‘Sr. Ralph Verney ½ 49’, for example.[7] Lely’s reliance on formulaic poses, on studio assistance and on replicating his own compositions has resulted in a degree of critical neglect. As Oliver Miller observed: ‘Lely’s reputation has suffered because it has made to rest so often on portraits in which he himself had no part and because among the portraits he did paint there is not sufficient variety in scale, in layout or in the relationship between the sitter and the spectator.’[8] But the versatility and subtlety of Lely’s portraiture is instantly visible in a life study such as this. This intimate drawing communicates Lely’s virtuosity and creativity, injecting life into a conventionally arranged subject. 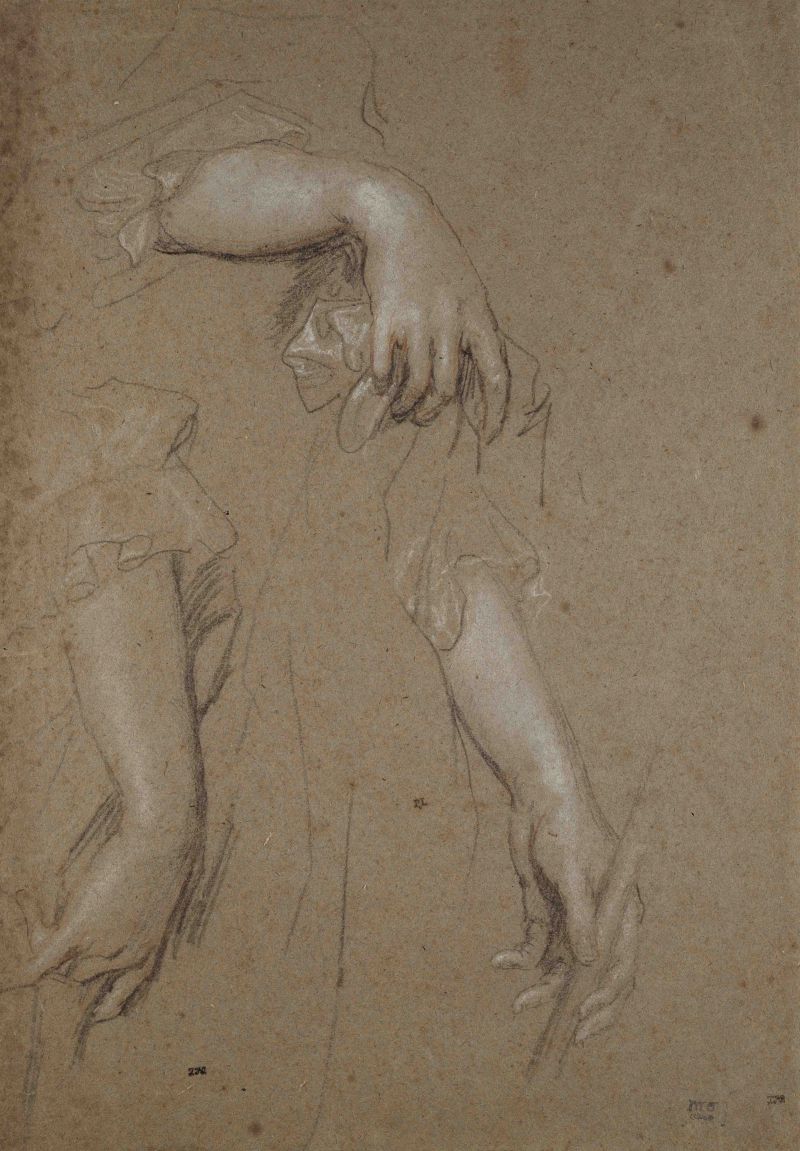