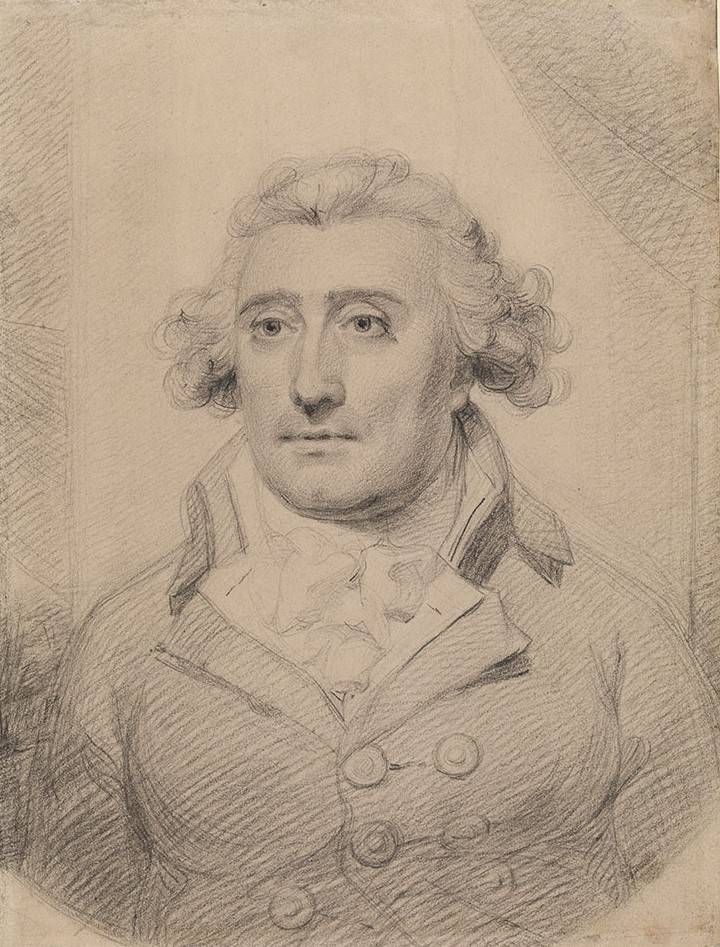 In January 1795 Joseph Farington went to Henry Singleton’s studio to sit for his portrait, it was to be included in Henry Singleton’s large-scale work The Royal Academicians in General Assembly which had been commissioned by the miniaturist, engraver and print publisher Charles Bestland.

Farington noted in his diary: ‘Singleton, I sat to for the last time… Miss Singleton, his cousin, was painting in the same room.’ This tantalising mention of Sarah Singleton places her, at work, in the same Haymarket studio as John Singleton whilst he was at work on his great painting for the Royal Academy. This gave her access to the 40 Royal Academicians and explains the present, characterful portrait of the great landscape-painter Philip James de Loutherbourg. This drawing, which shows de Loutherbourg in a different pose from the one John Singleton used in the finished painting, was published by Sarah Singleton in 1798 where it is specifically lettered: ‘Taken from the Life by Miss Singleton’. Sarah Singleton, a member of a professional artistic family which included her father William, her siblings Henry and Mary and her cousin, John was a successful professional miniaturist, as was her sister Mary. She exhibited works continually at the Royal Academy from 1787 until 1806, amongst her exhibits were a number of other portraits of Academicians, probably made as a result of her access to John Singleton’s studio, for example, in 1794 she showed a portrait of ‘the Librarian of the Royal Academy’ the medallist and modeller Edward Burch. This drawing offers important evidence of the work of a professional female painter at the end of the eighteenth-century and offers an intimate portrait of one of the leading European landscape painters of the period.