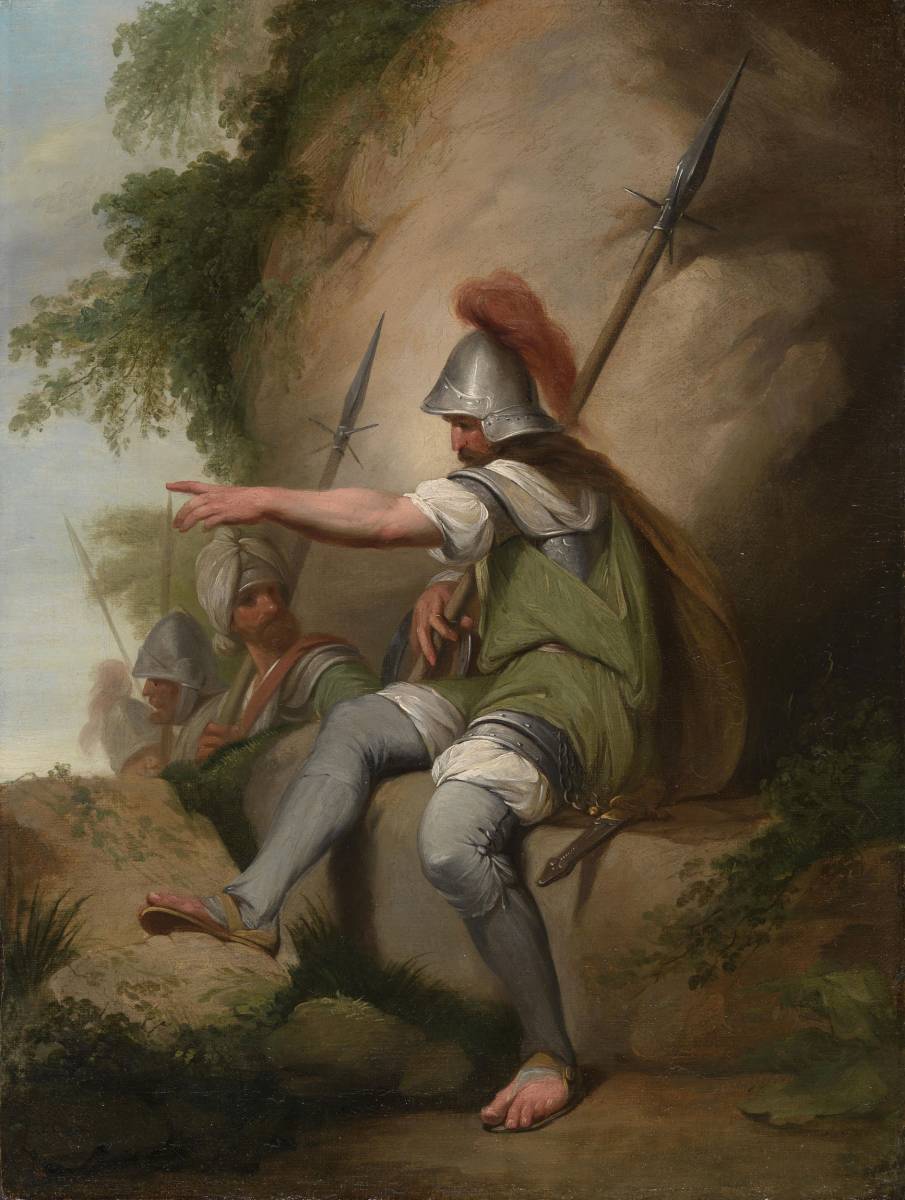 John Hamilton Mortimer was known in his own lifetime as the ‘English Salvator’ and consciously modeled his own life and works on the seventeenth century Italian painter, Salvator Rosa. This exquisite, little-known painting, eloquently demonstrates Mortimer’s debt to Rosa, the pose of the soldier being based on one of Rosa’s engravings, whilst the whole conception of ambiguous warriors in a landscape owes something to the genre of the banditti which was invented by Rosa. In its precision and delicacy of handling, as well as in its elegant composition, this small work demonstrates Mortimer’s attainment as a painter at the height of his career.

Salvator Rosa had a remarkable impact upon British painters during the eighteenth century, in terms of both his life and work. Biographers routinely cast Rosa as an outlaw, who had fought in the rebellion led by the Neapolitan fisherman Masaniello against Spanish rule in 1647. William Gilpin writing in 1768 observed: ‘we are told, he spent the early part of his life in a troop of banditti; and that the rocky and desolate scenes, in which he was accustomed to take refuge, furnished him with those romantic ideas in landskip, of which he is exceedingly fond…His Robbers, as his detached figures are commonly called [the Figurine series], are supposed also to have been taken from life.’[1] Such stories of Rosa’s life as a banditti fuelled the admiration for his prints and paintings, which, as Gilpin articulated, were seen as the embodiment of contemporary conceptions of the sublime.

For British painters it was the Figurine – a series of etchings of soldiers and genre figures, published from 1656 and republished and copied throughout the eighteenth century – were extremely well known to British collectors. His association with banditti was entirely fabricated, but it was a construct which had great appeal to Mortimer and his contemporaries. The critic Allan Cunningham noted on seeing Mortimer’s self-portrait, now known only from an etching, that he: ‘was fond of the wild, the savage, and the wonderful; and it was his pleasure…to imagine himself a chief of banditti.’[2] The present painting is compositionally close to one of Rosa’s etchings and was itself made into a plate by Mortimer and published in December 1778 as part of series of fifteen prints dedicated to Sir Joshua Reynolds. The print is labeled ‘Banditti taking his post’ and gives a title for the present work, which is known in another slightly smaller signed version now in the Detroit Institute of Arts as well as a copy by William Woodworth, which is at Liverpool University. A closely related pen and ink drawing by Mortimer formerly in the collection of Christopher Lennox-Boyd appears to have served as a template for Mortimer's etching.[3] It seems likely, given its superior quality, that the present painting was the first version and the Detroit canvas the second.

The appeal of banditti as a subject-matter is attested to by the volume of paintings, drawings and etchings of this sort exhibited by Mortimer during the 1770s. Far more numerous than his named history paintings, the non-descript compositions fuelled the imagination of early Romantic audiences; whilst the very real fear of encountering outlaws whilst travelling in Italy, and even Britain, inflected them with a sense of sublimity. The lack of narrative which contributed to the appeal of such pictures during the eighteenth century did not continue into the following generation. The remains of an early nineteenth century label on the reverse of the present picture identifies the subject as ‘Leonidas defending the pass of Thermpoylae, By Mortimer’. This suggests Mortimer’s anti-heroic outlaws were being recast as the ultimate Greek hero, Leonidas who commanded the Greek army at the battle of Thermopylae.