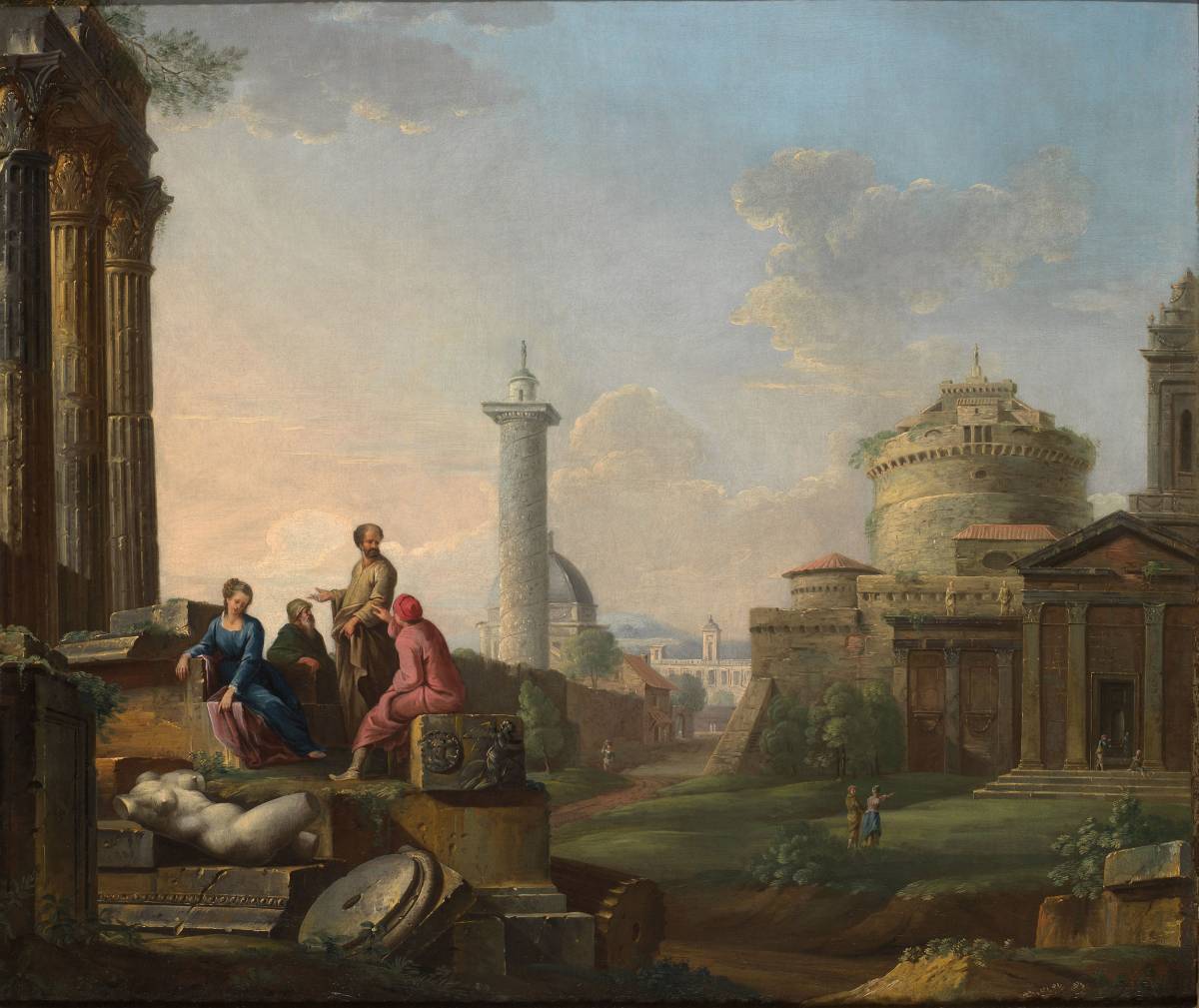 Arthur Devis is best known as a master of conversation pieces and full-length portraits in small scale, described by Sacheverell Sitwell as ‘the perfect small master of the school.’[1] His work as a painter of landscapes and architectural capriccios is less well known. This previously unpublished ruinscape, made in the manner Giovanni Paolo Panini, sheds important light on his early career and crucially, his working methods. Signed and dated 1736, Devis evidently retained an affection for the painting, incorporating it into at least two of his interior conversation pieces. This catalogue entry contains important new information on Devis’s early career and art training in the north-west of Britain in the 1730s, as well as reproducing extracts from the unpublished will of Devis’s daughter.

Born in Preston, Lancashire in 1712 Devis’s early training took place in the north-west where he worked with the Flemish painter Peter Tillemans. Tillemans seems to have spent time at Knowsley Hall in Lancashire in 1728-9, completing a number of spectacular landscapes depicting the house, park and James Stanley, 10th Earl of Derby’s racecourse.[2] It is clear from the surviving correspondence of the 10th Earl that Knowsley, with its substantial collection of old master paintings, became an important site for artists in the region.[3] We know at least one other of Tillemans’s pupils, one Edward Coppock, stayed at Knowsley learning to draw, and in 1736 George Stubbs arrived to copy paintings, supervised by his master, Hamlet Winstanley. According to Stubbs’s earliest biographer, Ozias Humphry, the first picture he attempted to copy at Knowsley was a ruinscape by Giovanni Paolo Panini.[4]

It is highly suggestive that at the same date Devis was also completing a work strongly influenced by the Italian painter Panini. Further investigation reveals that the present painting, which is not a copy of any existing Panini design, but is in fact a composition directly derived from a drawing by Hamlet Winstanley and contained in a sketchbook now in the Warrington Museum and Art Gallery. Winstanley had visited Italy in 1723–1725 and filled a sketchbook with topographical landscape drawings and subsequently produced a number of capriccio studies derived from these accurate drawings. One such sheet depicts the Castel Sant’Angelo behind a classical church and campanile identical to the buildings on the right hand side of Devis’s painting. Devis’s use of such an idiosyncratic set of structures seems certain to have derived from Winstanley’s drawing adding further to the supposition that Devis trained at Knowsley and continued to have contact there throughout his early years in Preston.

Turning to the painting itself, it appears to be a conventional digest of classic Roman monuments, arranged to form a fanciful ruinscape. On the far left of the composition are the three columns of the Temple of Castor and Pollux from the Forum in Rome; in the left foreground is the remains of a torso of Venus; prominently in the background is Trajan’s Column and behind it the dome of Santa Maria di Loreto; to the right a profile of the Capitoline and on the far right the group of buildings borrowed from Winstanley’s drawing. Standing amongst the ruins are a group of figures, in vaguely classical costume, in discussion. The works of Giovanni Paolo Panini were extremely fashionable amongst British collectors from the mid-1730s onwards, Devis’s painting and more importantly his conduit, in the form of Winstanley’s Italian drawings, were a very early instance of British artists imitating this format. In the following generation countless British painters would replicate Panini’s designs as decorative additions to interiors as new Palladian designs demanded painted overmantels and overdoors, but Devis’s signed and dated composition was absolutely at the forefront of this fashion.

Given the squareish format of the present painting it seems likely that it was designed as an overdoor. This is confirmed by Devis’s inclusion of the present composition in at least two of his earliest conversation pieces. The profile of the three columns from the Temple of Castor and Pollux, Venus’s torso and standing figures are visible in a painting placed above a door on the right-hand side of Devis’s early masterpiece the Crewe Conversation Piece. Painted in about 1742, it is widely regarded as Devis’s most important early work.[5] The present painting is also visible hanging over the mantelpiece in his painting of William Atherton and his Wife Lucy (Walker Art Gallery, Liverpool). D’Oench raised the possibility that this view may relate to a work by Devis, but did not explicitly link it with the present painting despite the picture hanging in the Atherton Conversation Piece precisely replicating the right-hand side of the present composition.[6] The existence of another ruinscape by Devis in the manner of Panini of a similar size, also signed and dated 1736 (last recorded on the London market in 1939),[7] makes it highly likely that the present picture is the one mentioned in the will of Devis’s daughter, Ellin Devis:

'2 Ruins of Rome after Panini painted in the [first] part of my dr ffathers life and given to me by my uncle Anthy.'[8]

Anthony Devis was Arthur Devis’s younger half-brother; he practiced as a landscape painter in Preston and later London and may have retained the two capricci paintings when Arthur moved to London in 1742. Other than nine landscape works in watercolour by Devis included in Tillemans’s sale in 1733 – which included copies after van Bloemen, Panini and Ricci and all remain untraced – no other imitations or copies by Devis are known strengthening the identification of our picture as one of those mentioned in Ellin Devis’s will.[9]

Exceptionally finely executed, this painting is important for our understanding of Devis’s early career. It raises the possibility of his contact with Hamlet Winstanley in about 1736 - and therefore with George Stubbs – giving a context for his early work at Knowsley and is a crucial clue in understanding his work as a painter of decorative overdoors. Its presence in Ellin Devis’s will and appearance in a number of his most significant early composition also underscores the importance of the work to Devis himself. For an ambitious and highly talented artist competing for patronage in London in the 1740s without having travelled to Italy it would have served as a powerful testament to his Continental sophistication and abilities to master fashionable Italianate models.