This remarkable portrait celebrates Jonathan Richardson’s close relationship with Jonathan, his son, but above all his lifelong veneration of John Milton and his poetry. Richardson shows himself, his son, by this date a celebrated author, in the presence of John Milton who is crowned with laurel leaves and illuminated by a ray of heavenly light. This painting belongs to the most fascinating moment in Richardson’s career, after his retirement, when he focused more on writing and undertook a concerted campaign of self-portraiture. The painting commemorates the publication in 1734 of Explanatory Notes and Remarks on Milton’s Paradise Lost; authored by Richardson father and son, the text takes the form of a biography of Milton and general discussion of Paradise Lost, followed by over 500 pages of remarks on selected lines from the poem. As such, this portrait offers a remarkable statement about Richardson’s self-fashioning as a writer, painter, father and major intellectual figure in Augustan Britain.

Jonathan Richardson rose from modest beginnings – he was the son of a London silk weaver – to become one of the most successful portrait painters of his generation. His sitters included many luminaries of the late Stuart and early Georgian period and he befriended some of the most remarkable writers of his generation, particularly Alexander Pope. According to his son, Richardson had twice been ‘powerfully invited’ to be the King’s painter, but had refused because of his ‘aversion to what he called the slavery of court dependence.’[1] He authored the pioneering Theory of Painting in 1715 and the Two Discourses in 1719 and was a director, from its foundation, of the Great Queen Street Academy. On Richardson’s death in 1745, the chronicler of the early Georgian art world, George Vertue remarked that: ‘this was the last of the Eminent old painters. that had been contemporyes in Reputation – Kneller Dahl Jarvis & Richardson for portrait painting.’[2]

From 1728, until his death in 1745, Richardson retired from his portraiture practice, but in its place undertook an extraordinary sequence of self-portraits. It was not until the sale of the collection of Richardson, the Younger in 1772 that the extent of his activities as a self-portraitist were revealed, prompting the writer Horace Walpole to observe that: ‘after his retirement from business, the good old man seems to have amused himself with writing a short poem, and drawing his own or son’s portrait every day.’[3]Whilst numerous drawings survive, Richardson produced very few painted self-portraits, of which this is one of the most extraordinary.

Richardson shows himself without a wig, wrapped in a loose gown, an ink pot and paper before him, standing with his son, who is similarly shown wigless. Arranged in a landscape behind a parapet, the two Richardsons are arranged next to Milton. The poet’s likeness is derived from a pastel by William Faithorne which belonged to George Vertue. Richardson knew the portrait well, producing an engraved copy for the frontispiece of Explanatory Notes and Remarks on Milton’s Paradise Lost in 1734 noting: ‘tis done from a Picture which I have reason to believe he sate for not long before his Death, I have therefore given a little more Vigour to the Print.’[4] A finely worked copy in plumbago on vellum by Richardson is included in this catalogue. Richardson shows Milton crowned with laurels, wrapped in a purple velvet cloak and illuminated by a shaft of celestial light.

Richardson first encountered Paradise Lost when training in the studio of John Riley: ‘happening to find the First Quarto in Mr Riley’s Painting-Room was Dazzled with it, and from that Hour all the rest (Shakespeare excepted) Faded in my Estimation, or Vanish’d.’ The result of Richardson’s devotion to Milton was Explanatory Notes, a book he worked on closely with his son. Richardson explained the purpose of their commentary on passages from Paradise Lost in distinctly pictorial terms. He argued that the novelty of their approach:

‘is Necessary to the Understand of an Author when he speaks to the Imagination, and would Convey the Image Himself Sees. Milton was as Great a Master in This Kind of Painting as Ever Was; but Few have Pencils to Copy his Images in their Own Minds; we have Endeavour’d to Assist Such.’[5]

The commentary relied much on the erudition of Richardson junior, who had been responsible for much of the research for the hugely successful Account of Some of the Statues, Bas-reliefs, Drawings and Pictures in Italy which had been published in 1722 and rapidly became the standard account of art on the Grand Tour. Richardson laid great stress on his reliance on his son’s knowledge of Latin texts and philological derivations, this gave rise to a satirical drawing by Hogarth. But modern literary scholars have been more forgiving, suggesting that the Richardsons’ commentary was ‘based on a much broader and profounder conception of Milton’s poetry’ than that of earlier authors.

The present portrait seems likely to have been made to celebrate publication of Explanatory Notes. It shows the two authors presumably with the manuscript of their work standing next to their idol. There is no obvious visual precedent, either in religious or secular painting, it is a completely singular concept, combining as it does, a self-portrait, a portrait and historical portrait to form a modern poetic allegory. 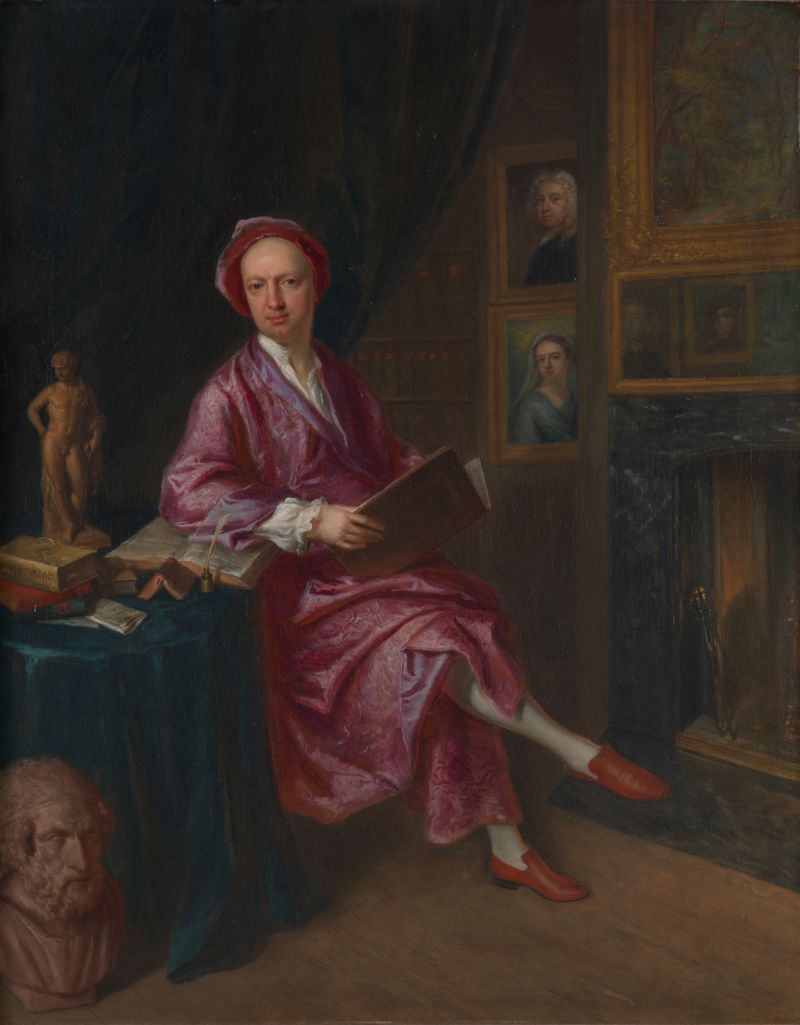