This large, grandly worked head study in black chalk was made by George Romney during his time spent studying in Italy. A rare and important drawing, this double-sided sheet belongs to a group Romney made in Rome and almost certainly represents the head of King Lear, on the verso is a characteristically fluid ink study of a prostrate woman.

From the beginning of his career Romney entertained ambitions of becoming a successful history painter, producing a treatment of King Lear in the Tempest tearing off his Robes in around 1762, a painting which he entered into a lottery to enable him to move to London. Throughout his professional career Romney continually returned to favourite subjects from Shakespeare, repeatedly making bold compositional studies. Large-scale treatment of heads such as this are far rarer and suggest Romney’s renewed commitment to becoming a historical painter whilst he was studying in Italy. As such, this sheet offers an important opportunity to consider the role drawing played in Romney’s development as an artist.

On moving to London, Romney's twin goals were material success and artistic fame. As Alex Kidson has described, Romney set out to succeed, as an history painter, devoting most of his first year in London to labouring on two unwieldy canvases, The Death of Rizzio, which he destroyed and The Death of General Wolfe, which remains untraced. The latter work—the first treatment in British art of the subject—achieved considerable notoriety when, in an atmosphere of political intrigue, the Society of Arts first awarded it and then withdrew its second prize for history painting. Kidson characterised the episode as a failure, pushing Romney down the more commercially lucrative route of portraiture.

In March 1773 Romney travelled to Rome in the company of the painter Ozias Humphry. In Italy he spent a great deal of time studying the works of Raphael, both the frescos of the Vatican Stanze and Raphael’s great altarpiece the Transfiguration. On their arrival in Rome, Humphry and Romney found that the Welsh painter William Parry ‘had a scaffold and other conveniences erected’ before the Transfiguration in San Pietro in Montorio. Romney took advantage of the scaffolding to make copies of sections of the painting, John Romney noting: ‘while employed in this laborious undertaking, the monks, at their stated periods of worship, used to come and prostrate themselves at the altar immediately under him, without interrupting him any respect, or being themselves interrupted.’

As Nancy Pressly identified in 1979 Romney made a sequence of large black chalk studies of heads which relate to his study of Raphael.[1] Pressly published a head at the Yale Center for British Art which she related to one of the pursuing Angels in Raphael’s Expulsion of Helliodorus from the Stanza di Eliodoro, noting that Romney intended it as a preparatory treatment of the head of Edgar from King Lear. Another sheet, now in the Folger Shakespeare Library, has been identified as a study for Lear and loosely based on one of the Apostles from the lower half of the Transfiguration. To these we can add the present boldly worked black chalk head which derives from Romney’s intense study of the lower half of the Transfiguration and shows him working on the expressive possibilities of a further treatment of a subject from Lear. It is telling that all three head studies are in black chalk on the same textured, Roman paper and all three relate to the story of King Lear, suggesting Romney was seriously contemplating another treatment of the subject. 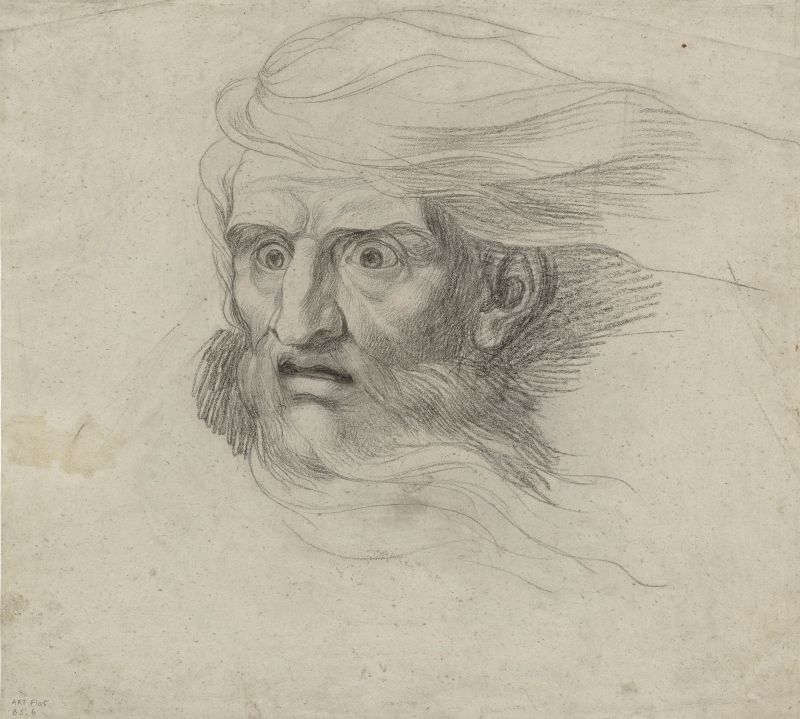 In Rome Romney had considerable contact with other artists, above all Henry Fuseli, who in kindling his future energies as an imaginative draughtsman provided perhaps the most profound and lasting influence of the entire trip. Fuseli, who was a remarkably inventive iconographer was then engaged in designing interior frescos in the manner of the Sistine chapel devoted to the plays of Shakespeare, would undoubtedly have encouraged Romney to use the materials he gathered from his study of early masters in his conception of new history paintings. This large-scale head study is therefore rare evidence of Romney’s determination to pursue history painting whilst studying in Italy made shortly before he began his sequence of large-scale historical cartoons now in Liverpool.

On his return to Britain Romney continued to experiment with compositions derived from King Lear, making drawings of Lear Awakened by Cordelia and variations of King Lear in the Tempest, but he seems never to have painted another treatment of the subject. Romney’s historical drawings increasingly became separate to his work as a painter, a leisure activity, rather than strictly preparatory for finished paintings. This sheet belonged to Romney’s son, John, who numbered it prominently on the verso ‘158’, it seems likely to have been included in the sale of his daughter Elizabeth’s drawings, where it was acquired by the South African collector Alfred de Pass where it was no.45 in the album of drawings he assembled.