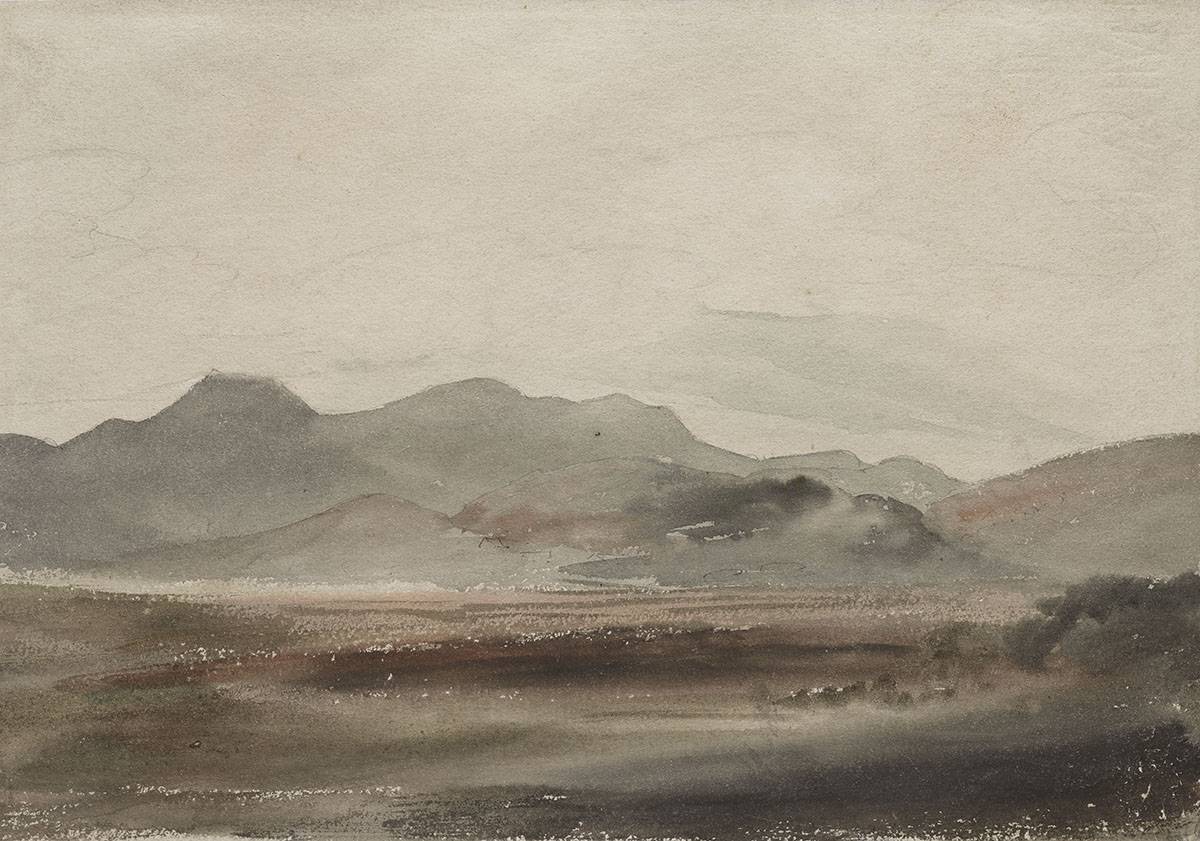 This remarkably fluid and vaporous watercolour dates from Cornelius Varley’s second tour to Wales in 1803. Almost certainly painted en plein air, this view of Snowdonia demonstrates Varley’s mastery of watercolour, capturing the complex recession of landscape with bands of saturated wash. Preserved in spectacular condition, this is one of Varley’s most impressive watercolours from his 1803 visit to Wales.

Cornelius Varley was a landscape painter and inventor of optical apparatus, born in London he was the third of five children of Richard Varley. Varley's elder brother, John, became a famous watercolour artist and his younger sister, Elizabeth, married the artist William Mulready. Following an apprenticeship to his uncle, Samuel, a watchmaker, Varley began to make lenses and microscopes. He was a largely self-taught artist, who learnt by sketching from nature in the company of his brother John. In June 1802 Varley travelled to north Wales with his brother John and Thomas Webster. He returned to Wales in 1803 with the artists Joshua Cristall and William Havell when this drawing was made. Varley’s sketches from these trips constitute some of his most significant output.

The present view demonstrates a radical departure from the picturesque and topographical conventions of watercolour painting. Varley was strongly influenced by the works of Thomas Girtin, particularly Girtin’s practice of sketching from nature in all weathers, having apparently seen him ‘sitting out for hours in the rain to observe the effect of storms and clouds upon the atmosphere.’ The present watercolour precisely captures Varley’s interest in atmosphere and its effects upon landscape; Varley’s use of a highly saturated wash imparts a sense of the verdant Welsh landscape moments after a downpour. Generally the sketches he made at this date were left unfinished, which suggests that the impulse behind them was as much scientific curiosity as artistic feeling. This watercolour is an unusually complete statement and one of the most aesthetically compelling from his 1803 Welsh tour. There is some evidence that Varley exhibited even informal, impressionistic landscape studies such as this and growing scholarly consensus that it these ‘on the spot’ works had a seismic impact on the young John Constable when he viewed them at the Society of Painters in Watercolour exhibition in 1805. In the second half of the twentieth century, his work became appreciated for its freshness and its role in pioneering a ‘naturalistic’ mode of landscape painting. Watercolours such as this are remarkable for their attention to to changing atmospheric effects.