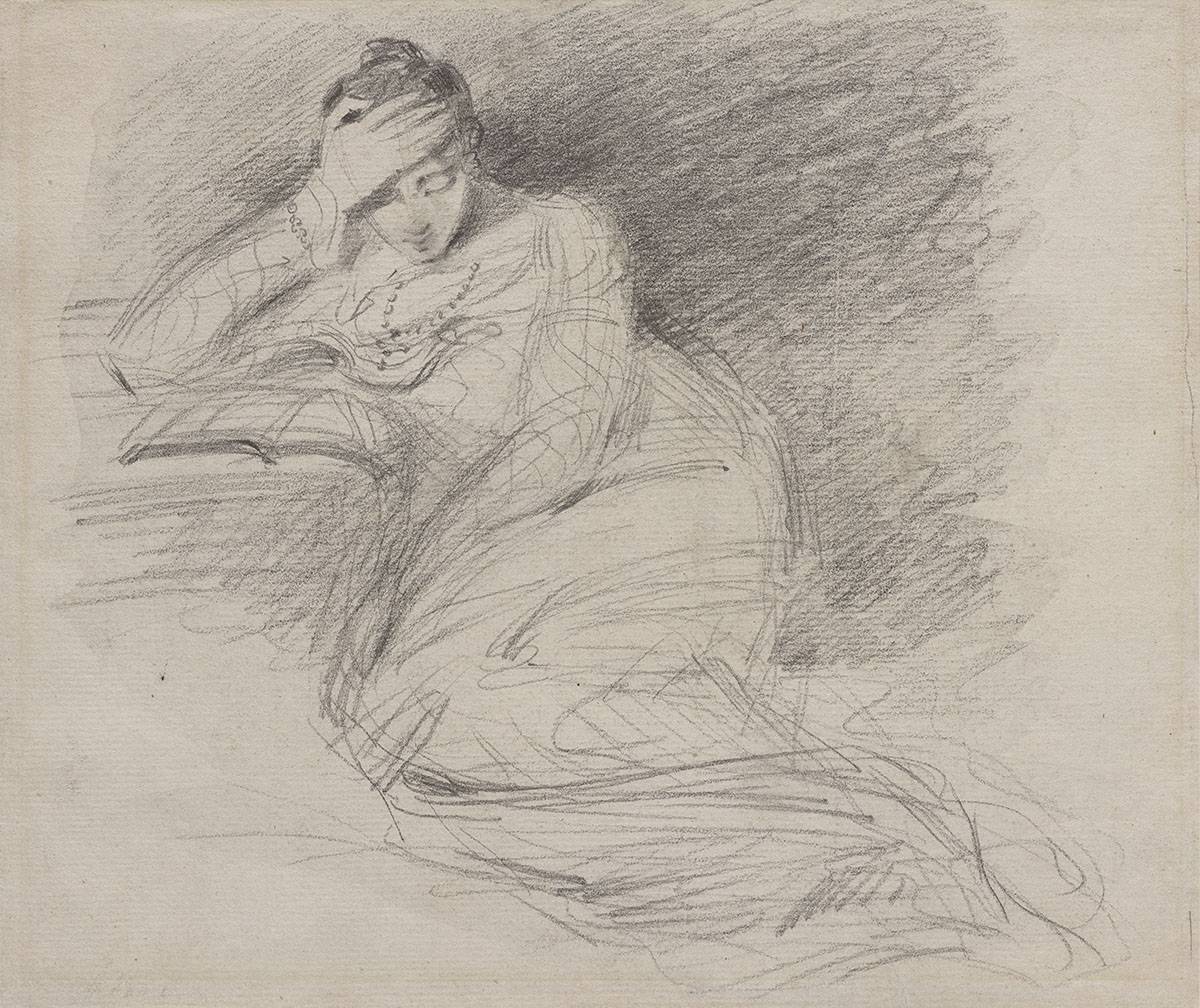 This charming, informal study of a woman reading was drawn by John Constable in 1806. During that year, he made a number of portraits and a series of intimate figure studies of his friends and relations at leisure. It fits into a group of studies of young women Constable made in around 1806. During this period Constable made frequent visits to the Cobbold, Hobson and Gubbins families and made portraits of members of the Harden and Lloyd families, any of whom may have provided the model for this sensitive study. The intimacy of the pose, the woman appears to be reclining, her feet drawn up and her elbow resting on a low surface, attentively reading, supporting her head in her right hand. That this drawing was probably made in the evening is suggested by the shaded background. Constable has worked rapidly to capture the sitter apparently unawares, starting with the gesture of the supporting hand, as a consequence Constable has made it slightly larger and out of proportion with the rest of the body.

The drawing may well depict one of Constable’s three sisters. Only one, Martha, married (to a London cheese-monger named Daniel Whalley). He does not seem to have been particularly close to his eldest sister, Ann, who was eight years his senior, but Constable was close to his younger sister, Mary. She is shown in a vigorous head study of 1806 and now in the Victoria and Albert Museum, with her dark hair, large eyes and pronounced, straight nose, she could well be the sitter in the present drawing. Mary was the only member of the family to address Constable in letters as ‘Dearest Johnny’, and it as Mary who was dispatched to keep him company in 1812 in his London lodgings in Charlotte Street.

1806 saw Constable undertake a series of portrait commissions, perhaps conscious of the need to broaden the scope of his artistic practice. Constable made a portrait of the daughters of William and Anne Mason, which shows them engaged in a series of genteel leisure activities, including sewing and reading. He also travelled to the Lake District in September and October where he made a series of informal sketches of his travelling companions reading, playing musical instruments or in quiet repose. Constable’s figure drawings of 1806 are unique in his output as an artist, they seem to reflect the unusually busy and social year. He spent time earlier in 1806 with the Cobbolds of Ipswich, then with his uncle, aunt and cousins the Gubbins at Epsom, and for over a fortnight in June and July with a building contractor named William Hobson and his family at Markfield House, Tottenham. Two intact sketchbooks survive intact from his Epsom stay, the present sheet is almost certainly from a larger, dismembered sketchbook. Scholars have long pondered of the significance of this rare and important body of figure studies in Constable’s oeuvre. One answer was his anxiety to forge a practice as a portrait painter. But as Anne Lyles has recently observed: ‘they, also, however, seem to show signs of sheer pleasure in recording his human surroundings.’ Particularly tenderly observed, the present drawing gives a rare and enchanting view of an educated middle-class woman at leisure in the age of Jane Austen.