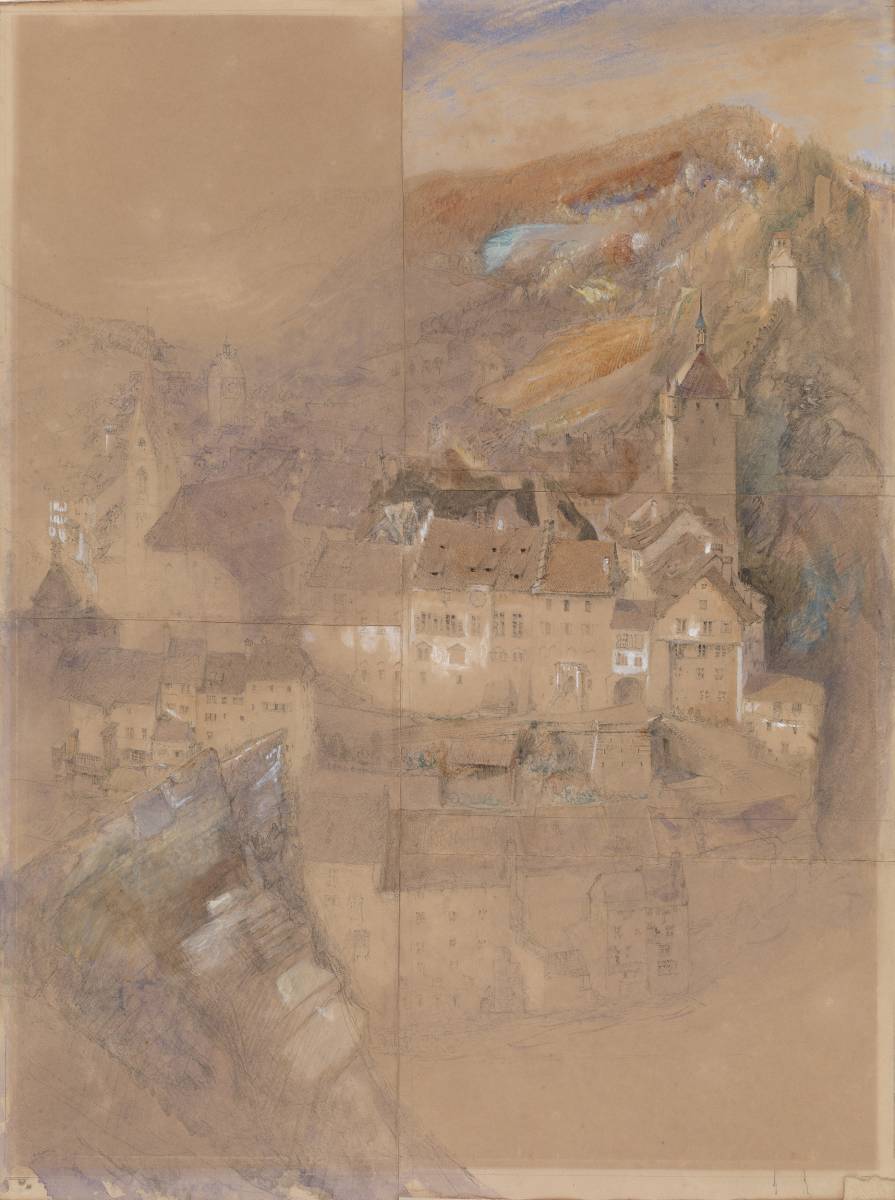 This remarkable drawing was made on the spot by Ruskin whilst visiting Switzerland in the summer and autumn of 1863. Ruskin was consciously following in the footsteps of Turner and was preparing views of Swiss towns to be engraved. This vertiginous, aerial view of Baden is one of the most ambitious and visually complex compositions he made whilst on the Continent. The complex composition was one on which Ruskin expended a great deal of time and effort. Writing in his notes on Turner’s The Harbours of England, Ruskin observed: ‘to compare my boy’s drawing of the Swiss Baden… made when I was sixteen, with the hard effort to get it right, in [the present drawing] – coloured only in a quarter of it before the autumn leaves fell – then given up – cut into four – [and] now pasted together again to show how it was meant to be.’[1]

During the 1850s Ruskin was cataloguing the Turner Bequest. Ruskin became particularly interested in Turner’s late Swiss watercolours.[2] Ruskin became keen to retrace Turner’s steps and see the towns Turner had painted. In mid-October 1863 Ruskin returned to northern Switzerland, basing himself at the Hotel Städthof in Baden for almost a month, he made frequent excursions by train to nearby Lauffenburg and Brugg where, as he reported in a letter, ‘I am drawing as hard as I can.’[3] At the same time he produced a series of important drawings of Baden itself, the most ambitious of which was the present work.

In this hugely impressive drawing Ruskin selected as his view-point a position high on the bank of the river Limmat, looking west. The sheets show, on the left hand side the town’s principal Catholic parish church, while on the right is the Stadtturm – a defensive tower with distinctive corner turrets that forms the first part of the town’s fortifications– which is seen rising up into the distance and following the contour of the hillside above. Ruskin took a position from which to draw the city that allowed a downward view and in which the tiled and dormered roofs form a complex pattern of multi-faceted surfaces. Ruskin preferred these high, almost bird’s eye perspectives in his Swiss views. In the distance Ruskin carefully has carefully delineated rust coloured woodland and a meadow, the shadowed surface of which in the lea of the trees has been treated with a vivid touch of blue. In the foreground appears an outcrop of rock, the striations of which point to Ruskin’s profound interest in geology.

Ruskin’s claim that he made the drawing, cut it up and then reassembled has caused scholars some problems. It has long been asserted that each sheet is from a separate sketchbook page, worked on individually and then assembled and mounted together.[4] Whilst Christopher Newall has suggested that: ‘[A] possible explanation for the curiously composed sheets of paper was that Ruskin began the drawing on a single sheet – probably either that which forms the central right-hand compartment of that at the upper right – and without any clear idea of what the eventual scale and scope might be, but then as his attention wandered more widely across the panorama that lay before him more space was needed that could only be provided by tacking on further sheets.’ This seems less likely. Paul Walton has more persuasively offered, that: ‘after completing the pencil drawing on a rather large sheet he found it more convenient in his increasingly exposed location to continue with the application of watercolour on smaller pieces of paper. According to a diary entry they were not reassembled until 1873.’[5]

Ruskin had travelled to Switzerland to encounter the landscape of Turner, he had discovered a panoramic breadth which he handled in sheets such as this with a minuteness closer to contemporary Pre-Raphaelite artists. Towns such as Baden also offered a Medieval reality untouched by modernity which appealed to Ruskin’s antiquarian instincts. It was a reality under threat, as he wrote to a Swiss friend in 1863: ‘I am working [at Baden] and at Lauffenburg with a view to getting some record of these two fine old towns, before they are utterly swept away as others are in Switzerland.’[6] This astounding drawing is undoubtedly one of the masterpieces of Ruskin’s time in Switzerland, in its breadth of topography and atmosphere, detail and fluid execution it is a perfect distillation of Ruskin’s fascination both with Turner and a newer generation of landscape artists.