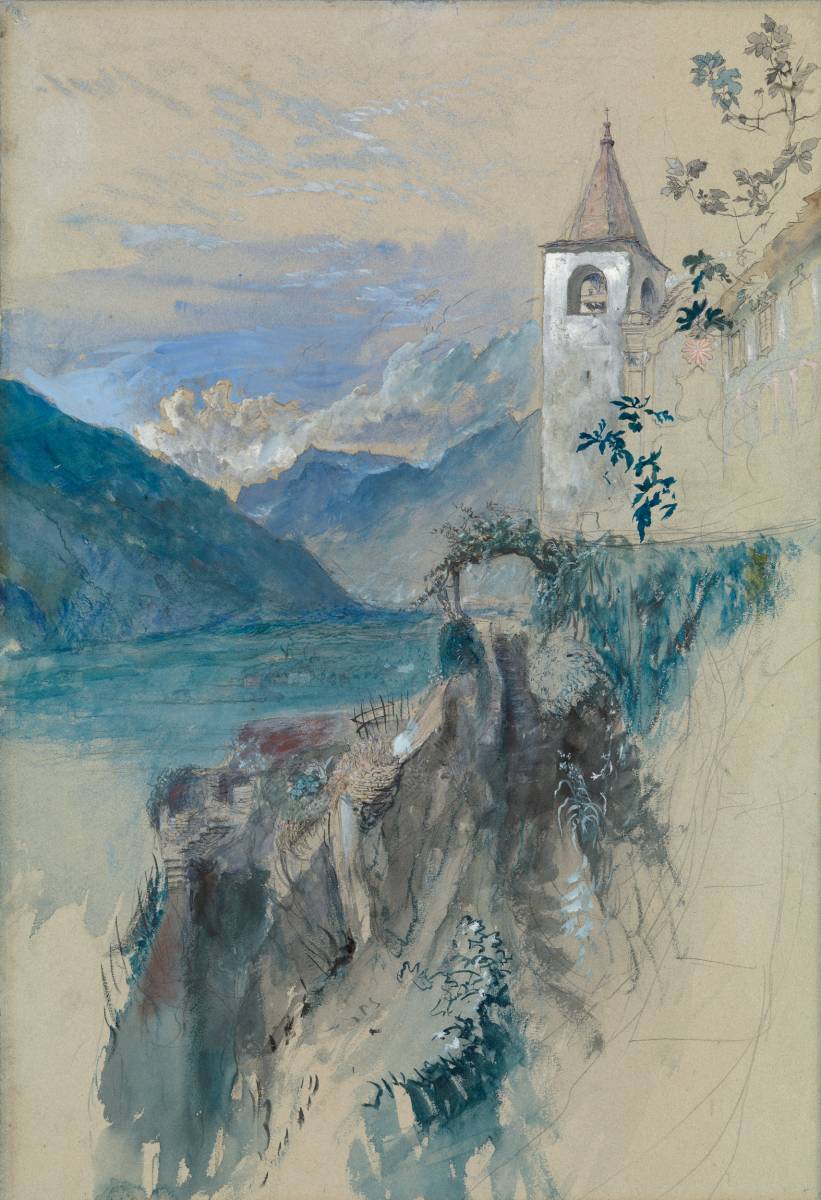 This highly impressive watercolour is one of the most important compositions completed by Ruskin during his painting trips to the Alps during the 1850s. Whilst the view chosen represented a deliberate homage to Turner, Ruskin’s Bellinzona offers an important visual departure from Turner’s atmospheric watercolours. Ruskin’s palette, approach to composition and form all point towards his increasing interest in the world of the Pre-Raphaelites. The gestation of this exceptionally well documented sheet was frequently mentioned in Ruskin’s extensive correspondence and it was a watercolour of which Ruskin thought exceptionally highly. Ruskin gave this work to his mother and in 1866 he and his mother presented it to the Rev Daniel Moore. Ruskin’s parents had first met Moore and his wife in Paris on a Continental trip in 1851 when the party went on to tour through Switzerland together. Ruskin thought he was a 'most agreeable companion.’  The Ruskin family attended the Camden Chapel where Moore was minister and this drawing was presented to him on his retirement.

After crossing the Alps in 1845 Ruskin was unimpressed with Bellinzona, but he was subsequently won over by the charm of the place and in his first selection of a hundred watercolours from the Turner Bequest, Ruskin selected, with a view to demonstrating the value of exhibiting unfinished sketches, eight views of Bellinzona. In the accompanying catalogue he described Bellinzona as 'on the whole the most picturesque in Switzerland, being crowned by three fortresses, standing on isolated rocks of noble form, while the buildings are full of beautiful Italian character.’[1]

Arriving on 12 June 1858 Ruskin now found Bellinzona 'quite like a wonderful dream.’ He remained in the town until the 8 July and it was during this stay that the present drawing was executed. From Bellinzona Ruskin drove to the head of the lake, and took the steamer for Baveno and the Isola Bella, from where on the 8 July Ruskin wrote to his father about the execution of the present drawing:

'I went every evening to draw his [the priest's] garden; and where, by the steps cut in its rock, and the winding paths round it, and the vines hanging over it, and the little patch of golden corn at the bottom of it, and the white lily growing on a rock in the midst of it, and the white church tower holding the dark bells over it, and the deep purple mountains encompassing it, I got so frightfully and hopelessly beaten. It was partly the priest's fault too, for he cut down the lily to present to the Madonna one festa day-not knowing that it was just at the heart of my subject-and a day or two afterwards he cut his corn ... which took away all my gold as before he had taken all my silver, and so discouraged me.'[2]

As with many of his most important compositions at this date, Ruskin was beset with doubts and the problem of trying to capture the whole experience of the place. He was continually comparing his work unfavourably with that of Turner. In a letter to the painter John Frederick Lewis on 6 August 1858 Ruskin calculated that 'it would take to finish the drawing ... Fifteen years, six months & some days'.[3]This was humorous reiteration of a genuine dilemma, as he explained to his father: '... my standard is now too high to admit of my drawing with any comfort, as least unless I gave up everything else for it.’[4]

The vivid watercolour, originally executed on blue paper (now faded), is in fact far from Turner in its touch and approach. The rich palette, architectural structure (heightened by Ruskin’s use of a strong vertical composition) and the almost abstract details, such as the pattern of silhouetted leaves, point to Ruskin’s visual innovation.

Ruskin considered the composition significant enough to present it first to his mother and then to his friend the Rev. D. Moore. The letter accompanying its gift to the latter explained:

I have made no drawings at any time but for notes of fact: more for pleasure of sketching – so that I have had great difficulty in finding one that seemed the least fit for presentation to you. Nor can I ever conceive any one taking any pleasure in my imperfect work. However the sketch I send looks pretty well at a distance, and it is of an interesting scene enough, in its way. the little rocky garden & the view of village near Bellinzona - which being much too steep for the old priest to trouble himself by walking- much less working in - had near perished by drought when I sketched it- though a mountain stream dashed by only a hundred yards below.- from which- when I was tired of drawing, my guide & I brought up sundry bucketsfull of snow  water to the poor garden- much to its refreshment- and the villagers' astonishment and our own piece of mind- for that afternoon. The valley in the distance is the ascent access to the pass of the St Gothard.- you are looking north.

This sketch belonged to my mother but she likes you to have it. & so do I, if you like it. I wish the fig leaves had stalks to them (or stitches together at any rate), but I got tired at the time of the tailoring and I can’t do it now rightly.