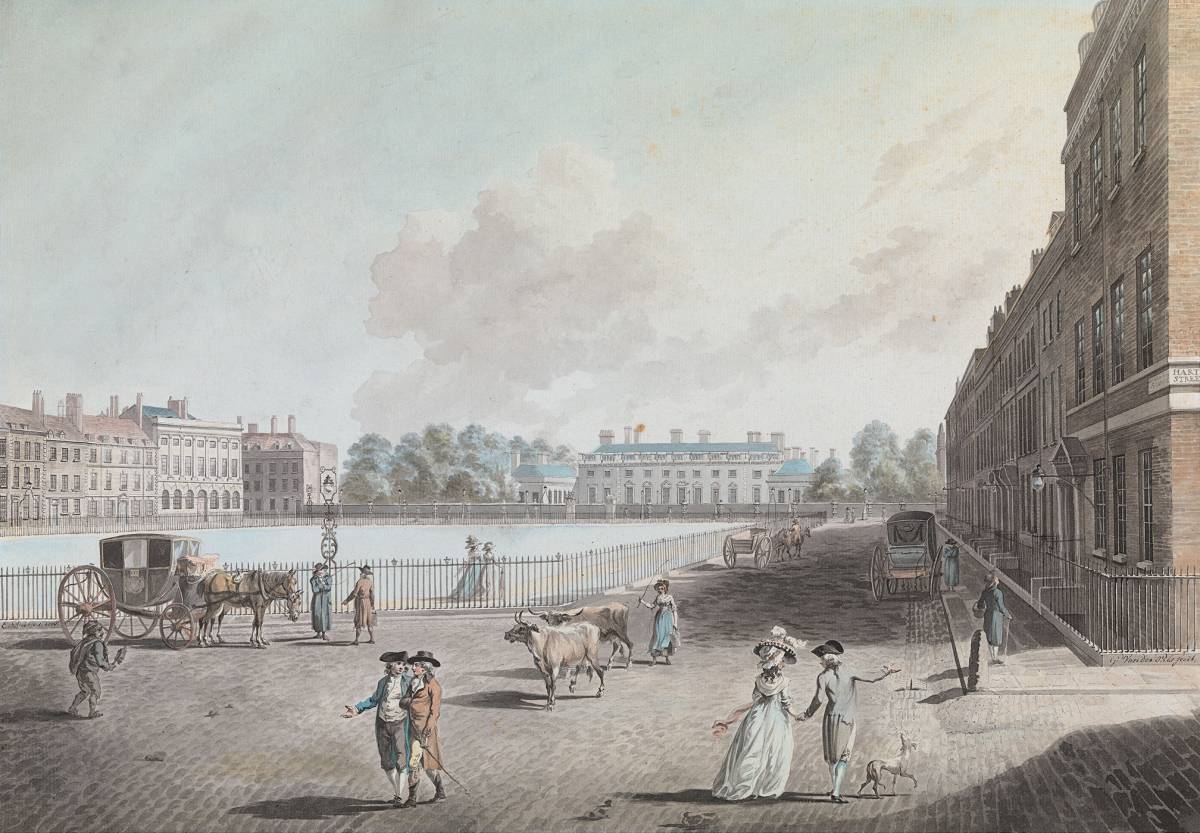 This exceptional image of Bloomsbury Square was drawn by Edward Dayes in 1787 and formed one of a series of four images Dayes made of modern London squares for the entrepreneurial engravers and publishers Robert Pollard and Francis Jukes. Dayes captures the square from the south eastern corner, looking from Hart Street across to the façade of Bedford House at the northern end. A master at capturing the urban character of London, Dayes has populated the square with elegantly dressed figures, tradesmen and somewhat unexpectedly, a milkmaid herding cattle. Preserved in spectacular condition, this beautifully fresh watercolour was painted in preparation for the aquatint published by Pollard and Jukes as part of a sequence which also included views of Hanover Square, Queen’s Square and Grosvenor Square. The project also involved a line engraver, Robert Thew, who is recorded on the published print as being responsible for the ‘outline’ which he ‘sketched with an instrument.’ Dayes may have been helped to achieve the complex foreshortening of the terrace on the eastern side of the square by Thew, employing some form of perspectival instrument, such as a camera lucida, but the presence of the signature of the Dutch engraver Gerrit van der Pals on the sheet raises the possibility that he was responsible for some part of the project.

Dayes began his working life in the workshop of an engraver. Born in London to a family of skilled craftsmen – his grandfather had been a staymaker and his father a turner – Dayes in turn, began his career apprenticed to William Pether. This early training meant Dayes was acquainted with the commercial print trade, a sector which would provide financial stability throughout his career. In 1780 Dayes enrolled at the Royal Academy schools, which had recently moved to new premises in Somerset House. In later life, Dayes recounted meeting Joshua Reynolds at the Royal Academy noting that he saw: ‘many of his best pictures fresh off the easel’ adding: ‘at the time I made the drawing of the KING at ST PAUL’S, after his illness in 1788, Reynolds complimented me handsomely on seeing them; afterwards observed that ‘the labor bestowed must have been such, that I could not be remunerated from selling them; but if I would publish them myself, he would lend me the money necessary, and engage to get me a handsome subscription among the nobility.’[1] Dayes had made a pair of wash drawings commemorating a service of thanksgiving for the recov­ery of George III from illness which, despite his anecdote, seem likely to have been conceived as prints and were in fact published in 1790 by Robert Pollard.

It was as a topographical draughtsman that Dayes began his career and his watercolours of London street scenes populated with fashionable figures are some of the most impressive images of the city made in the late eighteenth century. Dayes’s fame as a topographical artist resulted in him taking on the young Thomas Girtin as an apprentice in 1789. His technique followed that of other watercolourists of the period: first he would make a careful outline drawing of the scene and then apply grey/blue washes with the brush to build up the tonal values only then would he use coloured washes to complete the image. This depiction of Bloomsbury Square demonstrates Dayes’s careful delineation of topographical details: despite the foreshortened angle, each house on the eastern side of the square is clearly identifiable.

Bloomsbury Square was developed as a fashionable residential area in the decades after the Restoration, initially by Thomas Wriothesley, 4th Earl of Southampton and latterly by his descendants, the dukes of Bedford. Dodesley described the square in London and its Environs Described in 1761 as having: ‘been lately embellished with many good houses, and the grass plats in the middle surrounded with neat iron rails. The north side is entirely taken up with Bedford House, which is elegant, and was the design of Inigo Jones.’ Dodesley mentions that one wing of the building contains a gallery housing James Thornhill’s copies after the Raphael Tapestry Cartoons, Dodesley ignores the other treasure, the twenty-two views and two larger festival subjects by Canaletto which were arranged, according to a 1771 inventory, between the Little Eating Room and the Large Dining Room. Pollard and Jukes dedicate their print after Dayes’s watercolour to Francis Russell, 5th Duke of Bedford, but the square was home to a number of other significant public figures, including the earls of Chesterfield and Mansfield.

This image of Bloomsbury Square can also be viewed as a powerful piece of urban propaganda. Dayes shows a contented, ordered Georgian townscape: elegant figures and respectable tradesmen, including a crossing sweeper, walk in the wide, clean cobbled streets. Even the fresh-faced milk maid herding her cattle in the centre of the composition suggests the wholesome nature of the area, fringing, as it did, the semi-rural pasture which ran south to Highgate and Hampstead. The reality was more complex. Eight years before Dayes made his view, the Gordon riots had erupted across London and Lord Mansfield, then the Lord Chief Justice was targeted. His house on the North Eastern corner of the square was looted and destroyed, the rioters burning in the process Mansfield’s considerable library and gallery of pictures. Once the riots were quelled two of the perpetrators, Charles Kent and John Gray, were taken to Bloomsbury Square where gallows had been erected in front of the remains of Mansfield’s house. The hanging took place before a large crowd, standing on the very spot where some of the worst of the rioting had raged. Dayes’s carefully sanitised view gives no hint of this violence or of the social and political unrest which had destabilised Britain in the period. As such, topographical views of London such as this, must be viewed as more complex and politically charged than has commonly been the case.

The addition of the name of the Dutch engraver Gerrit van der Pals on the bottom right of Dayes’s drawing of Bloomsbury Square points to the collaborative nature of this kind of project. It may be that Jukes and Pollard had initially employed van der Pals as an engraver, although the fact that the signature is accompanied by ‘fecit’ points to a more instrumental role. Van der Pals is a relatively unknown figure who worked in Rotterdam producing detailed watercolours and engravings of Dutch townscapes, whilst he was not previously known to have worked in London, the connections between Holland and Britain in the period do not exclude the possibility. The published plate makes no mention of van der Pals, but does include mention of Robert Thew who was apparently responsible for drawing the outline with ‘an instrument.’ It may be that Dayes relied on van der Pals or Thew to operate an optical device that laid in the complex perspective of the composition. The presence of van der Pals’s signature poses an important question about collaborative practices in the print-trade in the period and the European nature of the London art world.