This exquisite oil was painted by Turner following his first trip to the Continent in 1802. Commissioned by Turner’s great patron, Walter Fawkes and unusually painted on panel, this evocative landscape is preserved in outstanding condition. The brief cessation of fighting between Britain and France in March 1802 allowed Turner to visit the Continent for the first time.

The trip afforded Turner the opportunity of experiencing new types of terrain, most importantly the Alps. Turner filled eleven sketchbooks with studies during his trip, making numerous watercolour sketches of the town of Bonneville, close to Geneva. Bonneville was a non-descript settlement, but it offered Turner his first view of Mont Blanc, the highest mountain in the Alps and as a result a wholly new form of landscape. Painted in London this exceptional painting belongs to a key moment in his career, Turner had recently been elected a Royal Academician and he was rapidly becoming the most successful professional landscape painter in Britain. In his view of Bonneville, with its shimmering, limpid light and vaporous recession of the distant mountains, Turner neatly communicates, in oil, all the qualities of his finest watercolours of this date. Oils by Turner are increasingly rare on the market and this example is one of the best preserved and best documented examples from a key moment in his career.

The Peace of Amiens, signed in March 1802, meant that, for the first time in some nine years ordinary travellers were again able to cross the channel, and Turner was among the many British artists who flocked to Paris and beyond. He was on the Continent from 15 July to mid-October, travelling in some style, accompanied by a Durham country gentleman and amateur artist, Newbey Lowson, through France and Switzerland, but not quite reaching Italy.[1] Turner left Pars in July bound for Lyons, Grenoble, the Grande Chartreuse and Geneva. By 1802 Geneva had become established as a sort of basecamp from which to make the expedition to Mont Blanc. Turner and Lowson would have set out from Chamonix on foot on a grand tour of the mountain, making arrangements at Geneva for their Swiss guide to take their carriage to meet them at Martigny. Without the carriage there was nothing now to insulate Turner from the direct immersion in the spectacular and sublime landscape.

As David Hill has established the fifty miles from Geneva to Chamonix was at least two or three days’ journey.[2] The first leg to Bonneville would have been a full day on foot. When Percy Bysshe Shelley made the journey in 1816 he described Bonneville as ‘a neat little town, with no conspicuous peculiarity, except the white towers of the prison, an extensive building overlooking the town. At Bonneville the Alps commence, one of which, clothed by forests, rises almost immediately from the opposite bank of the Arve.’ Turner was captivated by the town and its setting. He immediately took three quick sketches of the bridge and valley in the ‘France, Savoy, Piedmont’ (TB LXIII) sketchbook, before taking out the large leather-bound ‘St Gothard and Mont Blanc’ (TB LXXV) sketchbook which he had brought with him from England. Apart from a sketch of the Isère valley from above La Frette it was still empty. Clearly he had been saving it for the main objects of the tour and it seems that at Bonneville, he felt he had arrived. Turner made two sketches of views approaching the town, which were to become some of the most productive of all his studies. As we shall see, these studies formed the basis of no fewer than three finished oil paintings, three finished watercolours and an illustration for the Liber Studiorum.

On the return journey he spent some three weeks in Paris, during which he filled the small 'Studies in the Louvre' sketchbook with numerous heavily annotated copies after Titian, Poussin, Rubens, and others. On this journey he used eleven sketchbooks in all, some of them quite large, with a total of over 400 drawings, forming a major resource which would fuel both Turner’s creativity back in London. The Royal Academy exhibition of 1803, for which Turner was on the hanging committee for the first time, presented the new academician at full strength with five oil paintings and two watercolours, all derived from the experiences of his 1802 tour. Four of the paintings reflected the powerful impact of his study of Poussin, Claude, and Titian in the Louvre. Two of the oils developed sketches made near Bonneville, including Bonneville, Savoy with Mont Blanc now in the Dallas Museum of Art and the Chateaux de St. Michael, Bonneville, Savoy now at the Yale Center for British Art. In May, the diarist Joseph Farington recorded many varied comments among fellow artists about Turner and his work; on 13 May he himself summed up Turner as 'confident, presumptuous,—with talent.'[3] 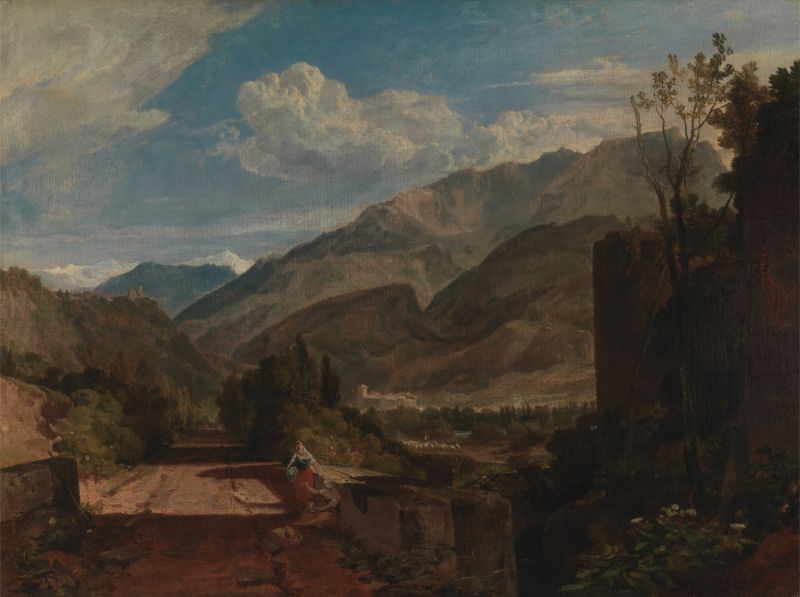 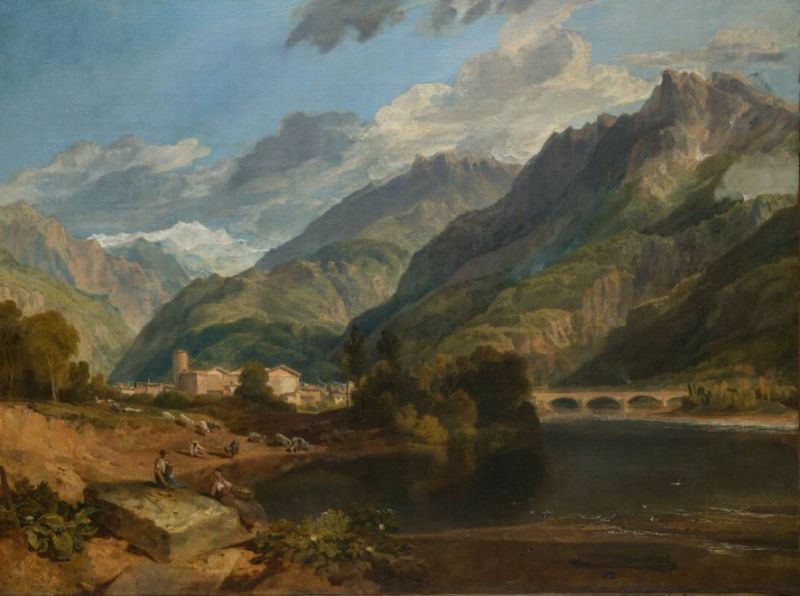 The present oil is a more intimate scale than his exhibition works and consequently preserves the intensity of a work made en plein air. It is derived from a watercolour Turner made in the 'St Gothard and Mont Blanc' sketchbook (TB LXXV), which, along with eight other sheets, was later removed, probably by Ruskin, who particularly admired this series. The watercolour is now in the Lloyd Collection at the British Museum.[4] Turner placed the chateau of St Michael at the centre of the composition, crowning the skyline and interrupting the view of the Mont Blanc massif, touched in with white gouache, with the famous peak itself to the left. In the oil Turner developed features of the original watercolour sketch, framing the distinctive profile of the castle against a view of the distant alps. In the oil, Turner explores all the atmospheric potential of the watercolour, showing a summer scene filled with light: the sky is animated by scudding clouds and the distant peaks of the Alps dissolve into the sky itself. The carefully structured composition shows Turner’s evident fascination with the works of Claude and Gaspard Dughet. A large herd of sheep spill down into the river Arve in the foreground of the composition, which is in shadow, two figures are shown seated on the bank to the left, shown in full sun, whilst the tree on the left is a careful transposition of the life-study in the ‘St Gothard and Mont Blanc’ sketchbook page. 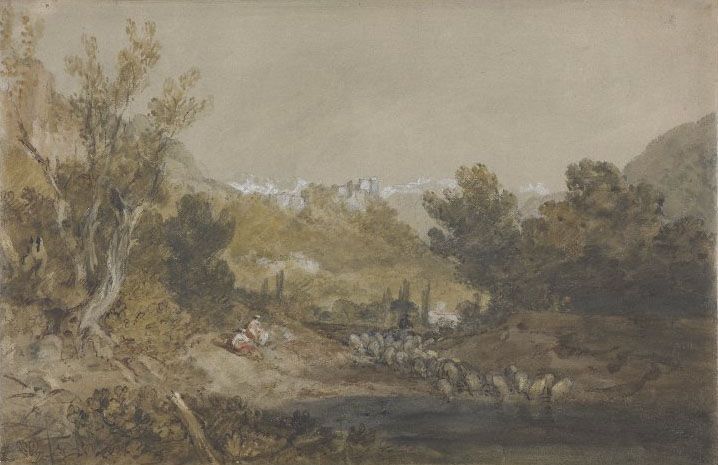 In the oil the castle extending along the crest of the ridge is handled with much greater definition than in the sketch, as are the two groups of subsidiary buildings lower down the hill. The flock of sheep in the foreground provides an important counterpoint to this distant drama of the mountains; it is evidently integral to Turner's conception of the place, in helping create the maximum sense of contrast between a familiar rural scene and the unique spectacle of the distant mountains. In the plate of Bonneville he prepared for the Liber Studiorum, although he chose a different view, Turner at one stage intended the subject to belong to the category of 'Epic Pastoral', though he subsequently reclassified it as 'Mountainous.’[5]

The present painting was commissioned by the Yorkshire landowner Walter Fawkes in around 1804.[6] As Shelley identified, Bonneville was the point on the southern route at which the traveller first views Mont Blanc and this may explain its popularity, not just with Turner, but with patrons. Fawkes almost certainly visited Turner’s gallery which opened for the first time two weeks before the Royal Academy exhibition in April 1804. Fawkes commissioned three large Alpine watercolours, two of which Turner completed the same year: The Passage of Mount St Gothard, taken from the centre of the Teufels Broch, Switzerland, now at Abbot Hall Art Gallery, Kendal and Fall of the Reichebach now at The Higgins, Bedford.[7] In all, Fawkes ordered some thirty Alpine views from Turner’s 1802 sketchbooks. It seems likely that Fawkes commissioned the view of Bonneville in around 1804, it was the first of a sequence of six oils by Turner that Fawkes acquired for the drawing room of his house, Farnley Hall in Yorkshire. The present painting is shown hanging in the drawing room in a study made by Turner in around 1818, hanging on the wall adjacent to the great Dort Packet-Boat from Rotterdam Becalmed now at the Yale Center for British Art. 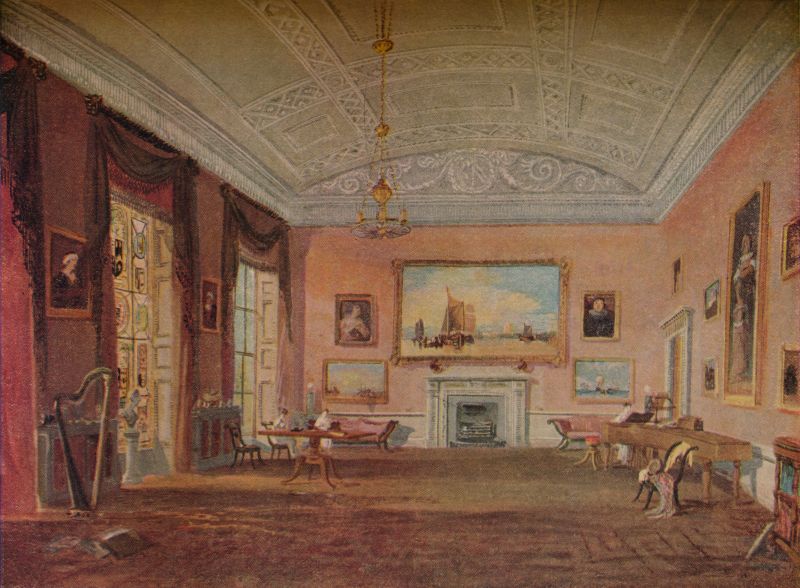 When in Fawkes’s collection, the title of the painting became confused. Fawkes listed the painting as simply ‘A Landscape’ and Walter Thornbury identified it as a view in the Appenines, it was Butlin and Joll who first correctly identified the subject-matter.  When in the collection of Walter Fawkes, the painting was enthusiastically described in The Athenaeum:

‘We have now arrived at Turner’s oil paintings which adorn Mrs Fawkes’s drawing-room at Farnley. No private apartment in England is so rich in Turners; with the exception which dated 1827, its ornaments are of the great master’s best time, and acquired by Mr. Walter Fawkes from the artist before the friendship between them was interrupted by his death. We shall describe the pictures in their order on the walls… If Mr Ruskin will permit us to suppose that Turner had been impressed by Gaspar Poussin – and we can hardly doubt that the elder master’s pathos and sentiment must have struck the younger on not a few occasions – then the dignified and solemn romance called ‘In the Appenines’ may have owed a little of its poetry to Poussin. It refers to the very land of Gaspar, and treats that country in the old master’s peculiar fashion, with, there cannot be a doubt, a far more searching, learned, and reverent feeling than had prevailed before the time of the painter, and with more knowledge than has been employed since then in combination with so grave and beautiful a sentiment. It shows a shallow valley, with a pool in front, towards which a flock of sheep are being driven. In the middle distance a castle stands on a rock; the scene is full of verdurous masses of trees. Every element has been made to subserve a poetical impression, and in the very disposing of the lines of the composition are to be seen dignity, repose, and beauty. This picture is named ‘Landscape’ in Mr. F. H. Fawkes’s list, and this lack of a definite title induces us to consider it as a ‘composition.’ It may even have been made by Turner to illustrate his own notions of his power to use, and to exalt in use, the very materials affected by Gaspar Poussin.’[8] 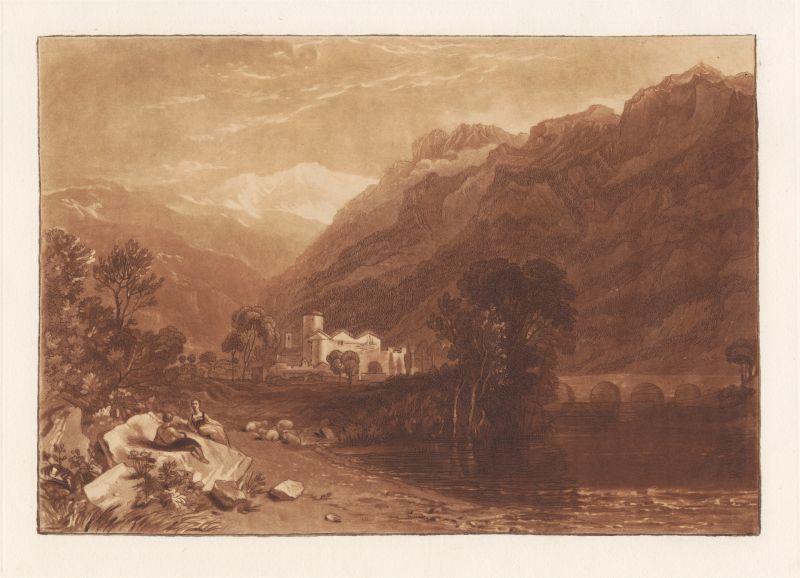