This monumental watercolour was one of a pair exhibited at the Royal Academy in 1791 depicting the Bayswater Turnpike at different times of the day and from different directions. A tour de force of Sandby’s topographical art, the work includes a panoramic view looking west along the top of Hyde Park towards Bayswater, then a burgeoning suburb in west London.

A late exhibition watercolour, Evening – view near Bayswater, along with its pendant, Morning – view on the road near Bayswater Turnpike now in the Victoria and Albert Museum, represent the culmination of Sandby’s career as a landscape painter; the complex, multi-figured compositions combine the specificity of a known London scene, with the picturesque incident and anecdote of a genre painting. It was precisely this combination which appealed to contemporaries. Preserved in remarkable condition, in contrast to Morning which has faded considerably and discoloured, Evening – view near Bayswater is one of Sandby’s great masterpieces. 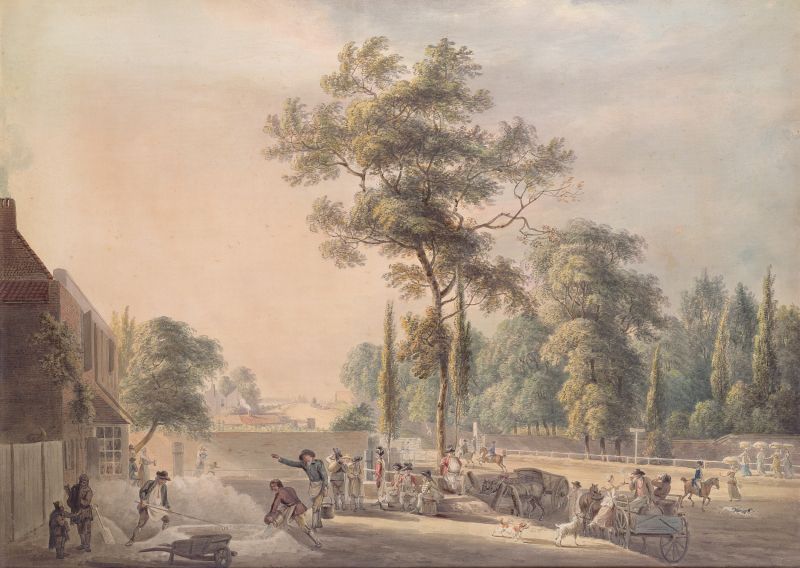 Sandby is a central figure in the emergence of landscape painting in Britain during the eighteenth century. Trained initially as a military draughtsman and involved in the Survey of Scotland, the project charged with making maps of the highlands, as part of the campaign to restore peace in the area after the rising of 1745, Sandby rapidly rose to become a fashionable and successful artist. By 1764 Thomas Gainsborough could write to one of his clients, declining to paint ‘real views from Nature in this Country’, but instead praising Paul Sandby as ‘the only Man of Genius… who has employ’d his Pencil that way.’[1] Sandby had sufficiently distanced his art from its practical origins and emerged as a leading figure in the London art world.

From 1760 Sandby contributed to the first public exhibition of British art becoming a regular exhibitor at the Society of Artists of Great Britain. Sandby was heavily involved in the life and politics of the Society of Artists eventually joining with a group of twenty other artists to lobby King George III for the foundation of a new art academy. As a consequence Sandby was made one of the founder members of the Royal Academy and accorded a seat on the Academy’s ruling council, underlining his position as the most prominent landscape watercolourist of his generation. Sandby understood the power of the new Academy and he regularly showed watercolours at the annual exhibition, making him a pioneer of the medium and especially so of the large-scale exhibition watercolour.

Sandby maintained both a flourishing career as a landscape painter and fashionable drawing master. It was during the 1760s that he produced some of the best of his great series of drawings of Windsor Castle and its surroundings.[2] An outstanding group of these, many formerly in the collection of Sir Joseph Banks, is in the Royal Collection at Windsor. In his Windsor compositions, many of them panoramic, Sandby combines delicacy of colour and meticulous detail to provide informative and telling records of the scenes he depicted.

In 1772 Sandby moved with his family out of the centre of London and into one of the rapidly developing western suburbs, taking a house at 4 George’s Row overlooking Hyde Park. Sandby’s studio, built at the end of his garden, had a north facing windows which looked over Hyde Park. The location provided the artist with a variety of subjects, with the flow of traffic around the turnpike gate making it a particularly favoured motif. Living in St George’s Row Sandby was, as John Bonehill and Stephen Daniels have observed: ‘well placed to observe the transformations in an emergent zone on the urban periphery, the so called ‘environs of London.’[3] Numerous accounts of Sandby’s life at St George’s Row exist and all stress his industriousness, socialness and pleasure in the location. Henry Angelo recorded calling to see Sandby and found him: ‘seated at his window, when nearly four-score years, with all the enthusiasm of a youthful artist, sketching some incidental effect of light and shadow from the opposite scene of Hyde Park.’[4]

The present, spectacular watercolour was the result of Sandby’s interest in the scenery he found on his doorstep. The viewpoint is looking west along the Bayswater Road, with the famous coaching inn, the Old Swan (which survives in recognizable form), on the right. Its pendant, entitled Morning – view on the road near Bayswater turnpike, shows the gateway of the turnpike from the forecourt of the Swan Inn itself. As Bonehill and Daniels have observed of this work: ‘the scenes are animated by scores of figures, including several maids, soldiers farmworkers, builders and laundresses, as well as many type of vehicles, from lumbering carts and wagons to speeding gigs and stage coaches, and a range of equestrians and pedestrians making their way to and from London. These scenes show Sandby’s longstanding interest in urban gateways as social arenas, as well as developing a popular genre of turnpike-gate subjects.’[5]

Numerous preparatory drawings for the two views survive, including several studies of the tree at the centre of the composition and various schematic views of the turnpike, contained in an album in the British Museum. The present work is related to a finished watercolour in the collection of the Castle Museum, Nottingham, although it is unclear whether this is preparatory or another iteration of the composition made after the exhibited work.[6] Sandby was noted by contemporaries for his habit of making sketches of individuals; many of these figural studies survive. In the foreground of the present scene Sandby introduced the figure of a small child in a baby carriage being pulled by her nursemaid, they are identifiable as the artist’s eldest grandchild, Augusta, with her nurse Sally Loman. The figures derive directly from a drawing of the same size now in a private collection, giving an idea of the composite method Sandby adopted in the preparation of his large scale exhibition works. The same group appear again in a later drawing of The Deputy Ranger’s House, Windsor, suggesting that Sandby retained an archive of figure studies which could be introduced into finished works.[7] Sandby has added a number of figures into both Morning and Evening, adding a narrative aspect to the compositions. Thus the military band seen seated in the forecourt of the Swan Inn in Morning, are seen returning along the Bayswater road in Evening, equally the mounted figure in the blue coat on the bay horse appears in both. 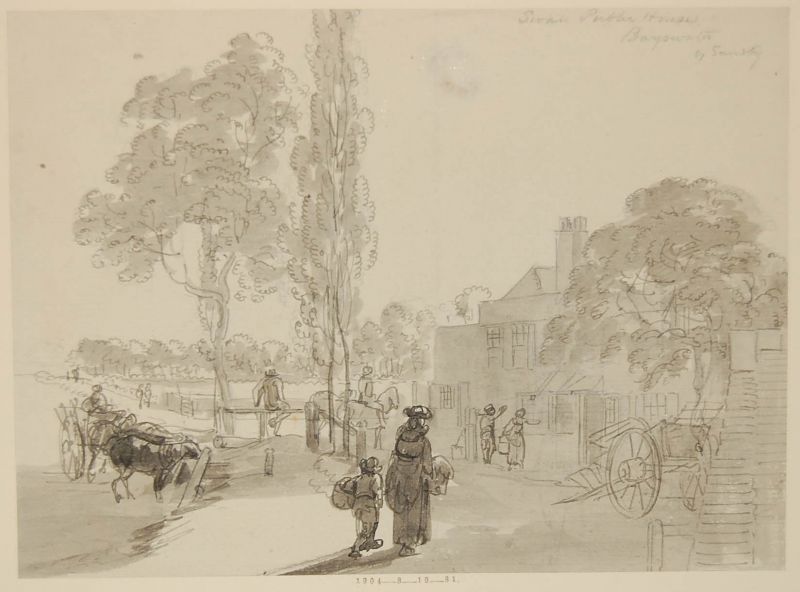 Evening teams with life. In the centre of the drawing two horses drink from a trough with a stationary hay cart in front of them. The road is busy with horsemen, pedestrians returning home as the sun begins to set.  The wall on the left surrounds the extensive gardens of Kensington Palace.  On the far right of the composition Sandby has introduced a beggar and his dog, whilst at the heart of the composition, an oyster seller is depicted weighing oysters carried in panniers on the back of his donkey, recalling Sandby’s London Cries which he had published in the 1760s.

Painted towards the end of Sandby’s career, Evening – view near Bayswater, along with its pendant, are two of the most ambitious and significant drawings he produced. The scale and ambition of the compositions underline Sandby’s importance as an early pioneer of watercolour as a medium. As the great scholar of Sandby, Luke Herrmann noted of Morning: ‘in this important drawing, the figures and other staffage elements show Paul Sandby’s draughtsmanship at its best, and even in its present dirty and faded condition the drawing demonstrates the artist’s mastery of composition based on the subtle rendering of effects of light and shade.’[8] The present work is equally masterful and impressive, but unlike the pendant described by Herrmann, survives in exemplary condition. These two works were almost the last great watercolours Sandby produced, his views of Bayswater can be seen as the culmination of his career in the medium and they deservedly stand as two of the most ambitious and complete watercolours of the eighteenth century.[9]