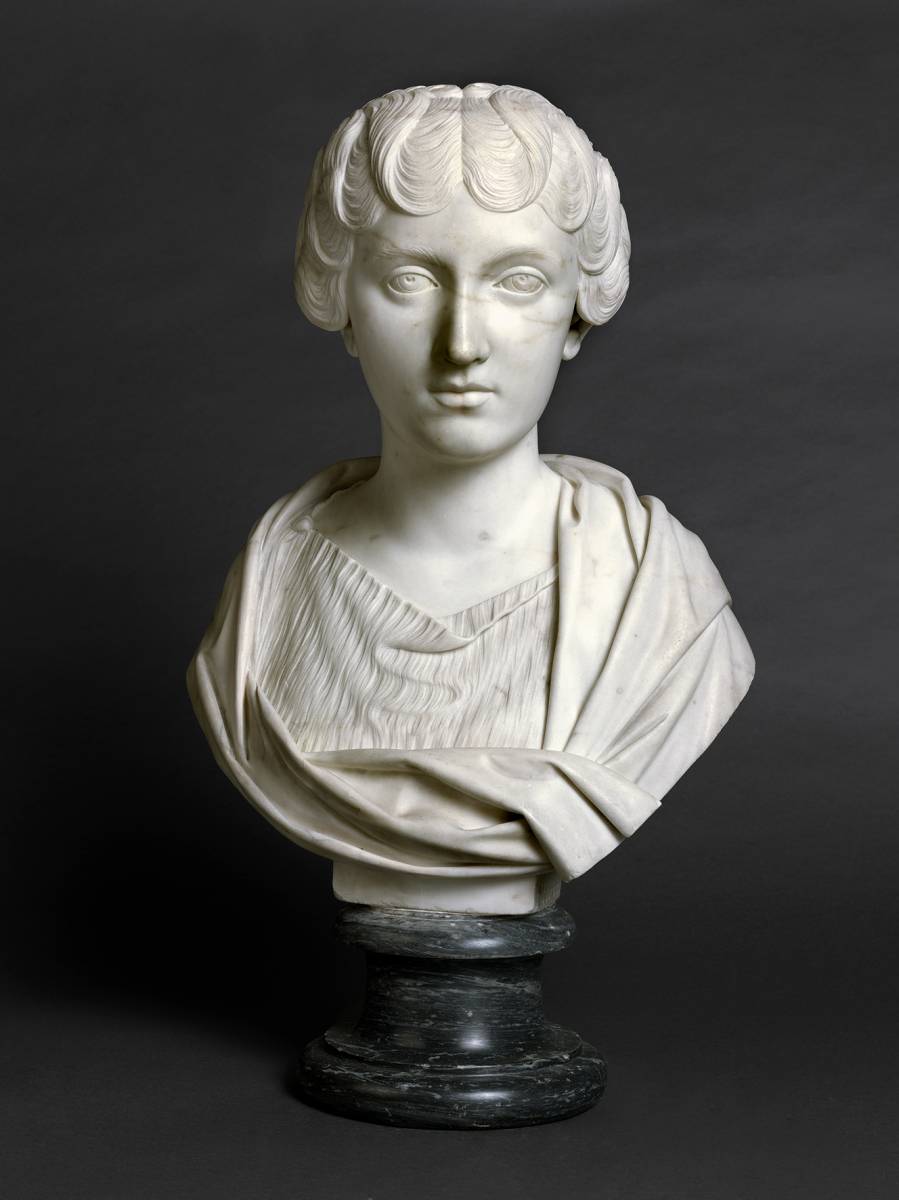 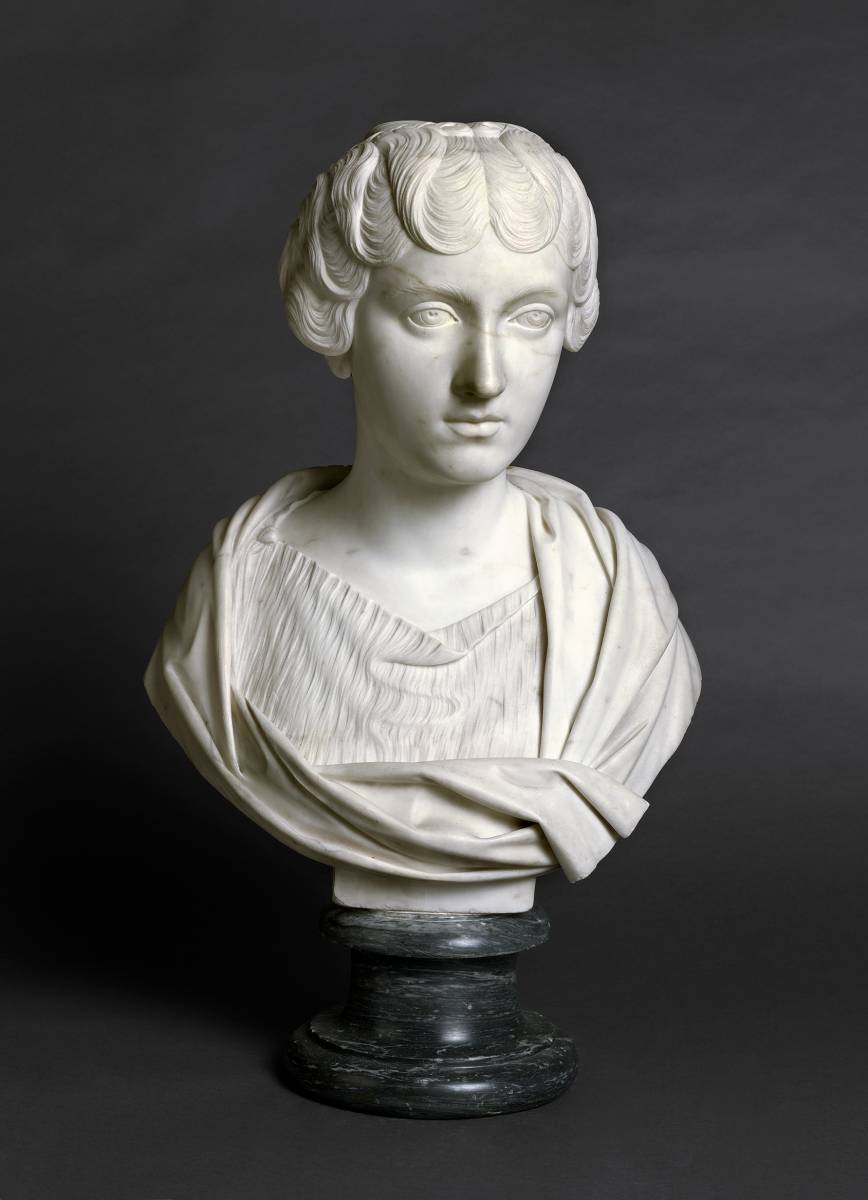 This marble copy of an ancient bust in the Musei Capitolini usually identified as Faustina the Younger, the daughter of Antoninus Pius and future wife of Marcus Aurelius, was made in Florence by Francis Harwood in 1764. Harwood was one of the most prolific suppliers of decorative marbles for the Grand Tour market and this finely worked example demonstrates the quality of luxury goods available to travellers to Italy. So often anonymous, this unusually signed and dated example, raises questions about the status of marble copies in the period and of sculptors such as Harwood who are known principally for ornamental work.

Harwood’s origins remain obscure. He is documented living in Palazzo Zuccari with Joshua Reynolds and the Irish sculptor Simon Vierpyl at Easter 1752, he had certainly settled permanently in Florence by the following year, when he is recorded working with Joseph Wilton. He was admitted to the Florentine Academy on 12 January 1755 (as pittore Inglese, although he was described as scultore in the matriculation account).[1] After Wilson returned to England in 1755 Harwood appears to have worked in a studio near SS. Annunziata with Giovanni Battista Piamontini who had made life-size copies of The Wrestlers and The Listening Slave for Joseph Leeson in 1754. In 1758 both sculptors were contracted to make a statue and a trophy to complete the decoration of the Porta San Gallo, Harwood completing a statue of Equality, installed the following year.[2]

By 1760 Harwood was on the brink of his most productive period as a sculptor, producing copies of celebrated antiquities for the ever-increasing audience of Grand Tour travellers and for the domestic market in London. In 1761 Harwood met the young architect James Adam who was in Italy specifically to make contact with suppliers for Robert Adam’s burgeoning practice back in Britain. The Adams offered a remarkably cohesive design package to their clients, encompassing not just architecture, but fixtures, fittings and furniture as well. Harwood was able to supply the brothers with marbles for their new interiors. At Syon, for example, Harwood produced a full-size copy of Michelangelo’s Bacchus for the new dining room the Adams had designed for Hugh Smythson, 1st Duke of Northumberland.

Harwood seems to have also specialised in producing sets of library busts. In 1758 Charles Compton, 7th Earl of Northampton, a distinguished traveller commissioned a set of busts which remain in situ at Castle Ashby in Northamptonshire. It is perhaps no coincidence that the Adam brothers were producing designs for new interiors at Castle Ashby at this date. The set included representations of: Cicero, Julius Caesar, Marcus Aurelius, Faustina the Younger, Sappho, Seneca and Homer. Each of these busts Harwood seems to have replicated for multiple patrons, another Adam patron, Thomas Dundas, for example, who was in Florence in 1762 commissioned busts of Marcus Aurelius, Faustina the Younger, Seneca and a Vestal paying 50 zecchini each for the busts in 1767.[3] The present, beautifully modelled and exceptionally well-preserved example was almost certainly commissioned by a British traveller, it belongs to a very small number of Harwood’s busts which are both signed and dated. 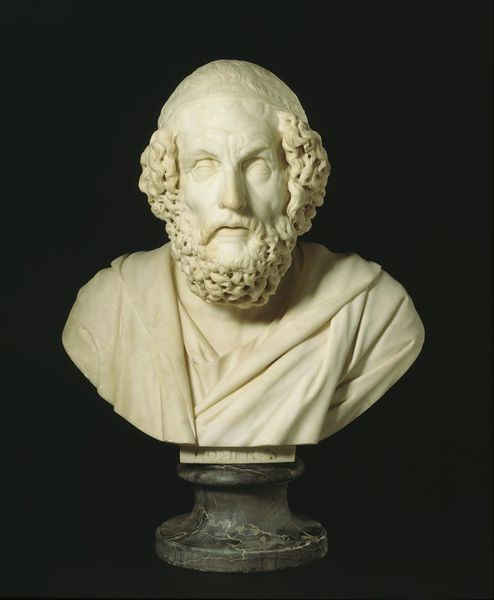 Busts of Faustina the Younger were remarkably popular in the mid-eighteenth century. The Roman bust had been discovered at Tivoli in 1748 and presented by Benedict XIV to the Capitoline Museum. It had been restored by Bartolomeo Cavaceppi, who went on to produce a series of marble copies, including a version for James Adam in 1762 which he sold to the Duke of Northumberland and which is now at the Philadelphia Museum of Art. Further copies were made for Gustav III of Sweden, for Henry Temple, 2nd Earl of Palmerston and Henry Blundell.[4] Accounting for its popularity is less easy. Faustina the Younger was not a major historical figure, her biography was not sufficiently engaging to justify her presence in so many distinguished sculptural collections. The answer may well lie in the bust’s appearance; the oval shape of the face, its mild expression, bisque texture and linearity were all characteristics of Hadrianic sculpture much admired by such leading tastemakers as Cardinal Alessandro Albani and Johann Joachim Winckelmann. These were also characteristics common to nascent neo-classicism.

In the present crisply modelled sculpture, Harwood has placed the white bust on a grey marble socle a feature common to a pair of busts depicting Homer and Senecca also signed and dated by Harwood to 1764 and preserved in the collection of the Victoria and Albert Museum, London. They had been commissioned in Florence by Alexander Gordon, 4th Duke of Gordon in 1763 and remained at Gordon Castle, Banffshire until the middle of the twentieth century. The present bust may well have formed part of the same commission. The first volume of John Preston Neale, Views of the seats of noblemen and gentlemen appeared in 1822 and contained a description of Gordon Castle listing in the hall a: ‘copy of the Apollo Belvedere, and Venus de Medicis, beautifully executed of statuary marble by Harwood. Here also, by the same ingenious statuary, are busts of Homer, Caracalla, M. Aurelius, Faustina, and a Vestal… each raised on a handsome pedestal of Sienna marble.’[5] Given that this bust is dated 1764, the same year as the other Gordon Castle busts it seems likely that it was this bust that formed part of the Duke of Gordon’s commission. Gordon was depicted in a spectacular full-length portrait by Pompeo Batoni now in the collection of the National Galleries of Scotland, he accompanied the 7th Earl of Northampton on his entrance to Venice as British ambassador extraordinary to Venice in May 1763, but seems otherwise to have been unmoved by Italy, apparently: ‘he showed scarcely a trace of animation as he sat in his carriage, while Winckelmann described to him, with the choicest expressions and grandest illustrations, the beauties of the ancient works of art.’[6] 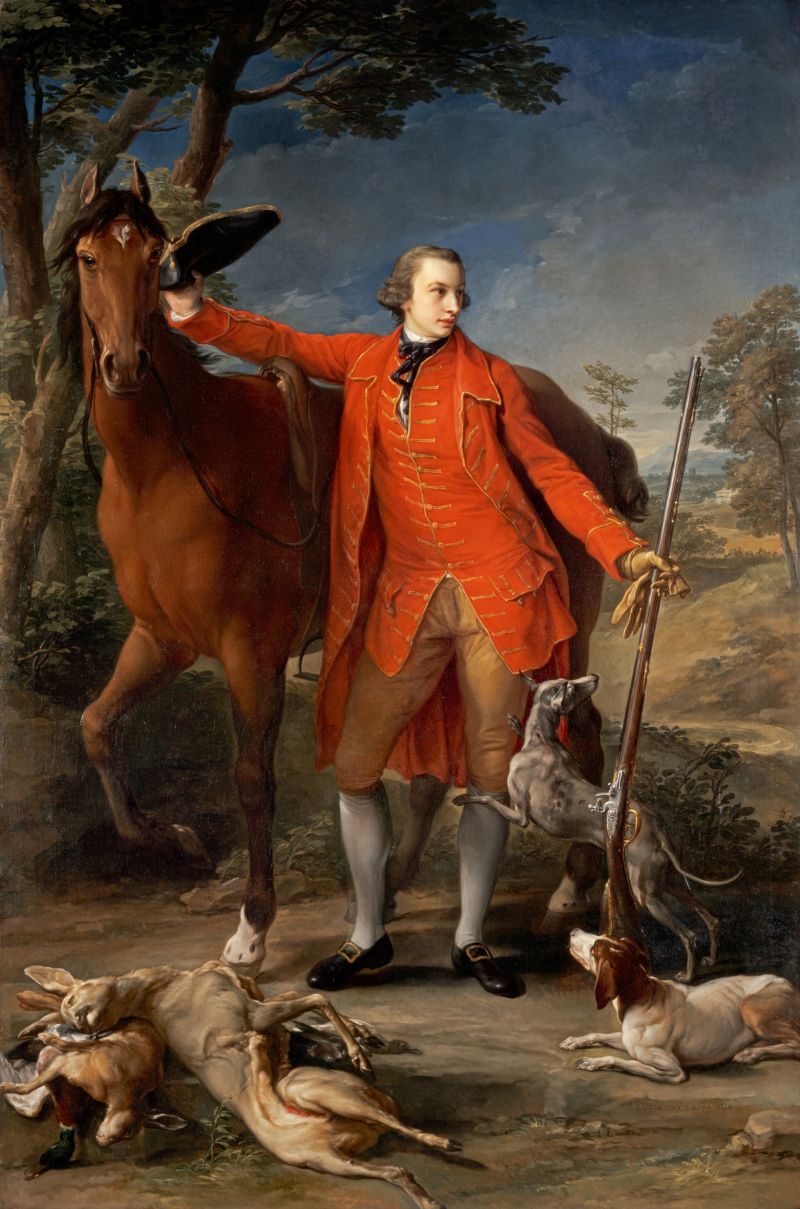 Linking this bust to the Duke of Gordon, places this kind of Grand Tour purchase in specific context, but it does not alter the more general purpose of such cultural production as a signifier of taste.