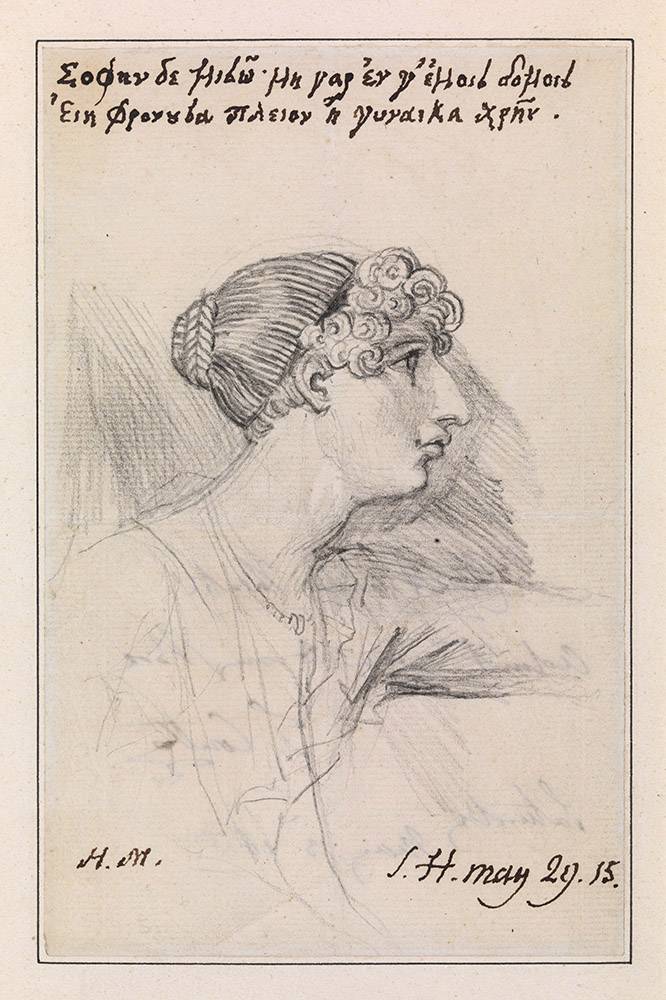 This highly worked, intelligent and incisive portrait was made by Henry Fuseli in his rooms at the Royal Academy in Somerset House.

The subject was the celebrated actress, Harriot Mellon, who had recently married Fuseli’s great friend and patron, the banker, Thomas Coutts. Coutts had sponsored Fuseli’s trip to Rome in 1770 and remained a life-long support of the artist and his work. This powerful, carefully observed profile portrait is a testament to the intimacy between Fuseli and Coutts.

The daughter of itinerant actors, Mellon, famous for her beauty, made her debut in London at the Drury Lane Theatre as Lydia Languish in Sheridan's The Rivals in 1795. Anne Matthews, a fellow actress described her as: ‘a young, glowing beauty, endued with great natural powers of mind, talents and vivacity, but ... an insuperable rusticity of air and manners.’ Mellon retired from the stage in February 1815, shortly after her marriage to Coutts, he was seventy-eight, forty years older than Mellon.

Fuseli produced a number of intense studies of women throughout his career. Frequently fantastical and eroticized, these drawings often show women at their toilet, dressing their hair or in a state of undress. This intensely worked sheet preserves something of Fuseli’s interest in women’s hair. Her hair is worked with a graphic intensity which recalls both Etruscan vase painting and the spare line engravings of John Flaxman. The drawing is inscribed with the date and location ‘S.H.’ referring to Somerset House, the home of the Royal Academy, where Fuseli had a studio in his capacity as Keeper of the Royal Academy Schools. In a characteristic mode, Fuseli has also inscribed the drawing with two lines of Greek. The quotation comes from Euripides’s Hippolytus and translates as: ‘But a clever woman - that I loathe! May there never be in my house a woman with more intelligence than befits a woman!’ The ambiguity of this sentiment is entirely typical of Fuseli’s deployment of text within his images, but it may also point to a dissatisfaction at seeing his oldest friend and patron marry an actress in old age?