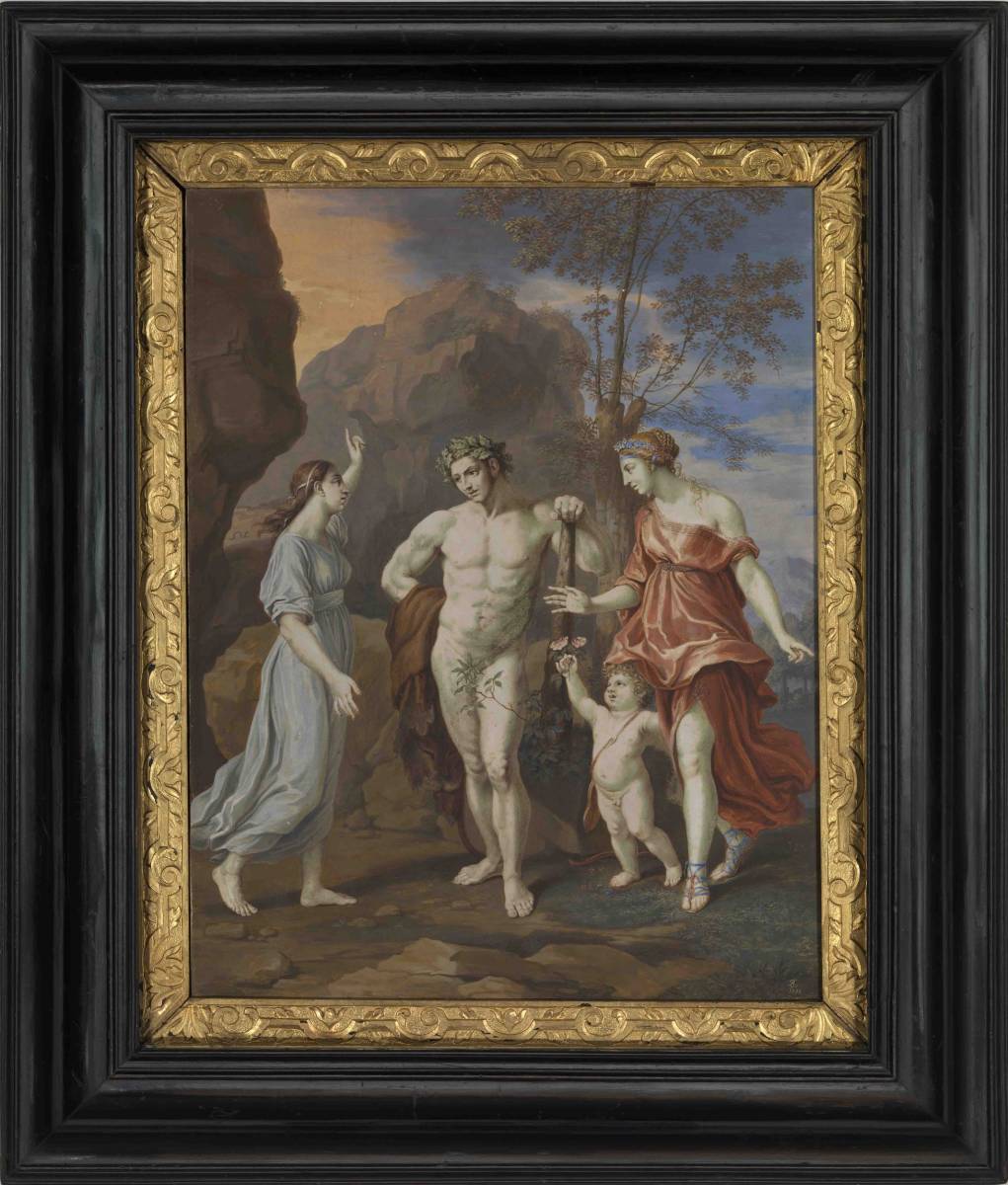 This masterpiece of limning was made by Bernard Lens III in 1719 after a celebrated painting by Poussin, then in the collection of the great collector James Brydges, 1st Duke of Chandos. Executed in gouache on vellum and housed in its original ‘Lens’ frame, this work points to Lens’s fascination with the heritage of miniature painting in Britain and to the enduring appeal of finely worked miniaturised copies of celebrated old masters for British collectors. Like all of Lens’s surviving copies, this work is recorded in the auction of Lens’s collection held by Christopher Cock in Covent Garden in 1737.[1]

Bernard Lens came from a distinguished family of artists. His father, also Bernard, had been a successful engraver, who worked particularly in mezzotint and his grandfather was recorded by Vertue variously as a ‘Dutch preacher’ and painter. Lens was a highly skilled miniaturist who pioneered the use of ivory as a support in Britain. He was at the heart of the London art world, Vertue listed him as one of the original subscribers to Kneller’s Academy and he achieved considerable reputation as a miniaturist holding Royal Appointments in this capacity under both George I and George II.

Lens was aware of the heritage of limning in Britain, consciously fashioning himself as the heir to Nicholas Hilliard and particularly the great seventeenth-century miniaturist, Samuel Cooper. From 1712 he worked for John Hervey, 1st Earl of Bristol producing a series of copies of portraits of famous painters, completing in 1718 heads of Rubens and Raphael.[2] These were joined by a series of portraits of great ‘British’ painters: John Greenhill, Van Dyck, William Dobson and Samuel Cooper, the latter inscribed by Lens ‘famous performer in minature he having far exceeded all that went before him in England in that way and even equell the most famous Italians insomuch that he was call’d ye Van Dyck in little.’[3] He also advised collectors on the care of their collections. Notably he worked for Edward Harley, 2nd Earl of Oxford. The simple stained black pear-wood frames he produced to house pieces from the earl's collection are still known today as 'Lens frames'.

But it was in his production of ambitious, highly finished copies after celebrated old masters that Lens showed his commitment to the traditions of seventeenth-century miniaturists. Lens’s copies of old master paintings made on vellum, continued a respected tradition begun by Peter Oliver, who had made copies for Charles I of paintings in the king's collection. Horace Walpole noted of Lens: ‘his excellence was copying works of great masters, particularly Rubens and Vandyck, whose colouring he imitated exactly.’[4] The evidence of the sale of his collection by Christopher Cock in 1737 shows that he copied paintings from notable collections including the Duke of Marlborough, Sir Robert Walpole and Dr Mead, as well as pictures belonging to friends and neighbours.[5] The fact that the present work is recorded in his 1737 sale, suggests that Lens made the copy for his own collection. Vertue observed that Lens’s pupil, Catherina da Costa: ‘learned to limne of Bernard Lens for many years. She having begun about 1712 continued to 1730 - in time she Coppyd many pictures & limnings mostly all the remarkable of Faime in England painted by Rubens Vandyck & other masters, which Mr Lens her instructor had coppyd.’[6]

Hercules between Vice and Virtue is one of the largest and most impressive of Lens’s copies to survive. It demonstrates Lens’s ability to successfully communicate Poussin’s style in miniature. As Kim Sloan has pointed out, Lens: ‘used a miniature technique for these small copies on vellum, each highlight or leaf a dot of pure colour on the surface of broader areas of colour carefully built up with layers of tiny strokes of the brush over laid-in grounds.’[7] Preserved in exceptional condition, this is one of the most impressive miniature copies of old masters to survive from the early eighteenth century and points to an important element of British engagement with European old masters.