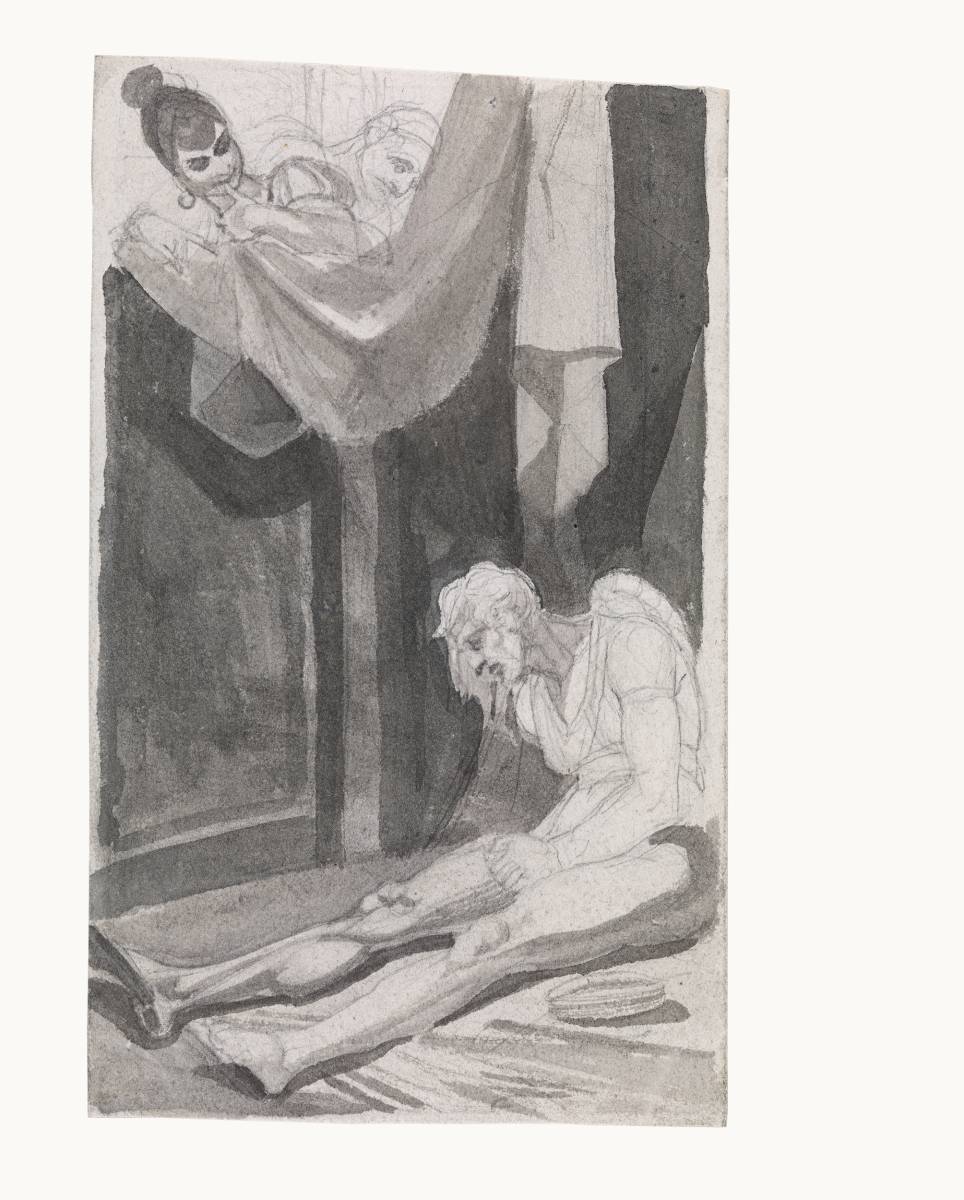 This small, richly worked study seems to have been made by Henry Fuseli in preparation for George Steevens' 1805 edition of the plays of William Shakespeare. The scene from Act IV Scene II of Twelfth Night shows Maria and Feste looking down on their prisoner, the despairing Malvolio, following his misguided attempt to court Olivia. Feste, the jester, is disguised as a priest. In the finished print, Fuseli changed the emphasis of the action, transforming Malvolio's despair to imploring, showing him arms outstretched towards Maria and a triumphant Feste. This potent, beautifully preserved drawing shows Fuseli's ability to concentrate a complex narrative into a confined sheet.

Fuseli was born in Zurich, the son of a portrait painter, but received his artistic training and significant early patronage in London where he settled in 1765. Highly educated and with a remarkable breadth of reference, Fuseli made a splash in London publishing an English translation of Winckelmann’s Reflections on the Painting and Sculpture of the Greeks, which was followed in 1767 by his long essay Remarks on the Writings and Conduct of J. J. Rousseau. At the urging of Reynolds, Fuseli travelled to Rome in 1770 to study. In Italy Fuseli was profoundly influenced by his experience of the antique, of Michelangelo and his followers, in particular Baccio Bandinelli. As a result, Fuseli developed a visual vocabulary of heroic muscle-bound figures, much indebted to the swollen anatomy found in late antique sculpture and reimagined in mannerist art. In his Roman designs, Fuseli deployed these grand figures in narratives requiring violent action, drawn from a dizzyingly erudite range of sources. Shakespeare particularly fuelled Fuseli’s imagination and in an album of drawings Fuseli made in Rome he produced a series of designs for a set of frescos conceived along the lines of the Sistine Chapel but devoted to the plays of Shakespeare; it was a remarkable reworking of Michelangelo’s scheme, celebrating British literature in place of the Bible. The sculptor Thomas Banks writes in 1773 that: ‘amongst the students in painting, Fuseli cuts the greatest figure; last season he had pictures bespoke to the amount of 1,300 L. good encouragement for a student yet nothing more than, from his great abilities he is justly entitled to.’

Fuseli returned to London in 1779, travelling via Zurich. Back in Britain he established himself as a leading historical painter, exhibiting regularly at the Royal Academy. In 1786 John Boydell commissioned nine works from him for the Shakespeare Gallery. Fuseli’s tireless work as a historical painter ensured that by 1799, when James Barry was expelled from the Royal Academy, Fuseli was elected professor of painting in his stead and it was in this role and from 1805 as Keeper of the Academy, that Fuseli exercised such an influence over the succeeding generations of British artists. 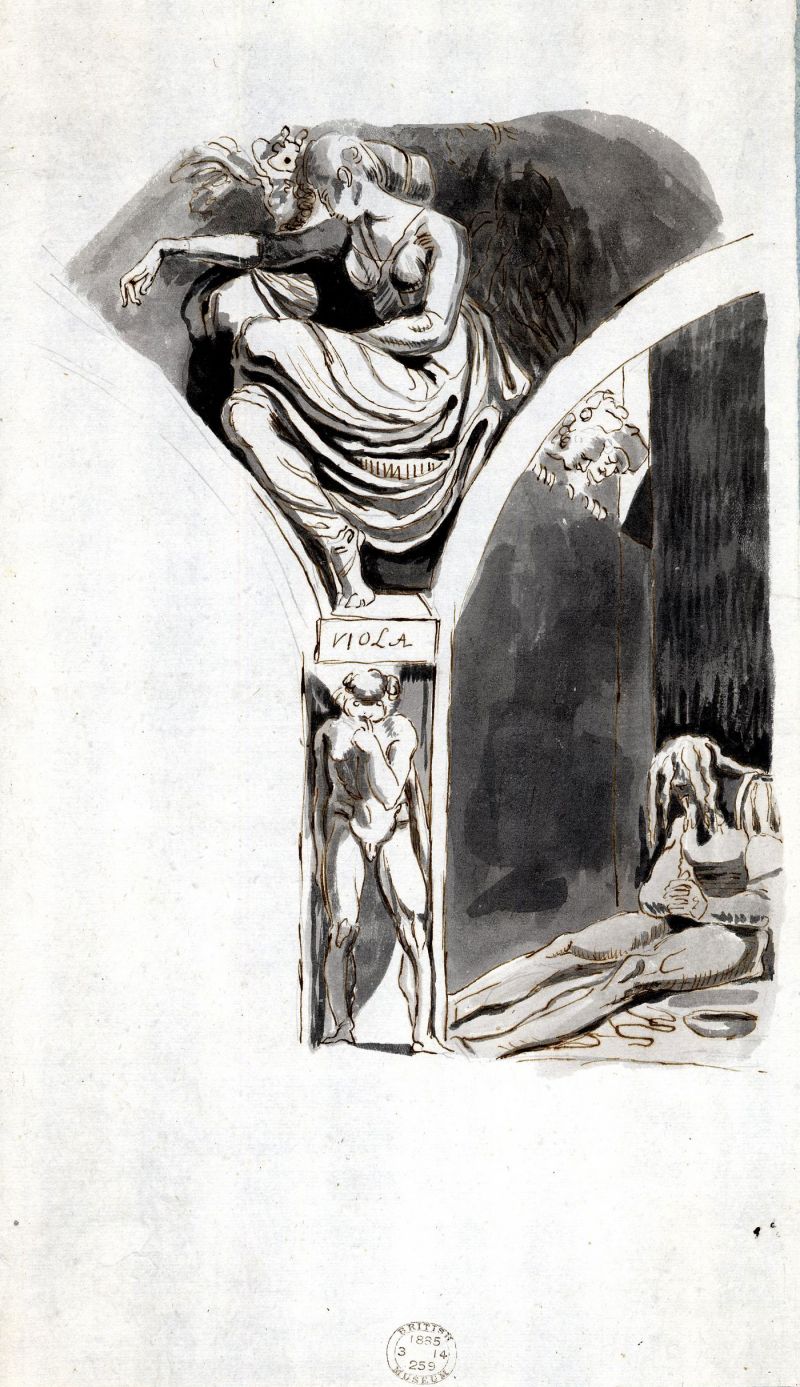 This characteristic drawing worked in pencil, ink and wash shows the way Fuseli’s pioneering work in Rome fed his London career. A variation on this design first appears in Fuseli’s Roman Album, now in the British Museum. In one of the spandrels and lunettes dedicated to the plays of Shakespeare. In the Roman Album Fuseli shows the monumental figure of Viola, loosely based on one of the sibyls from the Sistine Chapel, with Maria and Feste taunting the incarcerated Malvolio in the lunette. Fuseli retains the same composition in the current study, refining the elements slightly and showing Maria with characteristically Fuselian hair and Feste dressed as a priest. Dating this drawing is rather difficult, but it seems likely that Fuseli returned to the subject following his commission to illustrate George Steevens’ 1805 edition of Shakespeare’s plays. Like Fusel’s Roman Album, this drawing is first recorded as belonging to his friend and pupil Harriet Jane Moore, who owned some of Fuseli's most significant works. This drawing remained in an album of drawings, all previously unknown to Fuseli scholars, until its sale by Moore’s descendants in 1992. 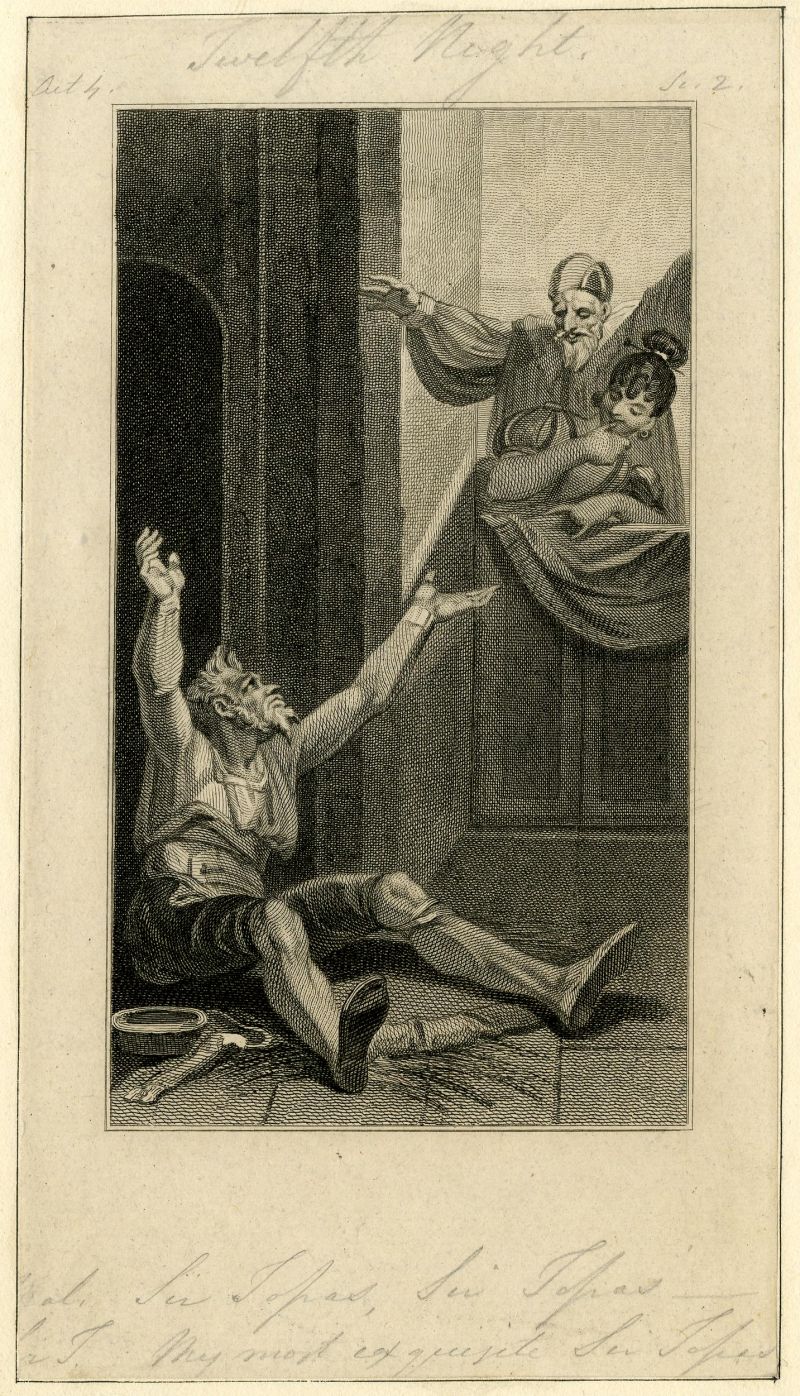