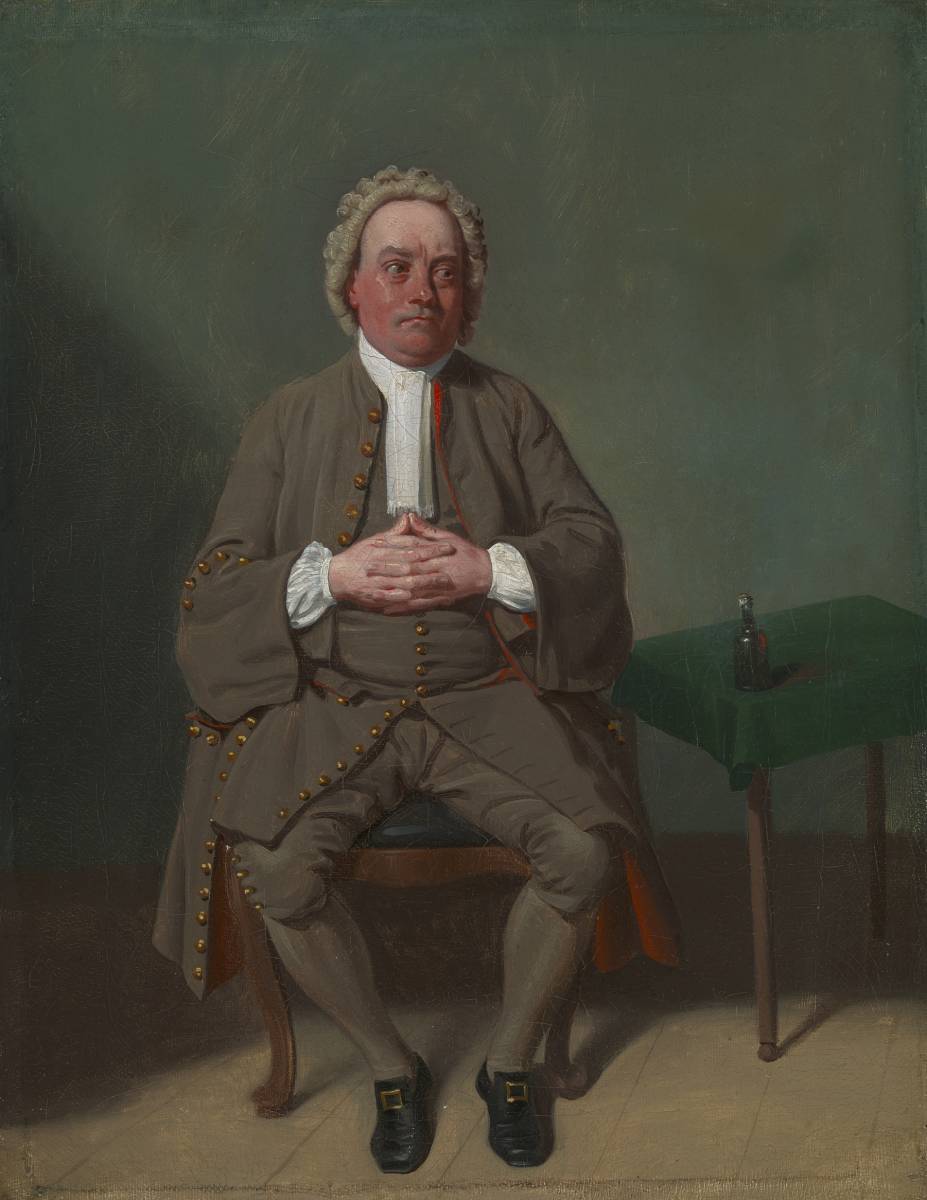 This vivaciously executed portrait by Samuel de Wilde belongs to an important sequence he made of British actors depicted in their most famous theatrical roles, a genre that represented an important form of British art in the second half of the eighteenth century. John Quick was one of the most celebrated comic actors of his generation and is shown by de Wilde in the role of Vellum, the steward of Sir George Truman, from Joseph Addison’s popular comedy, The Drummer.

De Wilde's career in theatrical portraiture began with the publication by John Bell of the second issue of the British Theatre in January 1791. Each number of the British Theatre consisted of a play accompanied by a vignette and a full-length portrait of a leading actor or actress of the day as one of the characters. Bell chose De Wilde as the portraitist and puffed him in his newspaper, The Oracle, on 8 April 1791 with the statement: 'Zoffany has hitherto been considered as the most celebrated Painter of small whole lengths, but comparison now gives DE WILDE a place as his superior.'[1] He provided his protégé with a studio in the ‘British Library’, his bookshop on the Strand, and invited potential subscribers to visit the artist at work. De Wilde was extremely productive, painting no fewer than thirty-six character portraits in 1791 and thirty-three in 1792. The portraits show actors  in costume with props, set against a theatrical backdrop. De Wilde’s portrait of John Quick as Vellum is a particularly fine example, showing him seated, hands clasped across his middle, his wig pushed back on his head. The engraved plate is accompanied by the line: ‘Mrs Abigail – I have a Triflle about me which I would make a present of.’ This is a scene that comes in the third act, when Vellum tries to woo Abigail with the gift of a silver thimble. De Wilde apparently captured Quick’s trademark pose: he is shown with his wig similarly askew in Zoffany’s theatrical depiction of A Scene from Speculation painted in 1796 and now in the Garrick Club, London.

Quick, says William Hazlitt, made 'an excellent, self-important, busy, strutting, money-getting citizen; or crusty old guardian, in a brown suit and a bob wig.’[2] He was widely praised for his performances as old men: '[t]here was a peculiarity in his voice which rendered his old characters exceedingly whimsical.’[3] His squat figure seemed perfect for many of the parts he played: 'The person of Mr Quick', wrote Gilliland, 'is happily formed for a comedian; with features beaming with good humour, he has eyes particularly expressive of mirth, and a facetiousness of disposition.’[4] De Wilde portrayed Quick twice in 1791 as Tony Lumpkin in Oliver Goldsmith’s She Stoops to Conquer and as Don Lewis in Colley Cibber’s Love makes a Man. In 1796 De Wilde depicted Quick as Tony Allspice in Morton’s The Way to get Married, a painting now in the Yale Center for British Art and finally in 1805 as Old Doiley in Cowley’s Who’s the Dupe.

Preserved in exceptional condition, this portrait executed in de Wilde’s characteristic small format  demonstrates his ability to capture the character of his theatrical sitters.  It is also a rare example of de Wilde’s work outside an institutional collection and offers an important example of British theatrical portraiture in the eighteenth century.