The Porte Saint-Denis a triumphal arch inspired by the Arch of Titus in Rome was designed by architect François Blondel and the sculptor Michel Anguier for Louis XIV to celebrate his victories on the Rhine and in Franche-Comté. Built in 1672 and paid for by the city of Paris, it replaced a medieval gate in the city walls built by Charles V in the 14th century. Symbolically marking the entrance into 17th-century Paris at the site of the old toll-gate, the Porte St Denis is the second-largest triumphal arch in Paris.

This Parisian monument was a notable Parisian sight at the time of Cox’s visit and had formed the subject of one of Thomas Girtin’s ‘Selection of Twenty of the Most Picturesque Views in Paris, and Its Environs’ (1803).  In Girtin’s print the arch, partially obscured by the surrounding buildings, is incorporated into a bustling street scene.  Cox indicates similar street activity, but he presents a closer, unobstructed view of the arch. 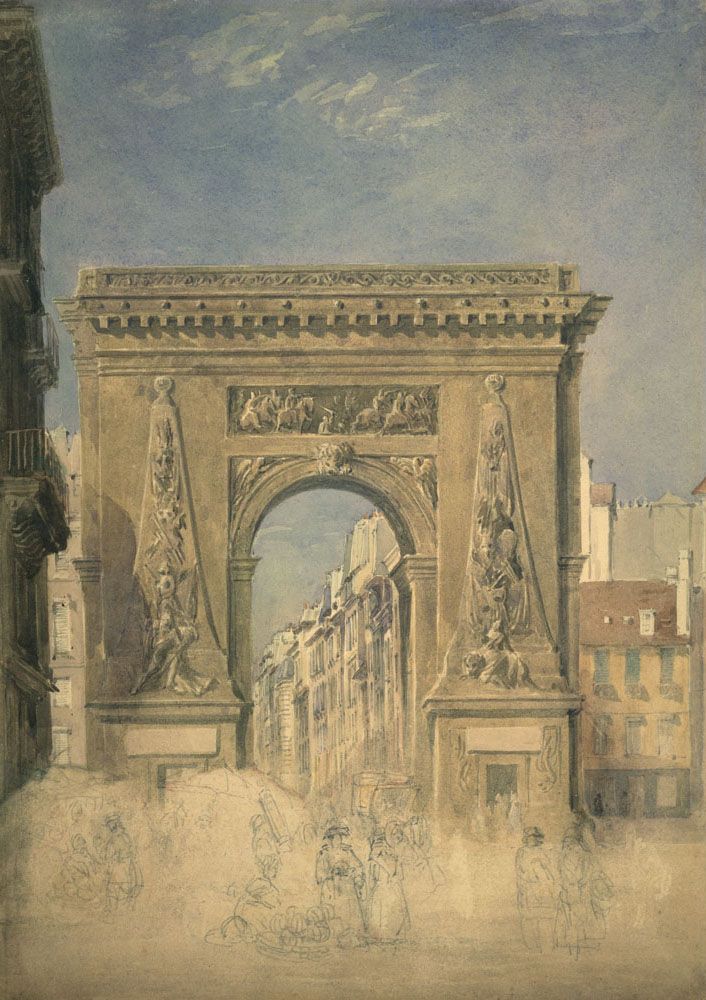 Cox made only one visit to Paris in 1829.  Plans to travel further afield were thwarted by an unfortunate fall on the second day, resulting in a sprained ankle.  He subsequently spent six weeks sketching the streets of the city from various hired carriages.  Cox’s Parisian sketches which have come to be among the most highly regarded of his watercolours, were never exhibited during Cox’s lifetime and only known to a small group of family and friends.  Wilcox has noted that: among his Parisian subjects, Cox’s view of the Porte St Denis is unusual in that it exists in at least two versions.  While the present work with its forceful pencil drawing and bold use of watercolour is typical of the works Cox produced during his weeks sketching in the streets of Paris, the other version (private collection; illustrated Bauer, 2000, p. 147) with its more controlled pencil outlines and application of watercolour seems less a sketch than a piece intended for exhibition and/or sale but left unfinished.  It is closer in handling to the ‘Pavillon de Flore, Tuileries, Paris’ at Leeds City Art Gallery, which may be one of the works Cox exhibited in 1830.  (Wilcox, op. cit., p. 176).