'Durno some time since exhibited his large picture of Priam returning to Troy with the body of Hector, we think it the best thing he has done.’

This impressive painting is the most ambitious historical canvas made by the British artist James Durno in Rome, commissioned by perhaps the most lavish Grand Tour patron of the eighteenth century, Frederick Hervey, Bishop of Derry and 4th Earl of Bristol. As such, Priam Returning to Troy with the Body of Hector offers important evidence of an artist tackling an Homeric subject-matter in the generation after Gavin Hamilton and represents a major work in the development of British neo-classicism.

Durno was born in London in 1755 to a Scottish father, the proprietor of a brewery at Kensington Gravel Pits. According to the archives of San Giovanni in Laterano in Rome, he was twenty-two in 1777. He was trained by Benjamin West, for whom he also worked as a copyist, and entered the Royal Academy Schools on 28 February 1769. Durno competed for the prizes offered for large-scale history paintings by the Society of Arts, winning 30 guineas for his picture Margaret of Anjou with the Prince in the Wood Assailed by Robbers in 1770 and 100 guineas for his picture Isaac, a Tyrant of Cyprus, and his Daughter, Brought Prisoners before Richard the First in 1771. Between 1767 and 1773 he exhibited one portrait and a number of historical subject pictures at the Society of Artists. At the beginning of the 1770s Durno worked with John Hamilton Mortimer, Francis Wheatley, and Thomas Jones as part of the team that provided decorations for Lord Melbourne at Brocket Hall, Hertfordshire.

Durno left England for Italy in January 1774. Between 1777 and 1778 he was living with the sculptor Thomas Banks and his wife by the piazza Mignanelli at the top of the Spanish Steps; Elizabeth Banks  noted that Durno helped nurse her husband during a severe illness in 1778.[2] Durno was at the heart of the resident British community in Rome, he knew Thomas Jones well who noted in his Memoir that the pair: ‘smoked a pipe and drank a flask of wine on the top of the Antonine Column’ in Piazza Colonna in May 1778.[3] Durno pursued the usual activities of a visiting artist, he studied after the antique, copied old masters, producing a full-size replica of Raphael’s Transfiguration and sought patronage from British travellers.

Frederick Harvey, Bishop of Derry and 4th Earl of Bristol, during the course of his six visits to Italy, established himself as one of the most extravagant and eccentric patrons of the eighteenth century. Secure in the large income derived from his Irish diocese, and after the death of his brother in 1779, from his ancestral estates, Hervey purchased and commissioned paintings and sculpture from artists on a prodigious scale. In 1779, the British dealer Thomas Jenkins wrote from Rome to a correspondent in London: ‘the Bishop of Derry Gleans Rome of its Precious monuments, & as one of his adopted Countrymen lately told him, his Collection will Surprize all the World, there never having been Such things Sent into Ireland before, or Since; chi è Contento, Gode.’ The Earl Bishop commissioned several works from Durno and by February 1781 James Irvine was informing George Cumberland in London: ‘Durno has finished two pictures for the Bishop of Derry, one the Mourning of the dead body of Hector.’[4] Irvine added that Durno had ‘shut himself up for several months at a picture of Alexander saving his father at the Battle of Marathon ... The figures are large as life and finely grouped. He returns to England the beginning of summer & intends exhibiting the picture.’[5]

Durno in fact remained in Italy and established a highly successful practice as a history painter. In February 1783 Durno was ‘about a great work to be painted in a hall in Genoa,’ having entered the competition for the decoration of the Doge’s Palace in that city. He was to win a prize for his design (Liguria Triumphans) but the competition was won by Domenico Tiepolo.[6] In the November of the same year he was completing a depiction of The Murder of Virginia by her own Father which according to the sculptor Vincenzo Pacetti he wished to present to Prince Marcantonio Borghese, then in the midst of his redecoration of Villa Borghese.[7] A British traveller saw the Virginia in March 1784 and noted that it had ‘a surprising show of Fire & Animation to the distracted Parent.’[8] It is worth pointing out that Durno’s studio was very much a Grand Tour attraction and that by the mid-1780s he was producing a large number of historical canvases, completing a pair of Shakespearean canvases for Canova’s great patron, John Campbell, 1st Lord Cawdor.

The Earl Bishop continued to commission works from him. In 1786 Durno made a replica of Cawdor’s Shakespearean pictures, Jacob More, the Earl Bishop’s Roman agent reporting: ‘As good as the first one which Durno has got’, adding: ‘The Imogen is not yet finish’d and the Hector taking leave of Andromache not yet begun but the cloath prepard’. In May the following year More informed Lord Bristol that Durno: ‘is making studdies for the Large Picture of Priam for Your Lordship. I have receved the falstaff and the Picture from Cymbeline the other picture from Hector not being suficiently dry must be sent by the next opportunity’. This is the first mention of the present painting: ‘the Large Picture of Priam’ being Priam Returning to Troy with the Body of Hector.

In May 1791 the sculptor Christopher Hewetson reported to George Cumberland that ‘Durno has finished his great picture for Ld. Bristol.’[9] Durno evidently placed it on exhibition in his rooms by the Quartiere dei Avignonesi, close to Piazza Barberini, as Charles Grignion reported to Cumberland: ‘Durno some time since exhibited his large picture of Priam returning to Troy with the body of Hector, we think it the best thing he has done.’

Durno’s highly charged canvas captures the moment King Priam returns to Troy with the body of his son Hector. Taken from the end of the Iliad, the strongly frieze-like composition shows the bowed King Priam seated on a chariot, contemplating the corpse of his son, whilst Hector’s widow, Andromache is shown lying prostrate across his body and his mother Hecuba is shown arm outstretched leaning over them. On the left of the composition, Durno has included Hector’s brother, Paris, dressed in Phrygian costume. In the background, behind the chariot, Durno has included Helen, who, despite having been abducted by Paris, also mourned Hector, according to Homer because of his kindness. Following Homer’s account, Durno shows a multitude of Trojans mourning their dead prince.

Richly painted and dramatically modelled, Durno’s painting shows awareness of earlier Homeric works, particularly Gavin Hamilton’s sequence of depictions of the Iliad which had been published in popular engravings by Domenico Cunego. Durno’s composition is indebted to Hamilton’s Andromache Bewailing the Death of Hector, the frieze-like arrangement of Hector’s body on the funeral car, Andromache’s prostrate pose and the highly sculptural arrangement of mourning figures all recall Hamilton’s painting. Although the more Baroque elements of Hamilton’s composition, such as the drapery in the background have been stripped out, rendering Durno’s image more severely classical, suggesting both the influence of Roman sarcophagi and the relief-sculpture of his contemporaries, particularly Thomas Banks. Several studies relating to the painting survive in an album of Durno’s drawings in Berlin, including a profile study of the head of the seated woman holding a child.

Durno’s classical paintings have never before been seriously considered. From the documentary evidence it is clear that he designed a tight Homeric cycle for the Earl Bishop. Although not painted in sequential order, Durno and the Earl Bishop (or More), are likely to have discussed the programme: beginning with Hector’s Farewell to Andromache, followed by Priam Returning to Troy with the Body of Hector and culminating with Andromache Bewailing the Death of Hector. This is an unusual trio of episodes and seems to concentrate less on the epic of the Trojan wars, than the human consequence of the conflict in the life of Hector and Andromache, unusually Achilles is absent from the sequence. 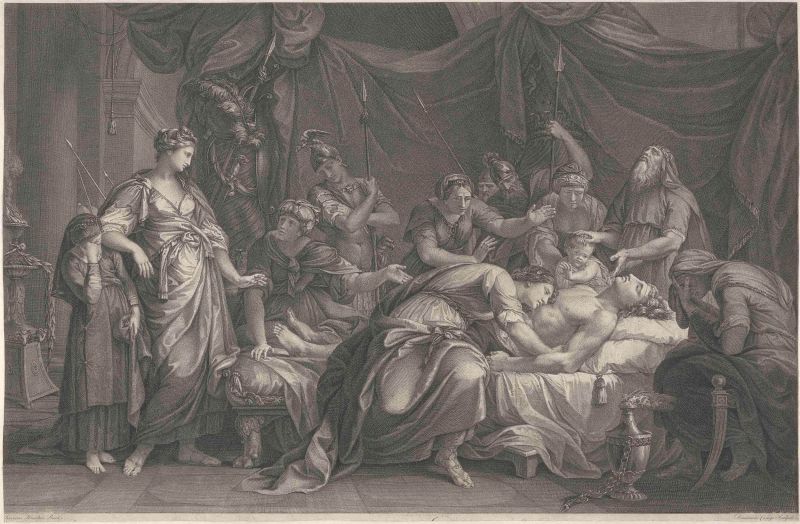 The painting was apparently still in Rome in 1794 when Archibald Skirving commented that Durno was ‘like to have a misunderstanding with Lord B[ristol] on account of his refusing to exhibit his picture of Priam’ in London. It is likely that Durno’s painting remained part of the Earl Bishop’s extensive property in Rome, some of which was auctioned off by the Roman authorities in 1804.[10] The later history of the painting is unknown and it is published here for the first time.