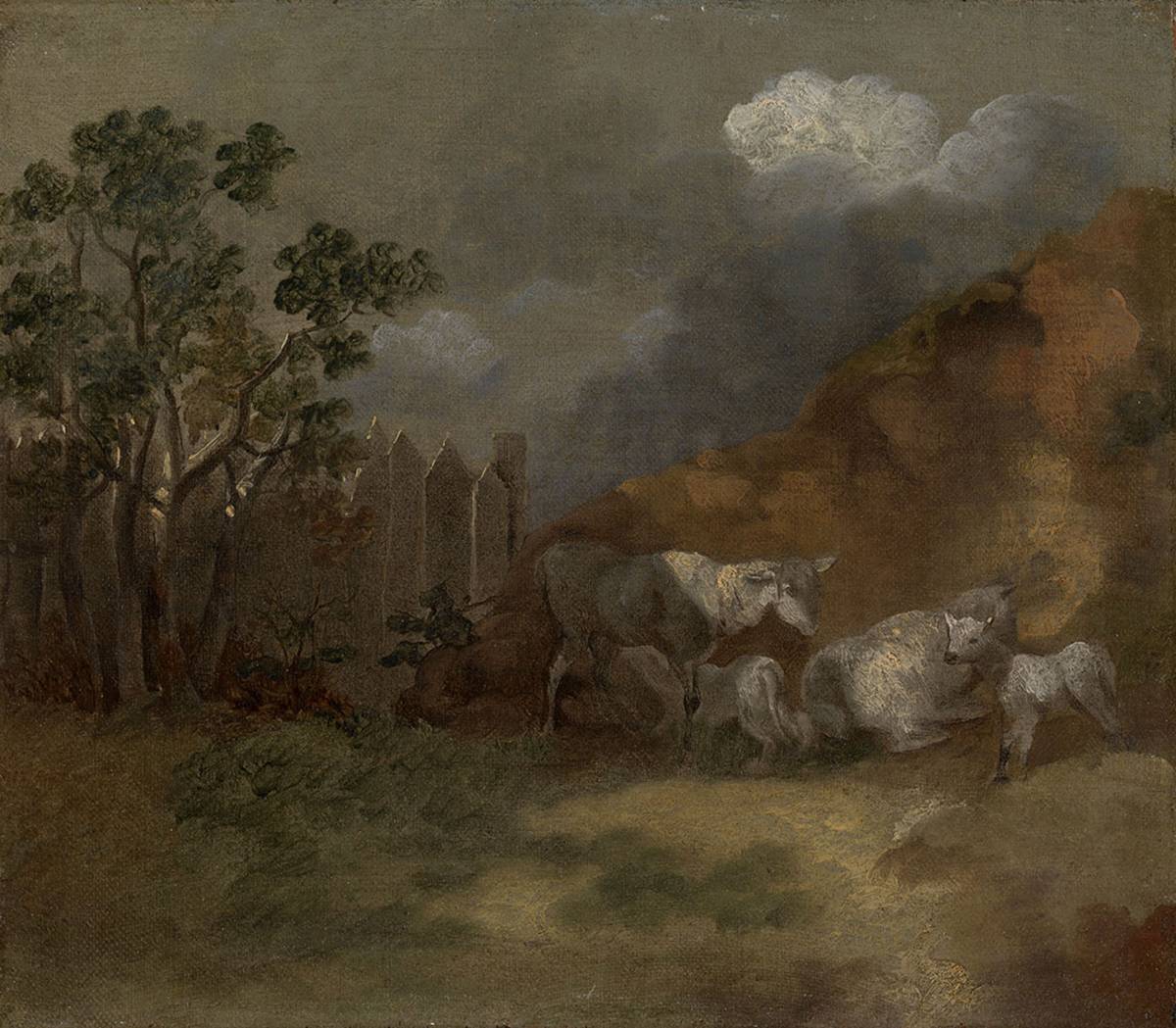 This charming small painting numbers amongst the earliest of Gainsborough’s known works, indeed, it is no. 1 in Hayes’s catalogue raisonné of the landscape paintings. In spite of its early date, this picture demonstrates a fresh and sensitive handling of paint and is notable for marking the very beginnings of Gainsborough’s life-long fascination with extemporising on a few simple bucolic motifs. Gainsborough’s obituary recorded that Gainsborough made his first essays in the art by modelling figures of cows, horses, and dogs, in which he attained very great excellence.[1] Although Gainsborough’s handling of recession is naïf one senses an inherent sophistication of approach to the treatment of both the group of sheep and the clump of trees and shrubs which already indicate the path which his interest in landscape was going to lead him.

Gainsborough’s early debt to Francis Hayman as well as his participation in the execution of the decorations at Vauxhall Gardens is generally acknowledged and whilst Hayes has underlined Hayman’s influence in the younger artist’s small full-length portraits he appears to have ignored the similarity of the paling fence seen in our painting and that found in Hayman’s portrait of Master John Wightwick (Plymouth Museum and Art Gallery).[2] Indeed the composition of our small painting to some extent mirrors the details and construction of the Plymouth portrait. The present landscape can be dated by comparison with the well-known painting of the dog ‘Bumper’ (Private collection) which is signed and dated 1745 and as Belsey has recently noted provides the rubric for dating and attributing paintings to the young artist.  John Hayes opined that this picture ‘is identical with Bumper in the fresh, liquid handling of the foliage, the loose touches of yellowish impasto in the foreground, the rather stiff delineation of the tree trunks.’[3] Our landscape may also be compared with the small unfinished ‘Open landscape with a cottage at the edge of a wood’ (Hove Museum of Art) and the slightly later unfinished ‘Wooded landscape with winding path’ (Beit Collection).

Belsey has recently noted that: ‘In this painting Gainsborough dapples the meadow and the sheep with sunlight, he uses brilliantly light clouds and highlights the edges of the paling fence and tree trunks on the left. The lamb on the right, concentrating on the new activity of standing, is posed just like Bumper and the nervously painted clump of miniature trees to the left, wrong in scale, anticipating the intertwined saplings that appear in many of drawing Gainsborough made later in the decade. This unassuming painting has a nervous energy that anticipates Gainsborough’s extraordinary future creativity’.[4] Undoubtedly, our small painting is remarkable inasmuch that it demonstrates that Gainsborough had from an early age a most distinctive artistic voice which was to be developed and sophisticated over the following four decades of his life; however, it is noteworthy that this one of his earliest compositions already contained most of the elements that he was expand on over the years.