Only a dozen or so drawings by Rosalba Carriera survive, most of which are monochrome sketches recording her finished pastels, making this engaging sheet a particularly rare and attractive rediscovery. Rosalba was the greatest professional pastellist of the first half of the eighteenth century, she attracted a remarkable international clientele, corresponded with the foremost collectors and connoisseurs across Europe and her studio in Venice became a Grand Tour sight in and of itself. Whilst her exceptional virtuosity as a manipulator of pastel has been extensively discussed, her small, but important oeuvre of drawings has been largely overlooked.[1] This expressive and exquisitely rendered black and red chalk drawing gives an indication of her graphic skill, as well the enduring influence of her relationships with the leading figures in early eighteenth-century France.

Rosalba Carriera was born in Venice, the precise nature of her training remains obscure, although she almost certainly had contact with the great Roman painter Benedetto Luti, who was also a pioneering pastellist. Initially working as a miniaturist, Rosalba achieved considerable fame being elected to the Accademia di san Luca in Rome in 1705 as a ‘pittrice e miniatrice veneziana’, her reception piece was a miniature on ivory. From 1708 she began to work increasingly in pastel, this shift may have been prompted by the British diplomat, Christian Cole and it is notable that her portraits were particularly sought after by British visitors to the city. From early in her career, Rosalba was in touch with leading Parisian dealers and collectors; she corresponded with both Pierre-Jean Mariette and Pierre Crozat, travelling to France in 1720 where she was admitted to the Académie de Peinture et de Sculpture and prepared a portrait of Jean-Antoine Watteau. Rosalba evidently absorbed ideas from Watteau and perhaps his influence can be seen in her incisive use of red and black chalk in this delicate drawing.

The drawing shows a beautiful young woman with flowers in her lap and her right hand holding a single bloom, in type, she follows Rosalba’s pastel personifications of Spring, whilst the design varies from any known iteration. Made in the 1720s this unusually complete sheet does not directly relate to any known pastel by Rosalba raising the question of its purpose, as, unlike Rosalba’s other surviving drawings, it appears not to be a ricordi. The contemporary inscription on the verso possibly refers to a French patron, although no similar name appears in Rosalba’s Paris diary, we know that on her return to Venice she regularly sent works to France. It is perhaps suggestive that this drawing remains on its original French eighteenth-century mount. 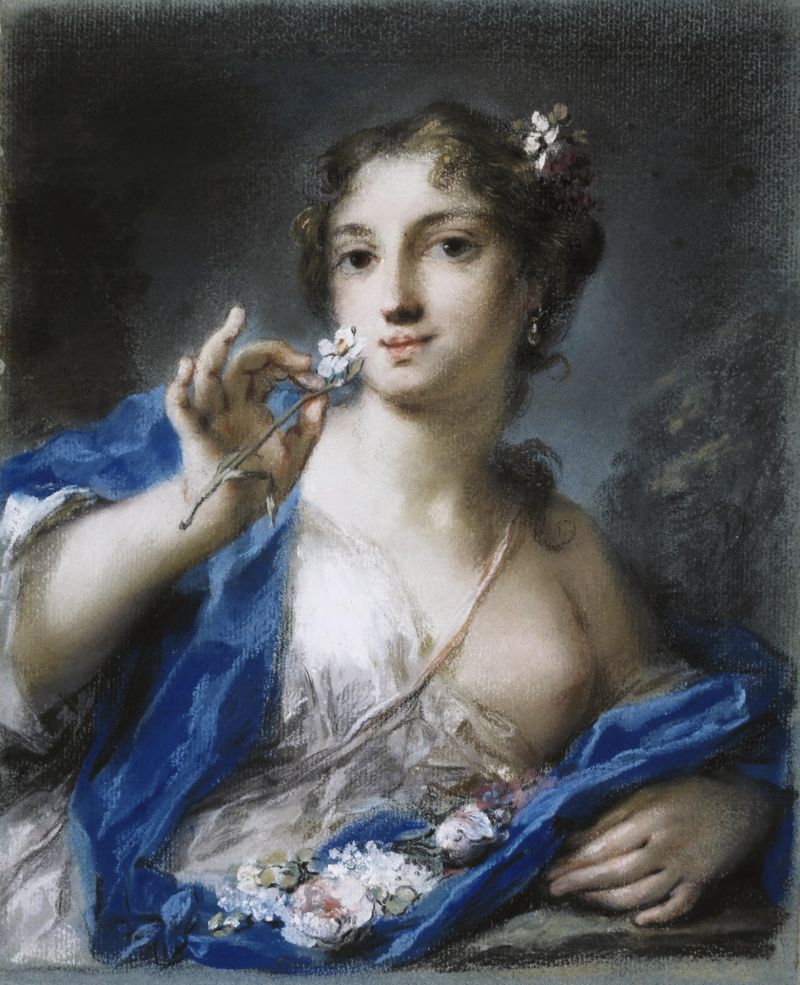