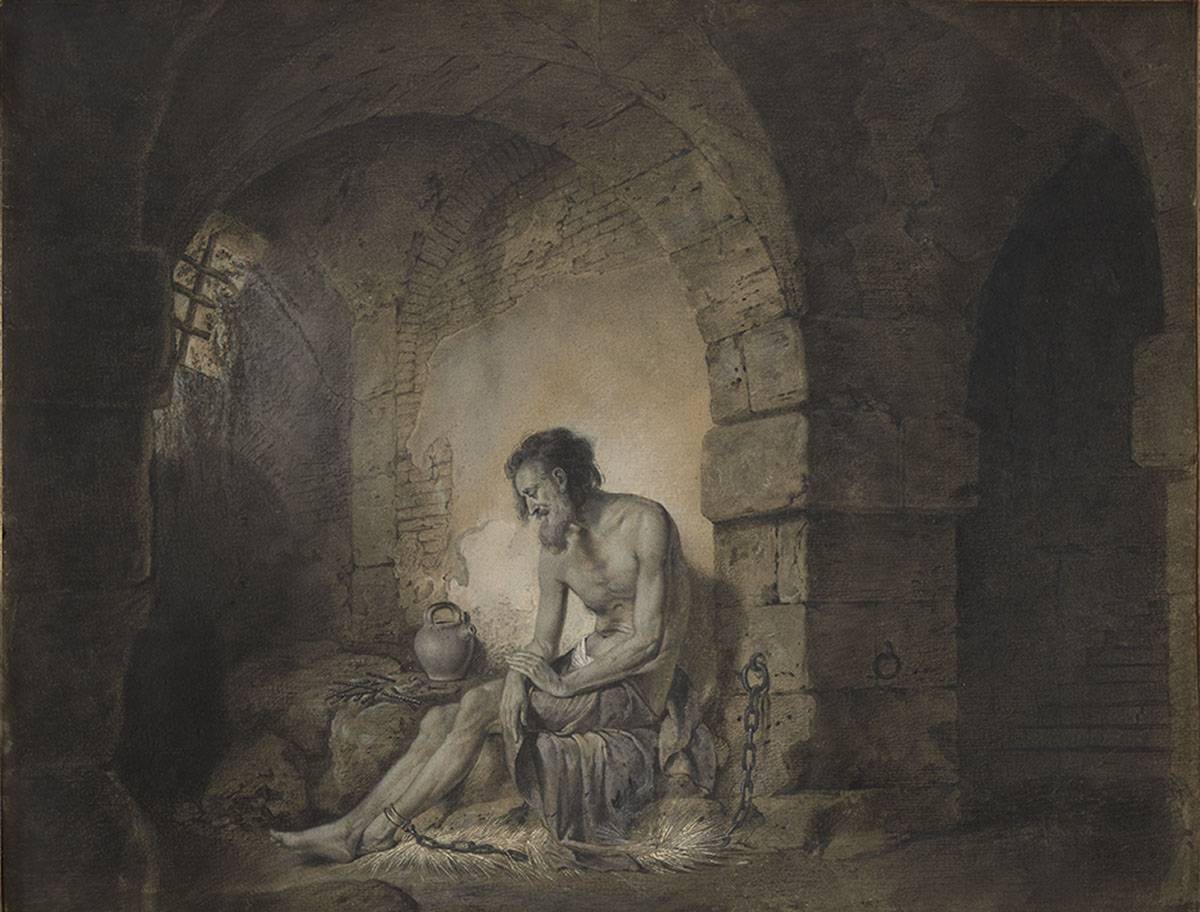 This complex, richly worked drawing provides a fascinating insight into the mechanics of the commercial print trade in London in the last quarter of the eighteenth century. Executed by the painter, printmaker and publisher Josiah Boydell, the drawing functioned as an intermediary, recording the likeness of Joseph Wright of Derby’s 1774 painting of The Captive ready to be engraved by Thomas Ryder. The drawing is virtually the same size as the published print, which was amongst the large number of reproductive engravings produced by John and Josiah Boydell after celebrated old master paintings and popular contemporary works. This drawing is a remarkably rare survival, pointing to the skill of reproductive engravers in translating easel paintings to prints, a process which required both miniaturisation and transposing colour into monochrome. The Boydells operated the largest and most diverse print selling business in London and the present drawing is first recorded at an exhibition at The Shakespeare Gallery in Pall Mall in 1790. Along with a selection of the oil paintings John Boydell had commissioned to illustrate the works of Shakespeare from the leading historical painters of the day, the exhibition contained a sizeable number of the drawings made in preparation for their celebrated reproductive prints. This drawing was therefore framed and hung in a public exhibition as a work of art in its own right, problematising the traditional status we assign intermediary drawings for reproductive prints.

Josiah Boydell was the nephew of the more famous Alderman John Boydell, the leading print publisher and seller in London. He was bound apprentice to his uncle in 1766 and entered the Royal Academy Schools as a painter in the Summer of 1769. Boydell exhibited at the Royal Academy regularly between 1772 and 1799, he also exhibited at the Society of Artists. Boydell was apparently instructed in engraving by Richard Earlom, one of the most successful and prolific engravers, who worked for John Boydell. Boydell made a number of mezzotints including a group for The Houghton Gallery, John Boydell’s commercially successful record of masterpieces from Sir Robert Walpole’s collection.

The present drawing was hung ‘Over the chimney in the Great Room’, in a section of the catalogue listed as: ‘Drawings after the most capital pictures in England.’ The drawings, which included works by other Boydell draughtsman including George Robertson, Richard Earlom and Joseph Farington, included a heterogenous mix of old masters and works by established British painters. Whilst the majority of sheets had been made in preparation for engravings, including plates reproducing seventeenth-century Dutch paintings from the collection of John Manners, 5th Duke of Rutland and Thomas Gainsborough’s Shepherd Boy then in the collection of Henry Noel, 6th Earl of Gainsborough, there were a number of drawings of pictures that had not been engraved and published by the Boydells. One such was the drawing paired with this sheet, Boydell’s copy of Joseph Wright of Derby’s painting of Maria, from Sterne, both pictures were listed as being in the collection of Edward Pickering.

Joseph Wright of Derby had begun The Captive, from Sterne in 1774 whilst he was studying in Rome. The painting illustrated an imagined prisoner from Laurence Sterne’s A Sentimental Journey, conjured by the Parson Yorrick on seeing a caged starling:

‘I beheld his body half wasted away with long expectation and confinement and felt what kind of sickness of heart it was which arises from hope defferr’d. Upon looking nearer I saw him pale and feverish…sitting upon the ground upon a little straw, in the furthest corner of the dungeon, which was alternatively his chair and bed.’

Wright’s painting perfectly captures Sterne’s description, presenting an object for the viewers sentiment. Sterne’s novel was hugely successful on its publication in 1768 and a large number of episodes from the text were imagined in paint by artists. Wright’s painting was sold at auction in 1780 when it was acquired by Edward Pickering, who allowed Boydell access to produce his drawing.

The drawing itself is particularly beautifully handled. Drawn in black chalk heightened with touches of white and traces of watercolour. Boydell has been particularly attentive to the tonal values of Wright’s canvas, capturing the careful play of light. Wright, studying in Italy, borrowed the vaults of the Colosseum for his dungeon, lighting the interior from a small, barred window and some concealed light source. Boydell has rationalised Wright’s light source, making the light from the window stronger and more evidently illuminating. Boydell’s masterful drawing picks up on the narrative details from Sterne’s text, particularly the ‘little straw’ which is rendered in white chalk and, perhaps most tellingly, the ‘little calendar of small sticks… notch’d all over with the days and nights he had passed there – he had one of these little sticks in his hand, and with a rusty nail he was etching another day of misery to add to the heap.’ Whilst Wright had avoided the melodrama of this action, he had placed a heap of notched sticks and rusty nail next to the seated figure, a detail Boydell emphasises in his drawing. This gives a clue to the multi-valent nature of Boydell’s print making, producing a faithful reproduction of an exhibition painting, but also conscious of its role as an illustration to a popular text.

Boydell’s drawing tells us much about the complex and skilful process of reproductive printmaking in the late eighteenth century. The drawing served as a model for the engraver Thomas Ryder who produced a stipple engraving of almost the same size. The print was issued printed in black or in sepia and was initially lettered with a quotation from Sterne. The quotation was altered at some point in the life of the plate. 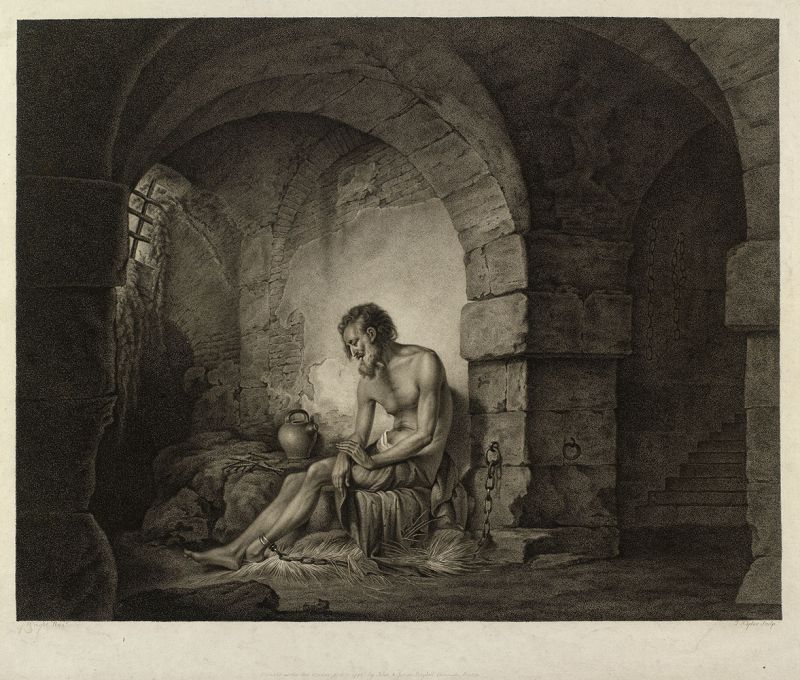