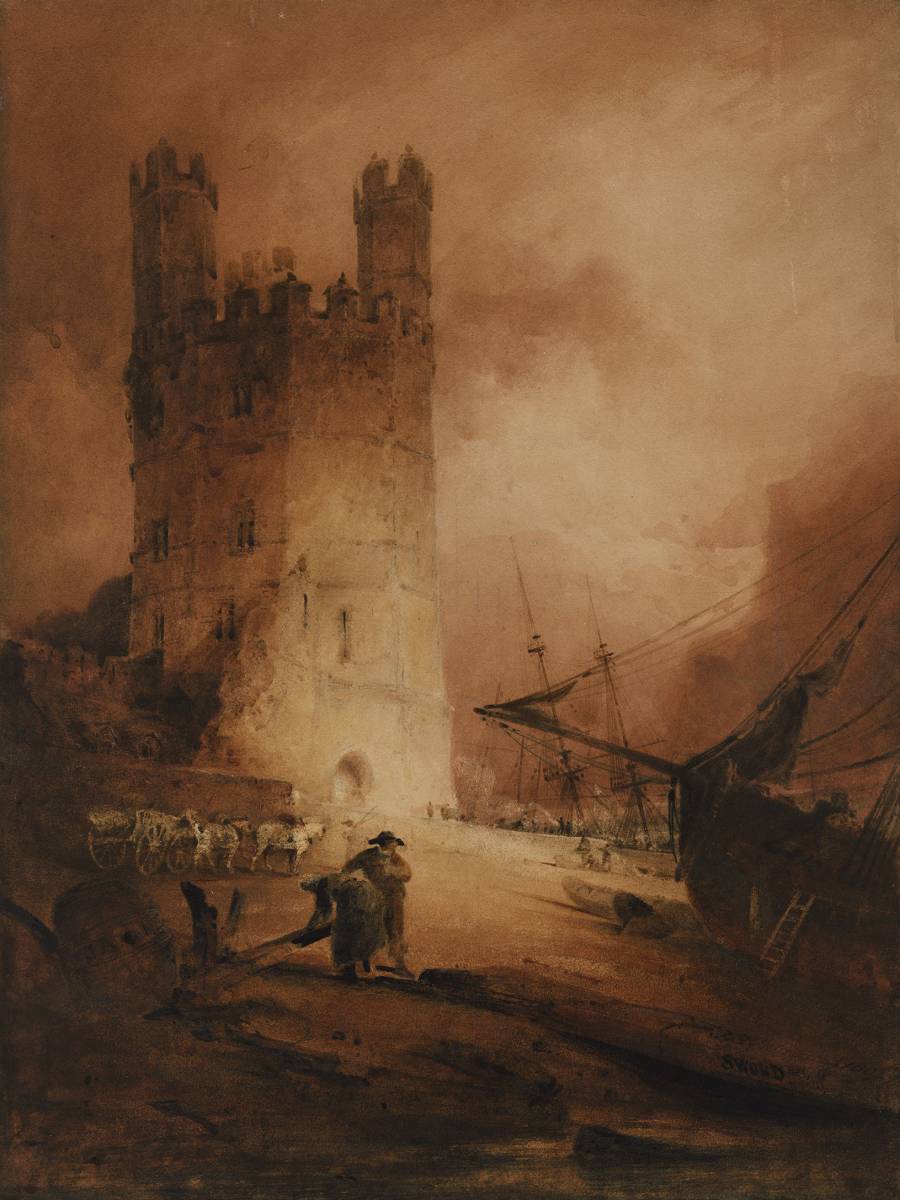 This immensely atmospheric watercolour was painted by John Sell Cotman at the beginning of his career and shows his extraordinary mastery of the medium. One of two works Cotman exhibited at the Royal Academy in 1802, this sheet shows the Eagle Tower of Caernarvon Castle at night, illuminated by a fiery orange light. The brooding atmosphere of this highly worked watercolour directly reflects his admiration and absorption of the works of Thomas Girtin. This rare and important exhibition work ranks as one of the grandest and most beautifully preserved watercolours of Cotman’s first great phase.

Born in Norwich, and like his contemporary JMW Turner, the son of a barber, John Sell Cotman had little training before his move to London in 1798. The following year, again like Turner and Thomas Girtin before him, he joined Dr Monro’s ‘Academy’ in the Strand. Monro, a physician, had treated John Robert Cozens, as a result he had a large collection of Cozens’s works, introducing a new generation of watercolourists to his deeply felt and emotional landscapes. Cozens’s technical virtuosity also offered an important precedent for the young painters, showing the potential of watercolour as a medium. From 1799 a few of these younger painters formed themselves into a society for the study of landscape, calling themselves ‘The Brothers’ with Girtin at their head. ‘The Brothers’ met in the evening in each other’s rooms, where the host would set the subject, usually a verse from the poets. They drew from seven till ten, when, according to the rule: ‘all drawing shall cease, when simple fare shall be produced with Ale and Porter.’ The members agreed that the subject of the evening should be: ‘more particularly tending to Landscape.’ We can trace the activities of the society in 1799 because a fragmentary minute book survives, it records the attendance of a number of artists including Louis Francia, Girtin and Paul Sandby Munn. The first evidence of Cotman’s membership comes in the form of a sequence of drawings made by members in around 1801, the drawings of An Ancient Castle include works by Girtin, Munn and Cotman. In November 1801 Girtin left London for Paris and Cotman becomes the leading light in the society, regularly hosting the evening sessions.

This watercolour demonstrates what he learnt from being in close proximity to Girtin, Francia and Munn. The grand, vertical format; the sombre, almost monochrome palette, the richly worked watercolour surface and the highly atmospheric treatment of the subject matter all recall the three artists at their height. Technically the view could be described as a Girtinean exercise in Welsh topography. The view is the famous Eagle Tower shown from the East, in the foreground is the slipway down to the tidal Menai Strait where a boat is resting on the bank. But as in Girtin’s greatest mature watercolours, any real topographical purpose has been overwhelmed by the sense of atmosphere exuded by the orange sky. Cotman has emulated not only Girtin’s sombre palette but also his rich, textured surfaces, using thick areas of pigment to give a deep opacity, in the barrel on the left for example, and scratching out to articulate the team of horses pulling the cart in the middle distance. In palette and effect this watercolour also captures something of Louis Francia’s greatest works, for example his Parys Copper Mine, Anglesey, North Wales which was painted in 1800 and now in the Morgan Library and Museum, New York.

In Cotman’s watercolour, as in Francia’s depiction of Parys Copper Mine and Girtin’s works, the monumental thirteenth-century fortification takes on a sinister quality, glowering over the diminutive figures working at its base. This points to the emotional potential of watercolour at this date. Edmund Burke’s Philosophical Enquiry into the Origin of Our ideas of the Sublime had articulated the powerful aesthetic of fear and dread, an aesthetic that was heightened by the unknown. Cotman uses his rich, layered washes to obscure the view beyond the tower, all but obliterating the town and the rest of the castle. The rich colouring and bright, furnace-like effect of light, recall Cotman’s own encounters with Britain’s new industrial sites. By 1802 Cotman was listed lodging with Paul Sandby Munn at 107 New Bond Street. Munn and Cotman made a tour of Wales in the same year, both using the same, rich, orangey palette to produce views of the Bedlam Furnace, Madely Dale, Shropshire. In the case of this watercolour the industry is only the normal trade of the Welsh town, shipping on the Menai Strait in the form of coal briggs.

That this is a major public statement by Cotman is demonstrated not only by his decision to submit it for exhibition at the Royal Academy in 1802, but by the fact that he etched the same view in 1838 in his Liber Studiorum. Preserved in astonishingly fresh and rich condition, this watercolour is one of the greatest produced in his first, pioneering years in London. It demonstrates a technical virtuosity and emotional depth that made Cotman not only the equal of his contemporaries, particularly Girtin and Turner, but Girtin’s true successor. 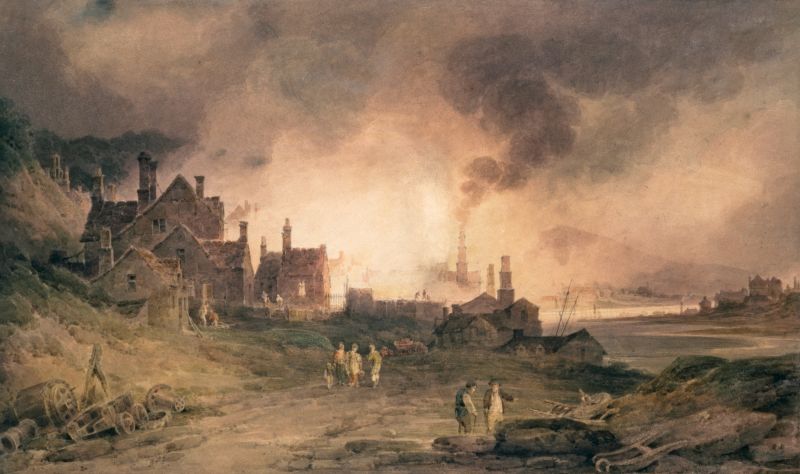