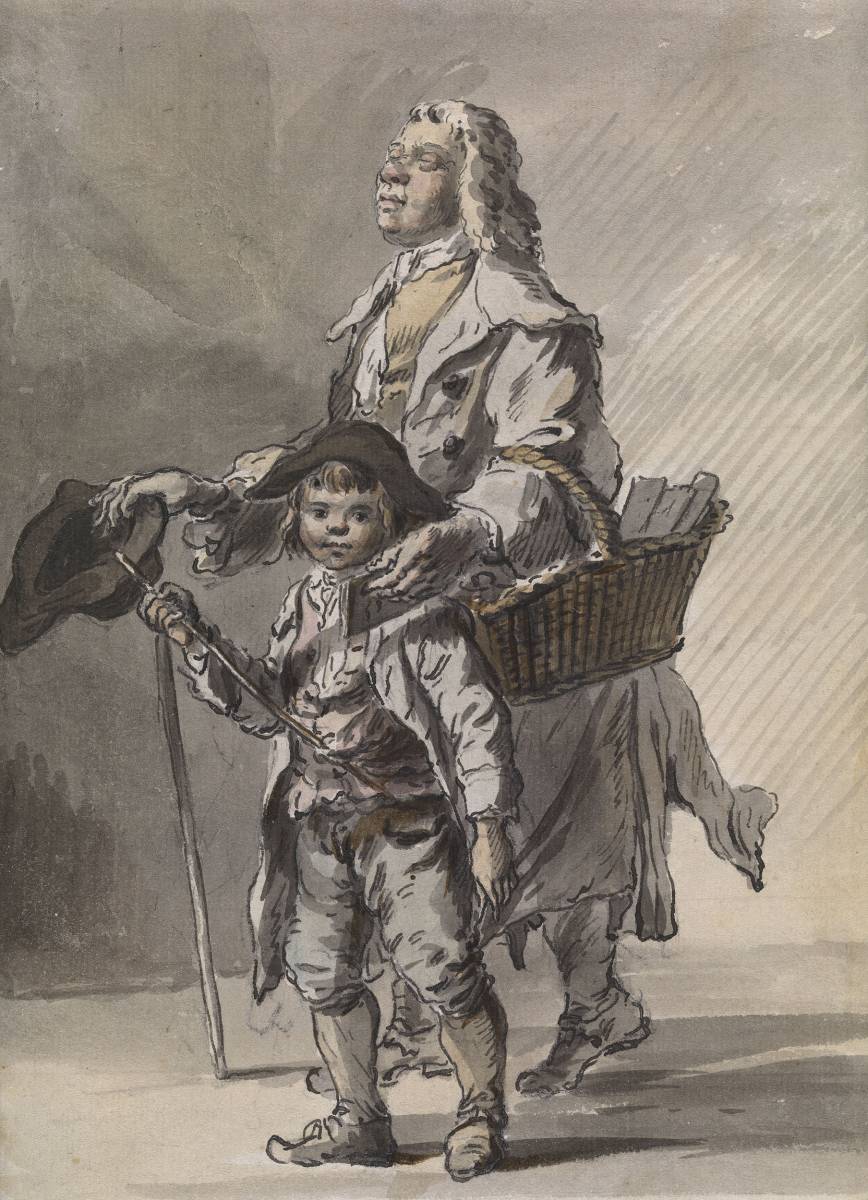 This unusually sensitively characterised drawing was made by Paul Sandby in preparation for a projected series of engravings recording the Cries of London. Sandby’s drawing of a Walking Stationer was turned into an etching published as part of Twelve London Cries done from the Life in 1760. Sandby’s project fitted into a graphic tradition of recording the itinerant trades of London, Marcellus Laroon having published a series of Cryes of the City of London in 1688. Sandby’s prints and their associated drawings have been the subject of much scholarly debate and this previously unpublished sheet offers a new perspective on the process and techniques of Sandby’s project.[1]

Sandby trained initially as a military draughtsman and was involved in the Survey of Scotland, the project charged with making maps of the highlands, as part of the campaign to restore peace in the area after the rising of 1745. The Cries date from before his maturity as a landscape painter, suggesting that he was attempting to forge a career by working for the London print trade. Sets of engravings of itinerant tradesmen and performers had been popular in Europe for centuries; in 1688 Marcellus Laroon the Elder first published his Cryes of the City of London, which proved so popular that they were regularly re-issued throughout the eighteenth century. As Bonehill and Daniels have suggested, it was a revised and ‘improved’ set of the Laroon plates made by Louis-Phillippe Boitard in a consciously French manner and published in the 1750s which may actually have prompted Sandby to execute his series. Boitard updated the costumes and faces of Laroon’s plates, introducing models borrowed from François Boucher, the resulting figures were felt to be too refined and elegant to be realistic, so when Sandby executed his series, he made a point of emphasising that his figures were 'done from life.’

This compelling study of The Walking Stationer was published with the lines: ‘Memorandum books a penny a piece of the Poor blind/ God bless you pity the Blind’ and in French: ‘Le Libraire embulant/ Ayer pitié du pauvre Aveugle, achetter/ ses petis Livrès et que bon Dieu vous benisse.’[2] Showing a blind man holding a basket of books and being guided by a young boy, the composition is one of Sandby’s most compelling. Sandby has removed all extraneous details – landscape, other figures or paraphernalia of the trade – concentrating on the figure of the Stationer and his young guide, who looks out at the viewer.

Though Sandby only issued twelve etchings of the Cries over seventy watercolour drawings by Sandby exist for the project.[3] Seventy-six of these drawings were sold at Christie’s in 1965 from the collection of Lord Bruce and show as John Bonehill and Stephen Daniels have suggested ‘a considerable degree of stylistic and technical diversity.’[4] In fact many of the drawings from the Bruce album are fairly crude in execution suggesting that they were preliminary studies, which Sandby then refined before he prepared the etching.  The Bruce album study for the plate of ‘My pretty little Gimy Tarters’ (Yale Center for British Art), shows the figure rapidly blocked in with only a schematic treatment of the street scene which appears behind the figure in the published print. This sheet, by contrast, is considerably closer to its related etching. It is therefore possible that this beautifully rendered study, which Sandby prepared first in black chalk and then worked up in ink and watercolour, was made as the model for the final etching, a possibility given further weight by the indentations for transfer to the plate.

It is possible that Sandby published no further groups of these etchings because he was increasingly lucratively occupied with painting landscape both in gouache and watercolour, as well as in oils. In 1760 he showed two oils, including the fine View of Lord Harcourt's Seat at Newnham, and three watercolours at the first exhibition of the Society of Artists.