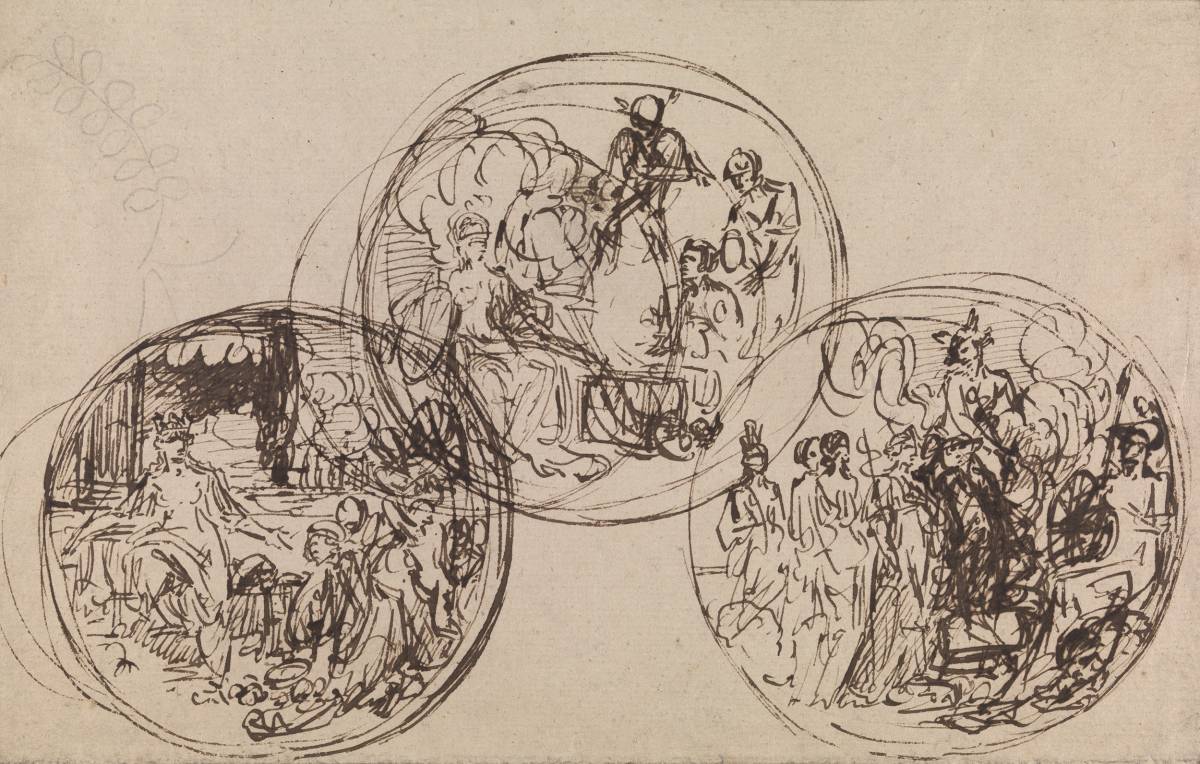 'British commerce: the four corners of the globe bringing treasures to Britannia'

This characteristic, boldly handled drawing by Benjamin West was made in preparation for the ceiling of the Queen’s Lodge at Windsor. Commissioned by King George III, the ceiling was designed by West and executed in coloured marble dust by a German confectioner named Haas.[1] West’s designs depict a scene of Britannia receiving merchandise from the four Continents, presided over by the figure of Mercury, the god of merchants. The three roundels show West’s three different designs for the same scene. On the left, Britannia is seated with a ship in the background, suggestive of maritime trade, whilst the Continents are ranged to the right; in the second, Britannia, now with a distinctive shield emblazoned with the union flag, is joined by Mercury and in the third, the action is re-orientated with the Continents coming from the left. The third is closest to the most complete surviving drawing, now in the Museum Nacional de Arte Antiga, Lisbon which shows that the forth of the Continents, America, wearing a feather headdress. West produced a series of oil modelli for the project, but the ceiling itself was not designed to be painted, but rendered in coloured marble dust, a new process known as Marmortino. The craftsman responsible for the ceiling was reported by the contemporary Windsor Guide as being named Haas, a confectioner who had been employed principally to make coloured sugar centrepieces at Windsor. The 1792 Windsor Guide noted the novel medium stating: ‘only one simple article is used by the artist, which is stained marble dust; this is strewed with a piece of card, either on board or canvas. The composition of, as well of the manner of using the cement, is known only to the artist himself, which, upon trial, has been proved to resist the various changes of the weather.’[2] The ceiling no longer exists, having been destroyed by George IV in 1823.