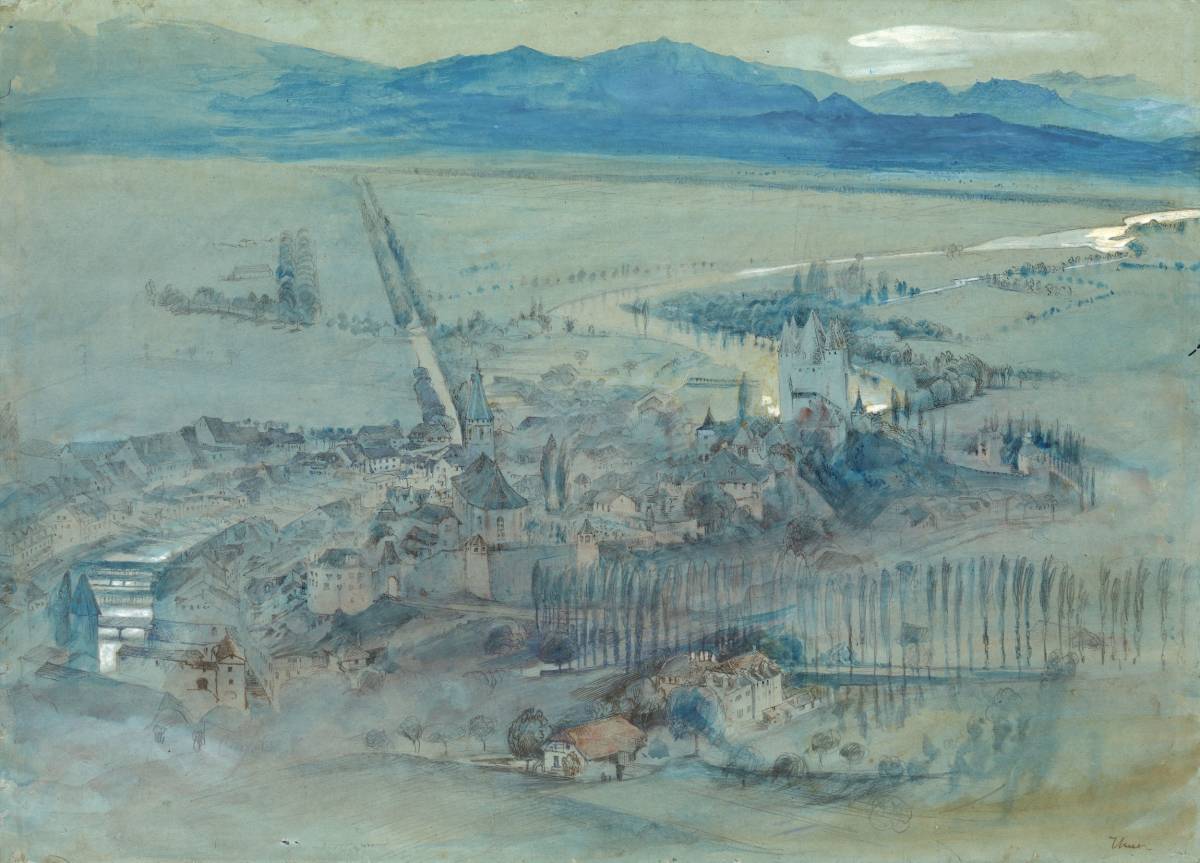 'Out of four months on the Continent, I have taken only ten days of whole work, and ten days half work: those were to make some drawings of old bits of Thun and Fribourg, likely to be destroyed before I get back to them again.'[1]

The present, characteristic view of Thun was the result of one of these visits. The sweeping view shows the town from the east looking west; the turrets of Thun castle are prominent on the right and the river Aare is shown meandering off to the right whilst a straight road – now called the Allmendstrasse - stretches into the distant Alps. The present sheet shows Ruskin’s debt to Renaissance landscape drawings and prints, his elevated position allowed him to produce a bird’s eye’ view of the town, similar to the mountainous landscape which Dürer included in his great depiction of Nemesis. In this largely tonal study, Ruskin has produced a near monochrome study to capture the effect of light. Ruskin captures the light reflecting on the river with touches of white gouache, whilst the distant hills are executed in rich blue watercolour.

In common with other expansive landscapes Ruskin produced in Switzerland, his view of Thun includes areas of dense detail and passages which are entirely absent. It was a method which Ruskin promoted to his own students in The Elements of Drawings: ‘When your time is short, or the subject is so rich in detail that you feel you cannot complete it intelligently in light and shade, make a hasty study of the effect, and give the rest of the time to a Düreresque expression of details.’[2]

Ruskin’s motivation for executing these topographical studies in the Alps seem to have been partly his interest in Turner – who produced numerous atmospheric studies of Thun and its lake – and partly antiquarian. As Ruskin expressed in his letter to Pauline Trevelyan, he was keen to capture aspects of the town before they were destroyed. This explains both the sensitivity to light and atmosphere manifest in the composition and the careful attention to architectural detail. Ruskin produced a number of expansive landscape drawings of Swiss towns but this is an unusually sensitive and finished work. The purpose of Ruskin’s studies were to further define Turner’s view of Switzerland and to distil his own interest in the inter relationship of Swiss architecture, history and landscape. As such the present sheet, with its careful depiction of Thun Castle, the city walls and its principal church, the fourteenth-century Statdkirche and their relationship to the sinuous river and the distant mountains makes a neat visual analogy of Ruskin’s aims and aspirations.