'The Hatchment for poor Mrs Roberts gave the house a melancholy aspect.’

This little-known and atmospheric upright format landscape is one of a group of deeply personal works that chronicle changes in Constable’s native Suffolk village.  In this instance it commemorates the death of Sarah Roberts, an intimate friend and neighbour of the Constable family at East Bergholt. This fluidly painted work depicts West Lodge, one of the principal houses in the village situated opposite the Constable house on Church Street, a place that appears in numerous paintings made by Constable throughout his life. This painting is unusual because it commemorates a very specific event. In December 1811 Constable’s mother, Ann, wrote to him explaining that ‘Dunthorne has completed his achievement and exceeding well done indeed.’[1] The ‘achievement’ was the armorial hatchment that was set-up above the front door of West Lodge following Sarah Roberts’ death, painted by John Dunthorne senior. As was the custom in the early nineteenth century, the hatchment remained in place for six months following Sarah Roberts’ death, prompting John Constable to note in a letter to Maria Bicknell that it ‘gave the house a melancholy aspect.’

Constable famously observed to his friend and patron, John Fisher: ‘I should paint my own places best – Painting is but another word for feeling.’ This revelation underscores the power of Constable’s most successful works: the paintings that captured the familiar views of his native Suffolk, the views which he invested with the most emotion. The present brooding landscape is a rare occasion where we can categorically decode Constable’s ‘feelings.’

Sarah Roberts was a fixture in Constable’s early life. She had moved to East Bergholt with her husband Philip in about 1756 and remained after his death. She was held in high regard by the community and was evidently a close friend of the Constable family appearing regularly in Ann Constable’s letters to her son. In the August of 1809 Ann Constable reported: ‘Mrs Roberts poorly – she says she always thinks of you, at the setting sun, thro’ her trees. Surely this is a kind retention at 86 – but in conformity to her whole system of kindness to us.’ The view from (and of) the lawn of West Lodge was one that had an enduring appeal for Constable. He noted to Maria Bicknell in November 1811, shortly before Sarah Roberts’ death, ‘I have tried Flatford Mill again – from the lock – and some smaller things – one of them (a view of Mrs Roberts’s lawn, by the summer’s evening) has become quite a pet with me.’[2] This view would endure in Constable’s imagination, eventually becoming a plate in his 1830-2 publication Various Subjects of Landscape, Characteristic of English Scenery’.  The familiar red brick façade of West Lodge, with its pedimented doorcase, white picket fence and framing clumps of trees became a regular subject for Constable around 1811.

The Constable family correspondence reveals that John, in London, received regular updates on Sarah Roberts’ death, funeral and bequests. The Constables had all been left mourning rings and ‘a goldsmith from Colchester’ came to fit them.[3] Ann Constable was delighted to receive a painting Constable had painted for West Lodge and news was given of Dunthorne’s hatchment.[4] This provides powerful context for the present painting. Constable was evidently moved by the death of his old neighbour and the loss of a fixed presence in his community. He captures the familiar view of West Lodge from an oblique angle, the handsome brick front shielded by the screen of trees. In Constable’s other sketches of West Lodge, he chooses an elongated landscape format, here the choice of an upright format adds to the sense of foreboding, the trees crowd the house and the full Summer canopies almost block out the sky. Constable shows a changeable sky, the carefully observed dynamic of the weather somehow underscoring the gloomy atmosphere of the painting.

Constable had experimented with upright landscapes from 1802 and was aware of a number of Claude’s upright compositions, including one he copied.[5] This boldly conceived work eschews Claudian idealism and instead conjures the sombre qualities of Jacob van Ruisdael’s Jewish Cemetery, a painting Constable admired greatly. Conceived as an easel painting, rather than a rapid oil sketch, this grand painting was conceived on the scale of a Dutch cabinet painting. It is possible that for Constable the bold hatchment recalled the placement of similar armorials in views of Dutch golden age church interiors, certainly the hatchment and open-door act as the focal point of the painting. Constable has animated the painting by including a single figure on the left: a woman in a distinctive red shawl and black bonnet, the same figure appears in countless of Constable’s paintings at this date, including a slightly earlier view of West Lodge now in the collection of the Yale Center for British Art, New Haven.[6]

Executed with Constable’s characteristic technical facility, this painting offers a more profound insight into Constable’s concept of landscape than mere painterly effect. The melancholy atmosphere and sense of sombre foreboding is not imagined but designed. Recording, as it does, the death of a pillar of East Bergholt’s community, the painting ranks as a profound autobiographical document, a rare instance in which we can accurately read the ‘feeling’ behind Constable’s painting. 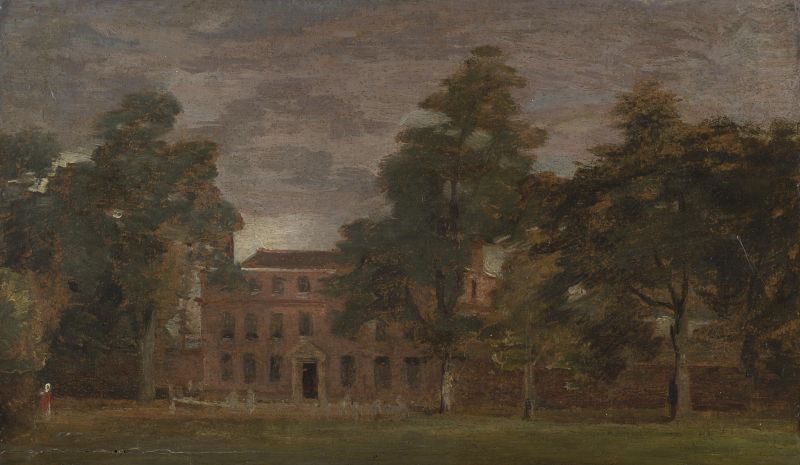