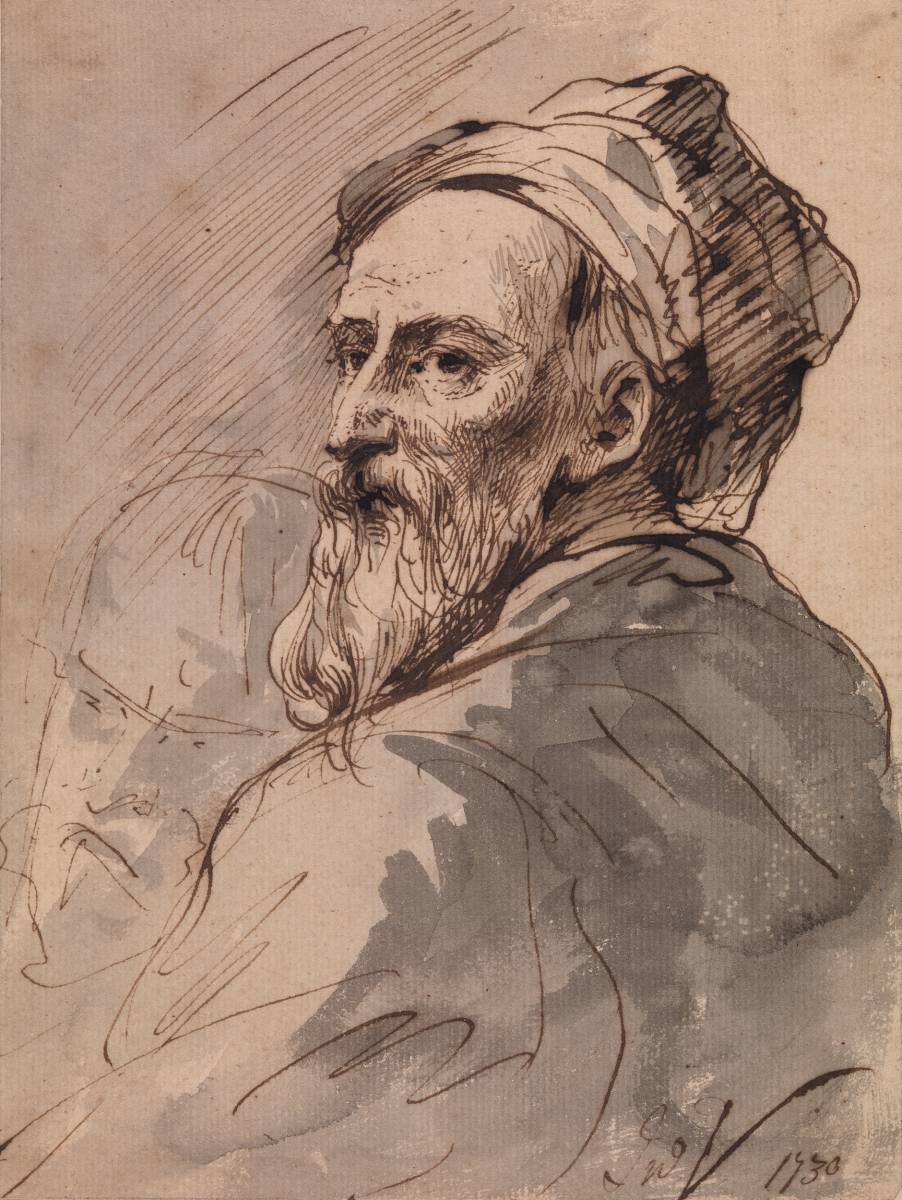 This sketch demonstrates Vanderbank's verve and originality as a draughtsman. By 1725 Vanderbank was one of London's leading portrait painters, Vertue wrote that following the death of Godfrey Kneller in 1723, he could have 'carryd all before him', yet although he lived in a grand style, he is not known to have assembled a collection of old master drawings in the tradition of Lely, Riley, Richardson and Hudson.

Perhaps any collecting ambitions were held in check by his constantly precarious financial situation, which led to insolvencies in 1724 and 1729. Even so, this drawing reveals that Vanderbank engaged closely with old master drawings by making copies and pastiches and this study informed his own work.

Vertue underlined the influence of Vanderbank's draughtsmanship at several points in his notebooks. His own brother studied under Vanderbank, and 'there particularly improved his drawing much.[2] Arthur Pond, another of Vanderbank's pupils, studied 'by drawing and studying after painting the heads of Vandyke &c...[and] drawing in Clair-obscure.'[3] Vertue also suggested that the idea of painting sitters in costumes from Van Dyck's era was first proposed by Vanderbank's pupil John Robinson in the 1740s. However, Vanderbank's 1737 portrait of Lady Yonge at Sudbury Hall, which is based on a portrait of Rubens's wife then thought to be by Van Dyck, indicates that the innovation was his.[4] On learning of Vanderbank's death, Vertue judged him in 'drawing, and Painting, of all men born in this nation superior in skill.'[5]

The loosely indicated second head and Vanderbank's choice of grey wash suggest that this boldly handled drawing is more likely to be based on a drawing than a lost engraving, perhaps of an early seventeenth century artist. It is comparable to many of the portraits in Van Dyck's series of prints, known as the Icones, such as the portrait of Inigo Jones, of which Vertue records that Vanderbank made a copy.[6] In the British Museum is a similar drawing by Vanderbank which seems to have been adapted from Van Dyck's etching of the 4th Earl of Pembroke from this series.[7] We know from the evidence of contemporary auctions that Vanderbank’s bravura wash drawings were highly valued by collectors.