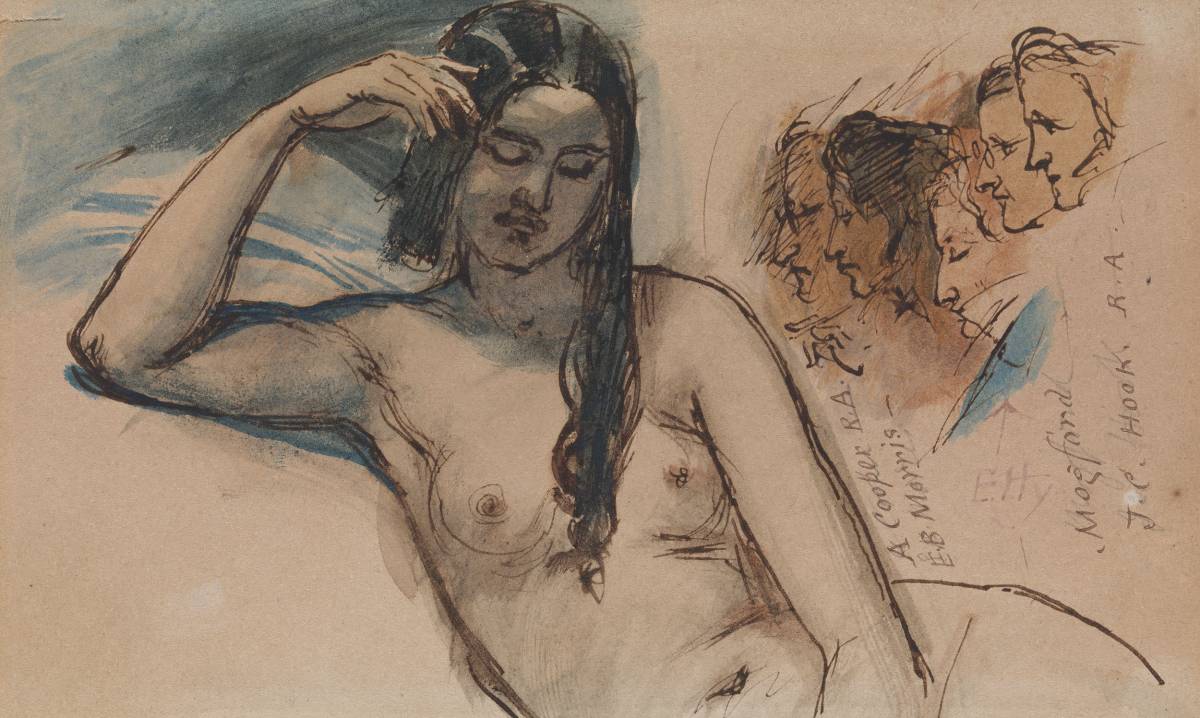 William Frost was a protégé of William Etty, he devoted a great deal of his time to drawing and painting the female nude. This informal sketch shows a female model posed in the life school of the Royal Academy being studied by a group of male artists identified by Frost on the sheet as: Abraham Cooper, Ebenezer Butler Morris, John Mogford, John Clarke Hooke and William Etty.

Having received the academy's gold medal in December 1839 for his painting Prometheus Bound by Force and Strength, Frost entered the houses of parliament competition in June 1843, winning a £100 third-prize premium for his cartoon Una Alarmed by the Fauns and Satyrs. That same year his academy exhibition picture, Christ Crowned with Thorns, was selected by a prize-holder of the Art Union Society, and in 1845 his painting Sabrina was engraved for the Art Union. Admiration for Diana and Actaeon at the 1846 Royal Academy exhibition helped secure his election as an ARA that November. He then abandoned portraiture to concentrate on imaginative paintings of mythological and allegorical themes drawn principally from John Milton and Edmund Spenser. Semi-nude female figures dominate these works and attest to Frost's interpolation of live, undraped models with classical statuary. His landscape backgrounds show similar idealization of nature studies, such as those he occasionally exhibited at the Royal Academy and the British Institution. He commanded high prices and found ready patronage among aristocrats and middle-class industrialists alike. Queen Victoria paid £420 for Una among the Fairies and Wood-Nymphs (1847) and subsequently commissioned two more pictures.

This informal drawing shows a rapid sketch of a female model and thumbnail profiles of five artists at work in the schools. The artists include the distinguished animal painter, Abraham Cooper shown wearing spectacles. He was visitor of the Royal Academy Schools in 1845 and was therefore required to attend the life classes and set the model. The other artists include Frost’s friend and mentor, William Etty and the young landscape painters John Mogford and John Clarke Hooke. Drawn in the 1840s, Frost seems to have labelled the artists later, as John Clarke Hooke was not elected an Academician until 1860. This charming study points to the homosocial world of the Royal Academy and the importance of the shared experience of drawing in the life academy.