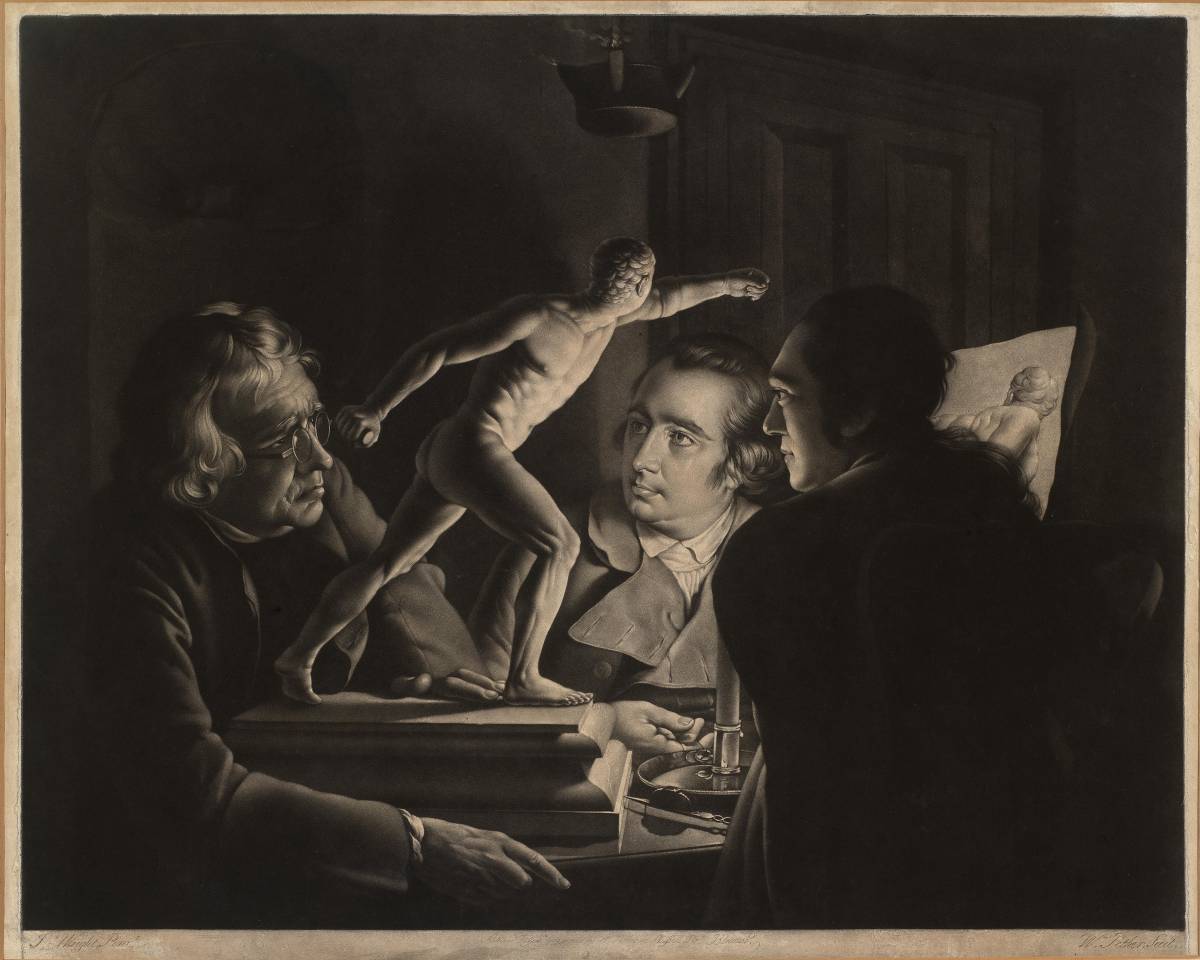 This mezzotint was made by William Pether after Joseph Wright of Derby’s painting, Three persons viewing the Gladiator, which had been exhibited at the Society of Artists in 1765.[1]

The picture depicts three men – traditionally identified as Wright himself, Peter Perez Burdett and John Wilton - comparing a reduced model of the Borghese Gladiator with a black chalk drawing of the same sculpture by candlelight. The choice of subject-matter was one which would have been familiar to eighteenth-century artists and connoisseurs: the viewing of sculpture at night. We know Wright made drawings of the Borghese Gladiator. A study in pen and brown ink on brown paper by Wright survives at Derby, dating from before Wright’s journey to Italy, it seems likely to have been made from a reduced model.[2] Whilst there is no evidence that Wright owned such a model, it seems highly likely that he did, models of the Gladiator appear in numerous artists’ sales during the eighteenth century. As Elizabeth Baker has pointed out such reduced models were also readily available in Derby.[3]

There were perceived artistic benefits for having smaller models. William Hogarth noted in his Apology for Painters: ‘the little casts… if true copies – are still better than the large as the parts are exactly the same [-] the eye [can] comprehend them with most ease and they are more handy to place and turn about.’[4] It therefore seems likely that Wright’s picture depicts an evening viewing of his own cast. Burdett was an amateur draughtsman and printmaker making the comparison between Wright’s own drawing and the model the likely topic of conversation. A theme he develops more fully in An Academy which demonstrates the educational advantages of studying from the Antique for young artists, something which was of great interest to the London trained, but Derby based Wright.

The Gladiator, along with A Philosopher giving a Lecture on the Orrery and A Philosopher shewing an Experiment on the Air Pump, represents one of the most outstanding displays of chiaroscuro to be found in English art or in mezzotint engraving. It was upon works such as these that Joseph Wright of Derby’s lasting fame was built; indeed, William Pether’s mezzotint engraving of this particular subject is widely considered to be one of the finest achievements of mezzotint engraving on copper to have been produced in England. This exceptional early proof impression of this magnificent large mezzotint with the upper half of the inscription space still grey and with the early scratched inscription, before the inscription was strengthened and before the entire title space was burnished clean. In this earliest proof state, the mezzotint burr is totally fresh and the soft copper plate shows absolutely no signs of wear and is printed on antique wove paper with margins beyond the platemark on three sides, trimmed just into the base of the blank title space area at the base of the sheet. The sheet is in remarkably intact condition for an early trial proof mezzotint of this era.