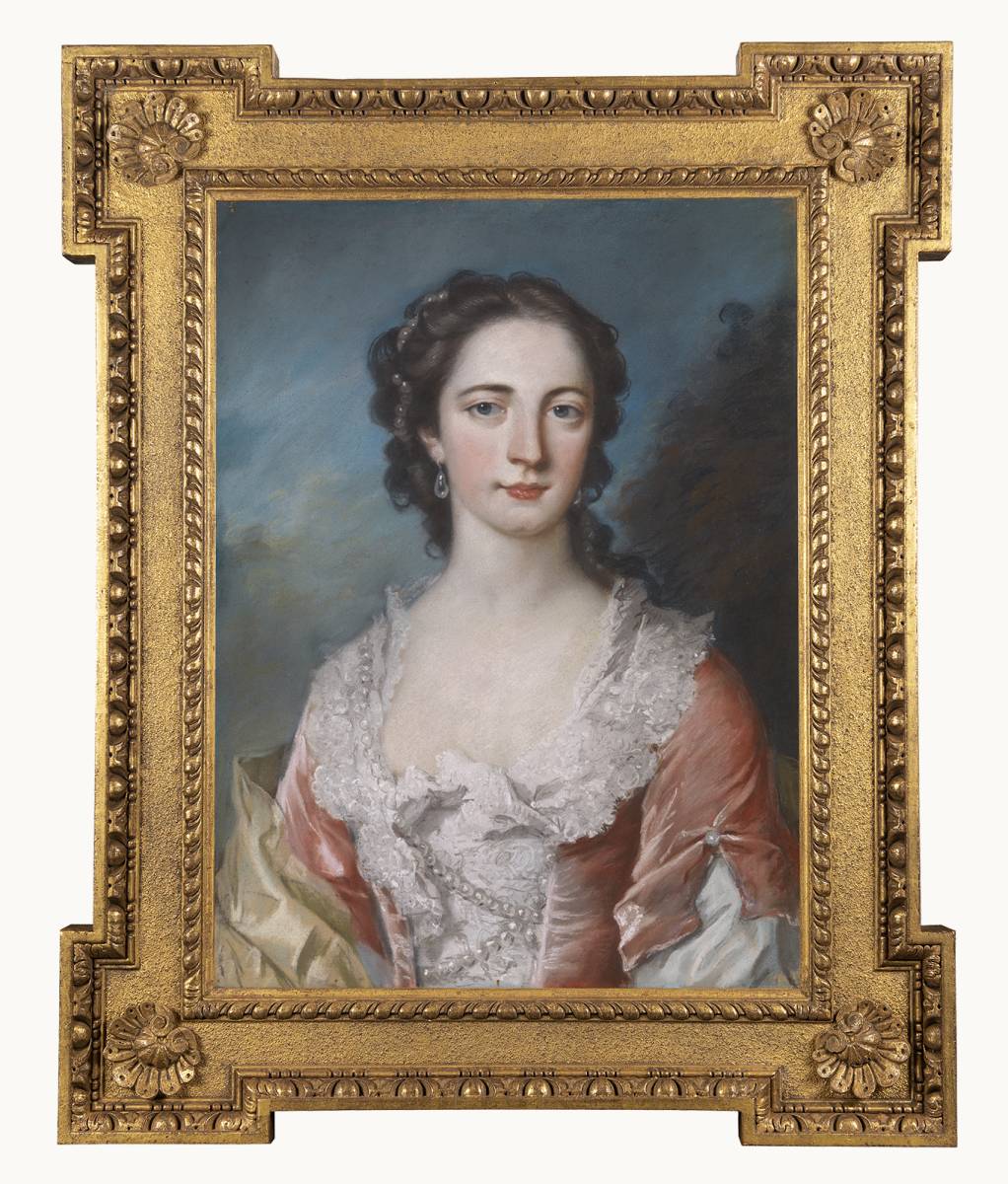 This beautifully preserved example of Hoare’s work demonstrates why he was so in demand by contemporaries and considered the finest exponent of the ‘darling modish study’ of pastel.

Hoare trained in London in the 1720s with the Italian painter Giuseppe Grisoni whom he accompanied to Italy in 1728. In Rome he studied under Francesco Fernandi ‘Imperiali’ at the same time as Pompeo Batoni. As Evelyn Newby pointed out, it was here that Hoare almost certainly encountered the work in pastel of Bernardo Luti. Back in Britain Hoare took the unusual decision to settle in Bath, a decision calculated to capitalise on Bath’s growing position as a resort town. Hoare was at the forefront of the burgeoning fashion for pastel portraits. Pastels had several distinct advantages, they could be worked rapidly in one or two sittings, the lustrous, refractive surface gave them a highly decorative quality, one enhanced by the need to keep them under glass and house them in giltwood frames. George Vertue noted that Hoare charged 5 guineas for a pastel or 8 guineas to have it framed and glazed in 1738; in 1742, he stated that Hoare was responsible for the fashion for pastel portraiture, adding, in 1749 that he ‘has had better success than any other painter there [Bath] before him.’ Hoare’s success prompted other painters to follow him to Bath, making it an alternative centre for the eighteenth-century art world.

The present magnificent portrait, made in pastel on blue paper, stretched over canvas, is typical of Hoare’s mature work. The beautiful, youthful sitter is rendered exquisitely in pastel whilst her lavish costume is handled with a daring freedom, with passages suggestive of oil paint. The present portrait is someone mysterious. It is first recorded at a Christie’s sale in 1923 where it was identified as depicting ‘Lady Norris’, it is not immediately apparent who the sitter is, as no Norris baronets or baronies were extant in the mid-eighteenth century. Its reappearance in 1923 and subsequent acquisition by Sir James Roberts is emblematic of the extraordinary vogue for eighteenth-century British portraiture in the first quarter of the twentieth century. A pretty young woman dressed in lush pink and ivory silks captured in dazzling pastel, this portrait would have appealed to the transatlantic passion for eighteenth-century British portraiture. Roberts was a hugely successful Yorkshire industrialist who built up a substantial collection of British pictures at his house in East Sussex, as well as purchasing and endowing the Brontë Parsonage Museum.