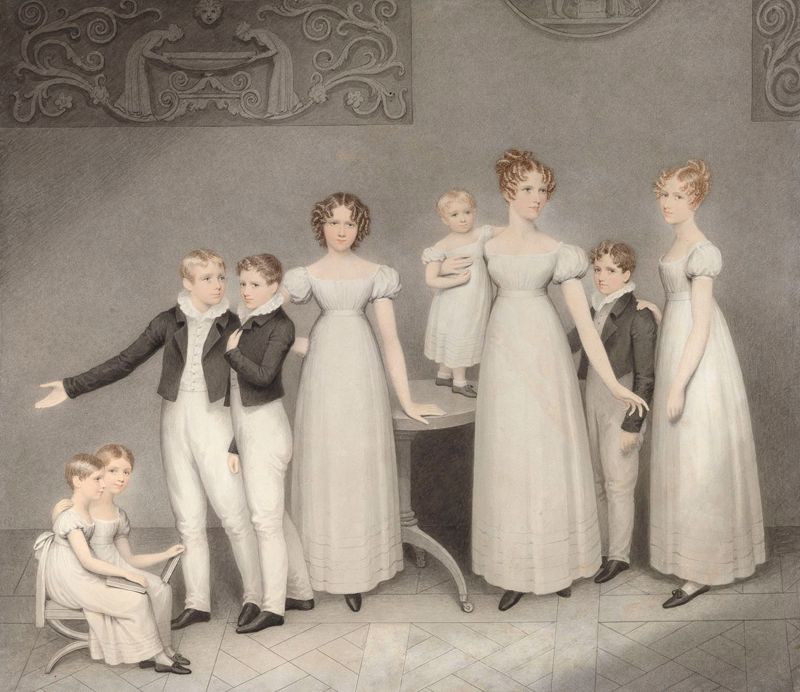 We are pleased to be sponsoring a new show opening at the Ashmolean Museum highlighting the work of the Irish artist Adam Buck (1759-1833). Whilst Buck may not be a household name, he was an imaginative and unusual painter, whose greatest works deserve to be better known. We recently sold a spectacular portrait of The nine youngest children of Richard Bagot, Bishop of Bath and Wells to the Morgan Library and Museum in New York. The drawing, which was executed by Buck towards the end of his career in 1825, is one of his masterpieces displaying a refined neo-classicism which places him amongst European practitioners such as Christian Købke and François-Xavier Fabre.

Born and trained in Dublin, Buck practiced first as a miniaturist before moving to London in 1795 where he worked for a fashionable clientele, which included George IV and the Duke of York. His elegant and spare portrait drawings were in great demand and he was a prolific exhibitor at the Royal Academy between 1795 and 1833. As well as portraiture, Buck also produced a large number of fashion plates, decorative compositions of loosely allegorical subject-matter, such as Faith, Hope and Charity. His subsequent reputation has largely rested on the proliferation of these prints and their use as designs in fan and on transfer-printed porcelain. But Buck was a committed and intelligent interpreter of ancient Greek forms, something apparent in the strength of design in his portrait of the Bagot children.

The seriousness with which he engaged with the antique led Anthony Pasquin to observe: ‘he appears to study the antique more rigorously than any of our emerging artists and by that means he will imbibe a chastity of thinking, which may eventually lead him to the personification of apparent beauty.’ (A. Pasquin, An Authentic history of the professors of painting, sculpture, and architecture who have practiced in Ireland … to which are added, Memoirs of the royal academicians, 1796, p.41). In London he not only studied and collected the newly fashionable Greek vases, in 1811 he published a prospectus for a book on vase painting: Proposals for publishing by subscription 100 engravings from paintings on Greek vases which have never been published, drawn and etched by Adam Buck from private collections now in England. The publication was intended as a continuation of Sir William Hamilton’s Collection of Engravings from Ancient Vases (1791-7). Buck painted a fine self-portrait with his family in 1813, which is now in the Yale Center for British Art, including nine of the Greek vases he planned to engrave. Long thought to depict the collector and pioneering designer Thomas Hope and his family, Ian Jenkins established the identities of the sitters in 1988 re-establishing Buck as one of the pioneers of neo-Greek taste in the first quarter of the nineteenth-century. (I. Jenkin, ‘Adam Buck and the Vogue for Greek Vases’, The Burlington Magazine, vol.130, no.1023, June, 1988, pp.448-457).

Buck’s previously unrecorded portrait of the nine eldest children is signed and dated 1825. The three eldest daughters are shown standing, dressed à la grecque in white muslin dresses wearing fashionable ringlets, the three eldest boys in matching costume and the three youngest, not yet breached, in dresses. There are obvious compositional similarities with the Yale self-portrait; Buck uses an identical geometric floor to render the frieze of figures realistically in space. Behind the children, three antique reliefs are arranged – similar in tone to the Greek vases – adding both a sense of antiquarian grandeur and decorative contrast to the restrained figures. Buck’s continuing interest in the power of Attic decoration is seen in the poses of the children themselves, which recall the emphatic outlines of Greek vase decoration. With its, economy of form and reduced palette – all the colour seen in the Yale self-portrait has been reduced to monochrome - this is Buck’s most sustained and ambitious essay in neo-Greek classicism.