We are excited to be showing at the Winter Show again this year. We have put together an exciting group of new acquisitions. Amongst our highlights are a beautiful, unfinished oil study by Joshua Reynolds which demonstrates his technical virtuosity. A group of remarkable works made by one of the most extraordinary outsider artists of the nineteenth century, John Bingley Garland. Garland, a leading figure in the trans-Atlantic salt-cod trade spent some years in Canada where he played a significant role in political and civic life before returning to England. In his retirement he createdhe created a sequence of exceptional collages, combining old master engravings, botanical prints and passages of spiritual poetry he then covered with drips of blood drawn in red India ink. But we are most excited to be bringing a remarkable bust of George Washington. 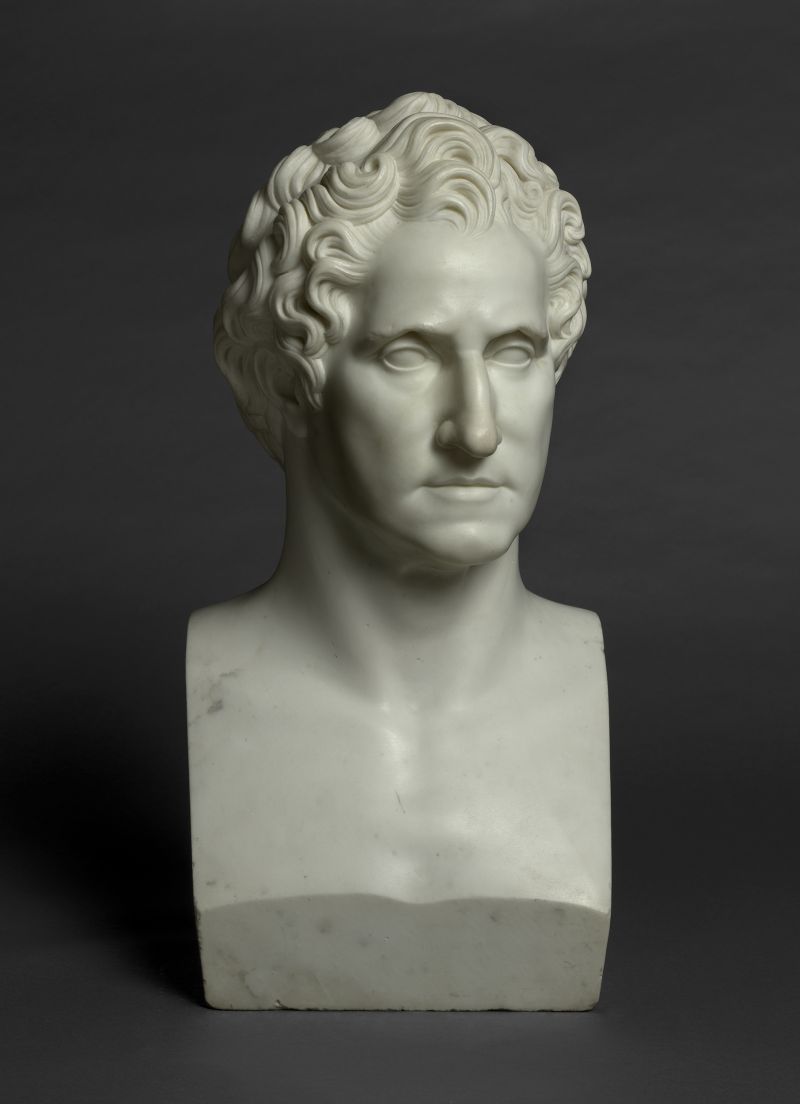 Carved in 1816 in Italy, the bust reproduces a model of Washington made from the life by Giuseppe Ceracchi in 1791. This powerful, classical herm is the result of a fascinating series of events: the Italian sculptor Ceracchi visited America fired with enthusiasm for the newly independent nation, he hoped to complete an elaborate monument to the Republic. Ultimately there was little public interest and no funds to complete such a project, but during his two periods of residence in the United States, Ceracchi persuaded many of the leading figures of the American Revolution to sit to him, busts survive of amongst others: Benjamin Franklin (Pennsylvania Academy of Fine Arts), John Jay (Supreme Court, Washington, DC), Thomas Jefferson (Monticello), George Clinton (New York Historical Society), Alexander Hamilton (Crystal Bridges Museum of American Art) and George Washington. Ceracchi retained the ad vivum terracotta of Washington – and the plaster model which had been used to make his only marble version (Metropolitan Museum of Art)- returning to Europe with them in 1794. As early as July 1804, Thomas Jefferson, then the third President of the United States, was corresponding with the American consul at Livorno, Thomas Appleton, keen to secure: ‘the original plaister bust of Genl. Washington from the Sculptor.’ But Jefferson was too late, Ceracchi had already been executed in Paris for his part in a coup against Napoleon. The enterprising Appleton tracked down the model in Bordeaux and commissioned a series of marble replicas from a sculptor in Carrara, Massimiliano Ravenna. Four of these he sold to Tobias Lear, formerly George Washington’s personal secretary. It seems highly likely that this bust is identifiable as one of the four dispatched in 1816 by Appleby to Lear. As such, this bust represents an early and important piece of Washington’s iconography it also offers powerful evidence for the American market for Italian sculpture in the first decades of the nineteenth century.