We are excited to be preparing for Frieze Masters in London, the first ‘in person’ fair we will have participated in since March 2020. We have an exciting group of works we will be exhibiting, amongst the highlights is a truly exceptional painting. Depicting Napoleon’s brother, Lucien Bonaparte, Prince of Canino and his mistress Alexandrine de Bleschamp is one of the most unexpectedly intimate and erotically charged portraits painted in Revolutionary France. It was painted in around 1802 by Guillaume Lethière, Lucien Bonaparte’s protégé, who had been born on the Caribbean Island of Guadeloupe, the son of a white government official and a freed black slave. 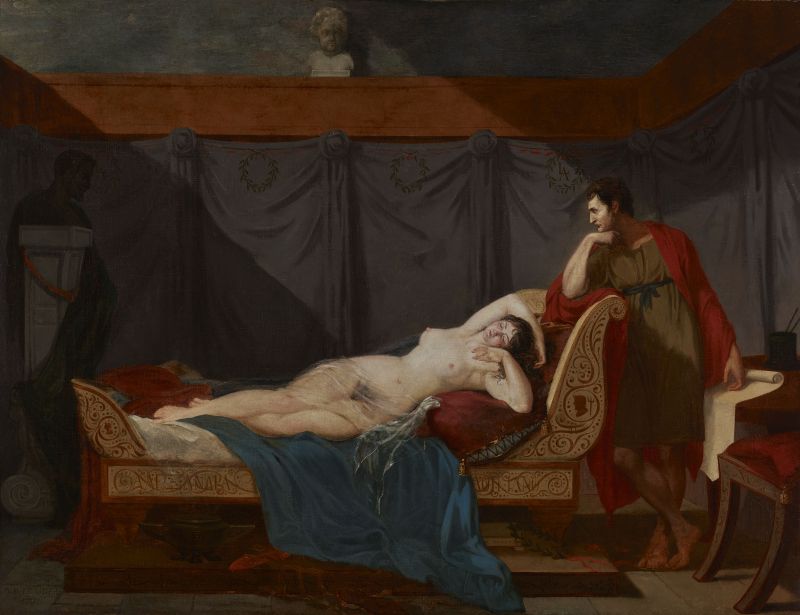 Trained in Rouen, Paris and Rome, Lethière absorbed influences from a range of artists from Grabriel François Doyen to Jacques Louis David and his work is correspondingly considered to sit at the heart of a complex international network of neoclassicism. At first sight, Lethière has created a composition that appears to emanate from the modish repertoire of David and his followers: the frieze-like composition appears to show a figure from Roman literature contemplating the nude form of Venus. The details of the interior resemble a fantasy of Republic French neoclassicism: a fabric lined chamber furnished with an antique couch, busts, incense burner and chair. But Lethière’s painting contains a series of clues which unlock its startling iconography: he adds the names of Alexandrine and Lucien, in Greek to the couch and their initials to the wall hangings. Lethière accompanied Lucien on his diplomatic mission to Spain in 1800 where they were afforded a rare sight of Francisco Goya’s exceptional depiction of a modern naked woman, the Nude Maja, which then belonged to Spain’s Prime Minister Manuel de Godoy. Lethière’s depiction of Lucien and his mistress painted in 1802 is therefore an exceptional contemporary response to Goya’s bold image. But unlike Goya’s anonymous model, here Lethière shows Alexandrine Jouberthon, naked, save for a wisp of diaphanous drapery, a conceit which serves to accentuate her pubic hair. The Roman figure contemplating her nakedness, shown in severe profile, is Lucien himself and the smiling bust high above them is recognisable as a self-portrait of Lethière. Given the renewed focus on the diversity of museum collections, we are excited to be showing a major masterpiece by one of the first mixed race painters to find success in Europe.