We are delighted to announce the publication of our latest catalogue. You can download a PDF here. Sourcing and researching works which appear in our catalogues is a highly rewarding process which always throws up exciting and fascinating new discoveries: for example, the remarkable, if somewhat unsettling, drawing by Thomas Rowlandson of a gibbet. When we acquired the sheet, we assumed was a generic scene, but further research established that it records a gibbet on the Isle of Dogs.

The drawing offers stark evidence for the prominence of capital punishment in Georgian Britain where over two hundred capital offences were on the statute books. Rowlandson’s watercolour shows four corpses exposed on one of the gibbets that lined the upper reaches of the Thames. Rowlandson has included spectators, both on the shore and in a small boat, underscoring the fact that the bodies of criminals formed an ever-present spectacle in eighteenth-century London. This watercolour is an exceptionally rare contemporary depiction of a gibbet, one of a small group that Rowlandson made towards the end of the century.

A further watercolour by Rowlandson depicting the same structure is inscribed ‘Pirates hanging at the Isle of Dogs’ confirming that the present work depicts a gibbet on the Thames. The Admiralty Courts dealt with capital crimes committed at sea - murder, mutiny or piracy - most executions were carried out in London at Execution Dock, and the body then moved to be displayed in a gibbet. The account of Captain James Lowry’s execution in 1752 mentions that his body was conveyed by boat from the scaffold at Execution Dock to Galleons Reach, north of Woolwich where he was to be hung in chains. The famous pirates John Gow and James Williams were displayed at Gray’s and Blackwall.

Rowlandson’s watercolour seems likely to show a stretch of the river east of Greenwich where gibbets formed iconic landmarks. John Rocque’s 1746 map of London shows gibbets along the river and William Hogarth, in his depiction of the Idle Apprentice's departure from London to become a seaman, shows a boat being rowed down Limehouse Reach with a hanged man on the Isle of Dogs visible in the background. A late-eighteenth-century Thames guidebook mentions three gibbets in Blackwall Reach 'upon which have been hung persons who have committed murders on the high seas.’ As Peter King has established bodies were exposed for an average of twenty years, the purpose to assert the authority and jurisdiction of the Admiralty Court to sailors as they left London. As King writes: ‘Given that London was the key port of the empire in the eighteenth century and that huge numbers of sailors therefore passed up the Thames each year, the assembly of gibbets that they saw each time they visited the port gave substance and immediacy to the power of the Admiralty Court and the fiscal/military state whose interest it guarded.’ 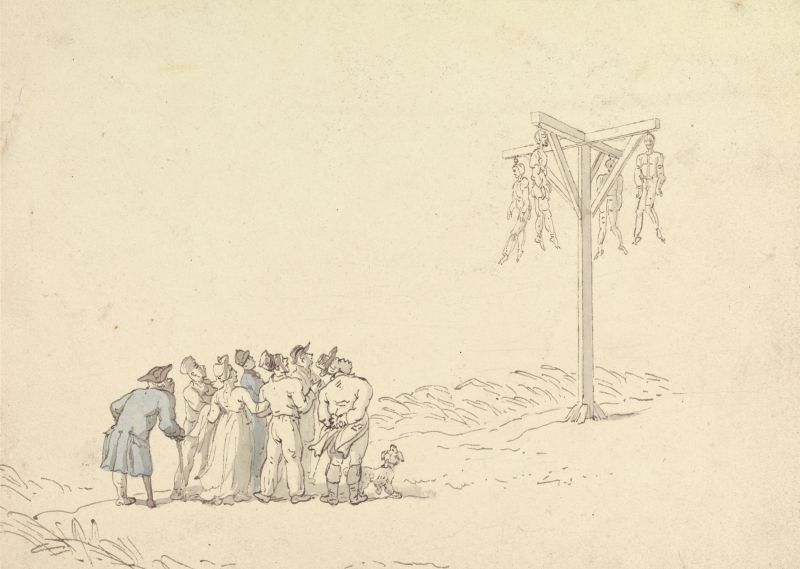 Rowlandson’s watercolour is clearly based on close observation of an actual gibbet, he reuses the structure in a watercolour now at the Yale Center for British Art which focuses on the crowd of spectators. For Rowlandson, as for many Londoners, the gibbets were not objects of criticism, but a site of macabre tourism, affording Rowlandson an opportunity to satirise the crowd. As such, our drawing is a rare and important depiction of one of eighteenth-century London’s documented gibbets.