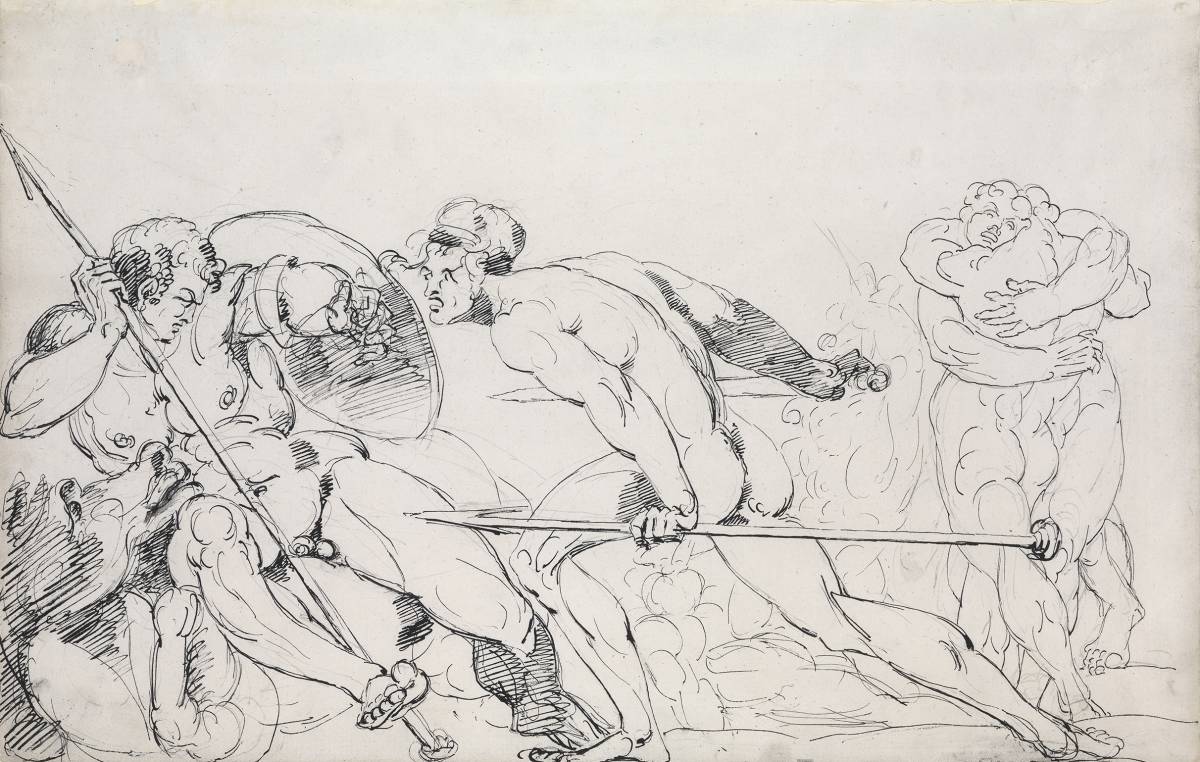 This drawing is a previously unpublished sheet from an album made in Rome in the late 1770s. The album has stimulated periodic debate amongst scholars over the last forty years but the majority of sheets are now securely attributed to James Jefferys. This fluidly worked sheet depicts a particularly dynamic battle scene, the pen work characteristic of Jefferys’ handling of figures in motion. In its bold linearity, outstanding state of preservation and remarkably immediate composition, this drawing encapsulates Jefferys’ work and a peculiarly fertile moment of European art which saw the neoclassicism of Mengs metamorphose into the restless harbinger of William Blake’s romanticism.

This drawing was part of an album of drawings initially attributed to an unknown hand who was dramatically christened by Roland, Browse and Delbanco ‘The Master of the Giants’ on account of the colossal, heroic figures with attenuated limbs which characterise the majority of the sheets. Comprising some twenty large sheets and a similar number of smaller sheets, they were first exhibited in London in 1949. Clearly made in Rome and demonstrating a close interest in sculpture as well as Italian printmaking, they were identified as having emanated from the international circle of artists who worked close to the Swiss painter Henry Fuseli. It was Nancy Pressly who first noted the similarity of some of the works formerly contained in the Roland, Browse and Delbanco album with the surviving documented drawings of the British history painter, James Jefferys.[1]

Born in Maidstone, the son of a portraitist and coach builder, James Jefferys was apprenticed to the celebrated London engraver William Woollett in 1771 and attended classes at the Royal Academy Schools between 1772 and 1775. At Woollett’s studio he met the historical painter, draftsman, and print maker John Hamilton Mortimer, who would become an important role model. Jefferys exhibited historical drawings at the Royal Academy and the Society of Arts and in 1774 was awarded the Society’s gold palette for his drawing, Deluge. The following year, Jefferys won one of the first travelling scholarships awarded by the Society of Dilettanti, which enabled him to study in Rome for three years. Soon after Jefferys’ arrival in Rome, on 7 October 1775, the painter and art dealer Alexander Day mentioned in a letter to Ozias Humphry that he had seen a drawing by the young artist, which ‘had infinite merit.’ Jefferys’ name appears sporadically in the standard Grand Tour sources, for example, he was listed as an ‘Old London Acquaintance’ by Thomas Jones, who met him in the Caffè degli Inglese in November 1776. As William Pressly has pointed out ‘Jefferys’ mental state may well have been precarious.’[2] In 1779 Elizabeth Banks, wife of the sculptor, Thomas Banks recorded an anecdote of Jefferys’ extreme behaviour. Jefferys and the Swedish sculptor Johan Tobias Sergel had been in competition for the same woman, Jefferys followed her and confronted her in the street: ‘having a brace of Pistols in his pocket, he gave her one, & after some altercation, told her she must kill him, or he would her.’[3]

Jefferys’ surviving Roman drawings show a similar volatility. Whilst highly indebted to Henry Fuseli, the sheets from the Roland, Browse and Delbanco album are, as William Pressly has noted: ‘extreme in their distortions, going beyond even Fuseli’s boldest work.’[4] Fuseli had arrived in Rome in 1770 and shortly afterwards he began to produce highly inventive interpretations of literary subjects, particularly Shakespearean. Along with the sculptors Sergel and Banks, Fuseli found in the prescribed diet of Michelangelo and the antique, not classical harmony but vast, swollen heroic bodies engaged in violent actions, ingredients he recast to form a distinctive visual language.

As with so many of Fuseli’s boldest drawings, the present sheet shows grand, muscular figures in violent action. The taught physique of the figure on the far left, with its rippling torso captures the dramatically overblown qualities of late Roman sculpture that Fuseli so admired. As with so many of Fuseli’s drawings, the literary source of the sheet is not immediately apparent. Although all the figures are naked, it may well be a depiction of a Shakespearean subject. William Pressly has identified many of the subjects depicted in the Roland, Browse and Delbanco album as being Shakespearean in origin.[5] The prominent horses head in the bottom left of the drawing points to a depiction of the death of King Richard III from the last act of Shakespeare’s play. In the midst of the Battle of Bosworth King Richard is deserted by Lord Stanley, his horse is killed from under him (prompting the famous declaration ‘a horse, a horse, my kingdom for a horse!’) and at the same moment fatally challenged by the Duke of Richmond, later Henry VII. Jefferys depicts Richard as the classic anti-hero, a convention that was repeated in the works of Fuseli, Nicolai Abildgaard and William Blake, all of whom depicted scenes from Shakespeare’s play. 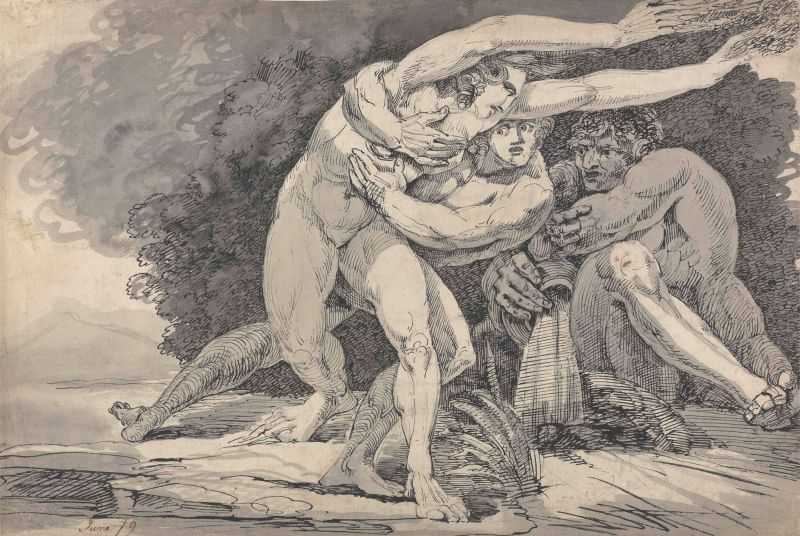