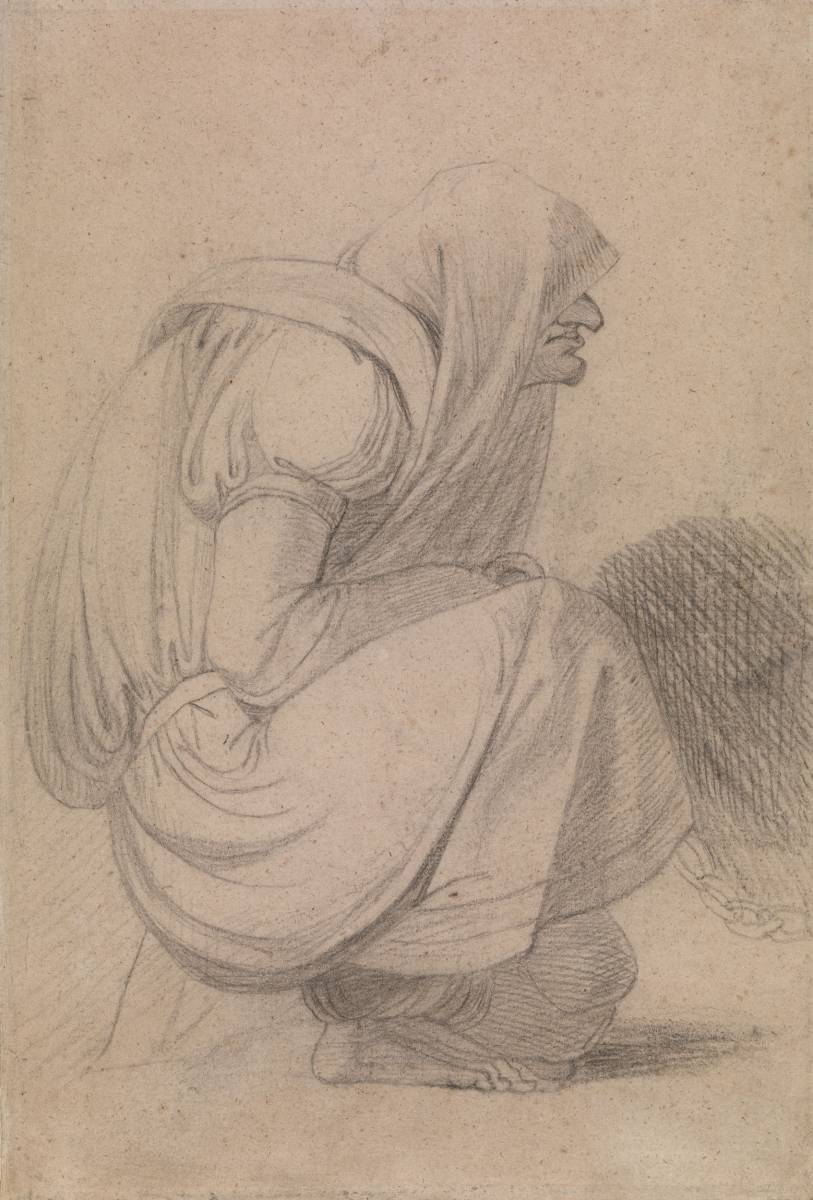 This boldly drawn sheet depicting a seated figure was made by Fuseli at an important and highly productive moment in his career. The monumental drawing is closely related to another sheet by Fuseli in the British Museum which Schiff published as subject unknown.[1] Both drawings were made when Fuseli was designing his most important sequence of historical works, including scenes from Shakespeare and Milton, The Nightmare and The Death of Dido which was exhibited at the Royal Academy to great critical acclaim in 1781. The present drawing does not relate directly to any of Fuseli’s finished historical paintings of the period, but evidently the image of a slightly menacing, seated and covered old woman was precisely the sort of motif he was playing with. It is notable that the same figure reappears later in Fuseli’s work as the witch from Ben Jonson’s Witch’s Song which Fuseli produced as both a painting and engraving in 1812.

Fuseli returned to London in 1779 from a highly creative and productive period in Rome and established himself as one of the leading history painters of the period. Fuseli re-established contact with his old mentor Sir Joshua Reynolds, becoming a regular guest at his dinner table and visitor to his studio. The earliest and most striking manifestation of this strategy was Fuseli's Death of Dido, exhibited in 1781 at the Royal Academy. Executed on the same scale as Reynolds's version (Royal Collection), Fuseli's vertically oriented picture was hung directly opposite Reynolds's with its horizontal orientation, inevitably inviting comparison between the two works and garnering Fuseli much publicity and favourable reviews in the newspapers.

The present, previously unpublished sheet, relates closely to a drawing now in the British Museum. That sheet shows the same seated old woman, drawn on a smaller scale and more schematic in design, seated next to an anatomical drawing of a man. The pose of this figure is related to the pose of Dido in his Death of Dido; the foreshortened torso, arrangement of head, oblique view of Dido’s features and arms all suggest that the study can be viewed as an initial thought for the composition. Fuseli may have initially thought of including the figure of the hunched and covered old woman. Drawn on identical paper to the British Museum sheet, our study is an enlarged depiction of the same figure, more elaborately delineated and developed. The presence of a chain to the right of the figure, suggests that the iconography was related in some way to a scene of imprisonment.

Fuseli had first explored the motif of the hooded old woman in an early Roman drawing, The Venus Seller.[2] The idea of a grotesque old woman, hooded and with angular nose and projecting chin seen in profile was most spectacularly used by Fuseli in his sequence of paintings depicting The Three Witches from Macbeth.[3] Fuseli seems to have kept the present sheet and may have returned to it when preparing a painting of The Witch and the Mandrake from Ben Jonson’s Witch’s Song from his Masque of Queens in 1812.[4] Here the same seated figure looks out from under her hood and picks a mandrake by moonlight. Jonson’s drama had been performed at the court of James I in 1609, inspired the subject. To throw the nobility of the queens into relief, the poet added a coven of witches, one of whom declares: ‘I last night lay all alone, On the ground, to hear the mandrake groan;  And plucked him up, though he grew full low, And, as I had done, the cock did crow.’ The figure was reversed in the associated etching which was published in 1812.[5] It seems likely that the present drawing remained as part of Fuseli’s working archive of figure studies.

The present drawing was presumably purchased with the bulk of Fuseli’s drawings after the artist’s death by Sir Thomas Lawrence. Lawrence’s large group of Fuseli drawings were then acquired by Susan, Countess of Guildford (1771-1837). Lady Guildford was the eldest daughter of the banker Thomas Coutts (1735-1822), who himself had supported Fuseli’s journey to Rome in the 1770s and had remained one of the artist’s key patrons.  In 1796 Susan married George, 3rd Earl of Guildford, whose father was Prime Minister of Great Britain between 1770 and 1782.  She was a close friend of Fuseli and during her lifetime assembled a large and important collection of his work.