John Brett was a committed Pre-Raphaelite, producing some of the most intensely felt and scrupulously observed landscapes of the mid-nineteenth century; whilst not a member of the Brotherhood, his paintings from the 1850s demonstrate some of the purest expression of the movement’s ideals. This portrait of Brett's brother, Arthur, was painted between October 1858 and March 1859 whilst Brett was at work on his most ambitious early landscape, Val d'Aosta, painted under the direct instruction of John Ruskin, its first owner. As such, this remarkable portrait is a rare example of Pre-Raphaelite portraiture made at the height of Brett's engagement with the movement. Unlike his landscapes, which were criticised for their mechanical verisimilitude, Brett's small, cropped canvas demonstrates his extraordinary technical virtuosity, as well as, his visual inventiveness. 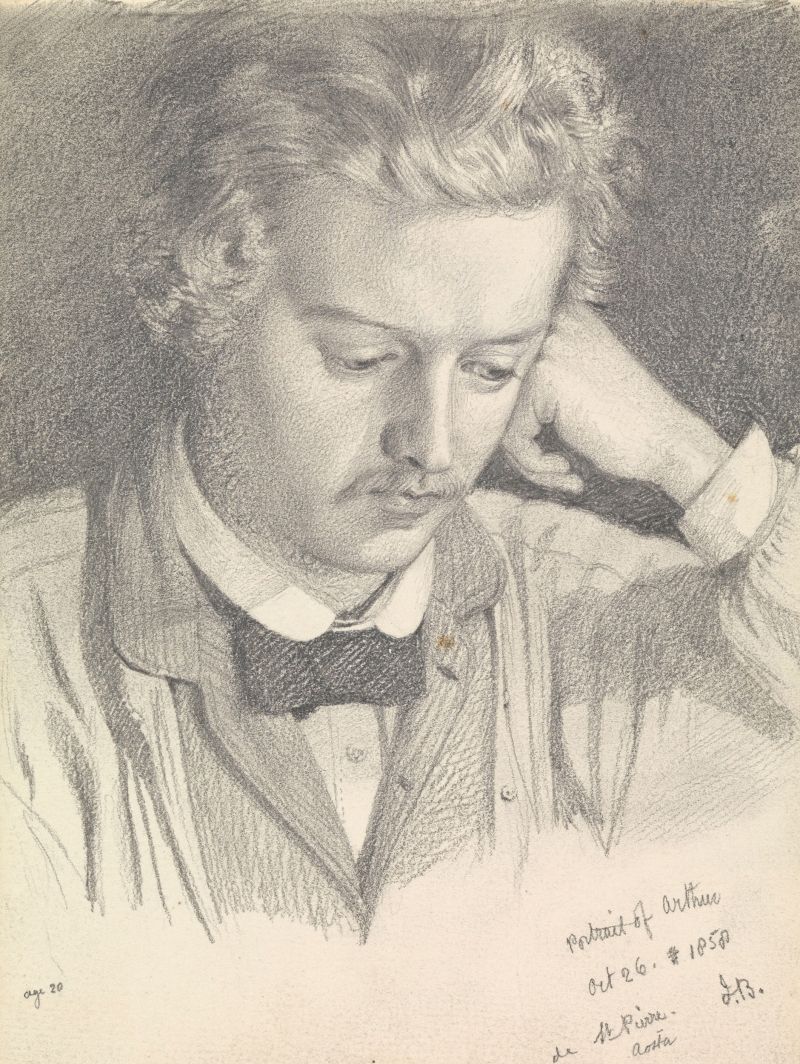 John Brett was the son of a veterinarian surgeon in the army, initially intended for an army career, he instead became a pupil of the painter James Duffield Harding in 1851 and also took lessons from the painter Richard Redgrave. Thanks to a connection of his aunt, Eliza Orme, Brett was brought into contact with a circle of writers and painters which included all the leading Pre-Raphaelites and in the winter of 1852 Brett was introduced to William Holman Hunt, at the house of Eliza Orme's sister and brother-in-law, the celebrated poet and critic Coventry Patmore. Shortly afterwards, Brett entered the Royal Academy Schools. His early artistic inclination was recorded in his diary which he kept throughout the 1850s, in an entry for 18 May 1853:

'I am going on fast towards Preraphaelitism—Millais and Hunt are truly fine fellows. I greatly admire and honor them—Have resolved in future to go through severe course of training and close childlike study of nature. In short to follow their steps.'[1]

Brett made his professional début at the Royal Academy in 1856, exhibiting a portrait of Mrs Coventry Patmore (Ashmolean Museum, Oxford). The portrait followed the Pre-Raphaelite formula of strict truth to nature, resisting all temptation to idealise. During the second half of the 1850s he became a familiar figure within the Pre-Raphaelite circle, exhibiting with them and in 1858 joining the Hogarth Club. Among the fine portrait drawings that Brett made of fellow Pre-Raphaelite artists are one of Arthur Hughes, of 1858 now in the National Portrait Gallery, London and another of Alexander Munro, of 1861, in a private collection. Over a period of about two years, from 1856, Brett seems to have been romantically inclined towards the poet Christina Rossetti, and it is possible that he sought to marry her but was rejected. An unfinished portrait of Christina Rossetti made by Brett in 1857 survives, worked like a miniature on a white ground, the unsettling image shows Rossetti posed against a background of a giant, minutely observed feather. It has been suggested that the curious out-sized feather was a response to Ruskin's injunction to study Albrecht Dürer, in 1857 Brett drew a self-portrait which channels the intensity of Dürer's own self-portraiture and is, perhaps tellingly, inscribed in German: 'mein selbst (ganz wahr)' - 'my self (quite true).'[2] 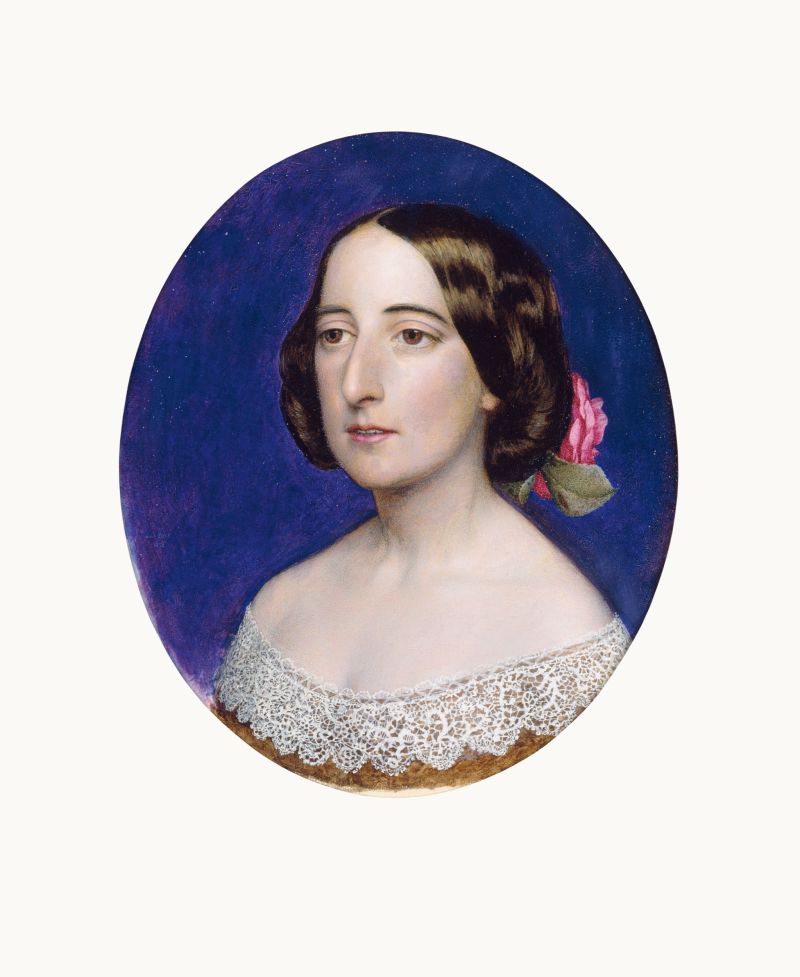 The fourth volume of Ruskin's Modern Painters (subtitled 'Of mountain beauty') was issued in April 1856; Brett was so struck by what he read that he 'rushed off to Switzerland in obedience to a passion that possessed me and wd listen to no hindering remonstrance.' In the summer of 1856 Brett worked on his first great landscape, The Glacier of Rosenlaui now in the collection of the Tate, London. It was greatly admired by Dante Gabriel Rossetti, who, in turn took it to show Ruskin. In 1857 two watercolours by Brett were included in the first Pre-Raphaelite group exhibition, held at 4 Russell Place, Fitzroy Square, and they were favourably reviewed by Patmore, who commended the 'wonders of laborious and effective finish.' Some of Brett's works - including The Glacier of Rosenlaui - also went with other Pre-Raphaelite paintings to New York, Philadelphia and Boston between October 1857 and June 1858.

Brett's next exhibition work, The Stonebreaker, now in the Walker Art Gallery, Liverpool was particularly praised by Ruskin who noted in Academy Notes, that: 'in some points of precision it goes beyond anything the Pre-Raphaelites have done yet.' As a result, Ruskin became particularly occupied with Brett and his work, believing him to have the technical skill to be able to fulfil his latest ideas about landscape painting. The result was Val d'Aosta (Private collection, UK) which shows a westward view from the Château St Pierre near Villeneuve along the valley of the River Dora Baltea, with Mont Paramont in the distance. Ruskin visited Brett while he was working on the painting, subjecting him to intensive instruction in his own principles of landscape painting. Whilst Brett was at work, his brother, Arthur Brett, visited and Brett made several intense portrait studies of his younger brother. In his Chamouni/Val D'Aosta sketchbook, now in the National Maritime Museum, London, Brett made one of Arthur in profile and another of his brother front-on, leaning on his fist and looking down. In both, Arthur Brett is wearing the same coat as the current portrait and it seems likely that our painting was conceived during their time together at the Château St Pierre. 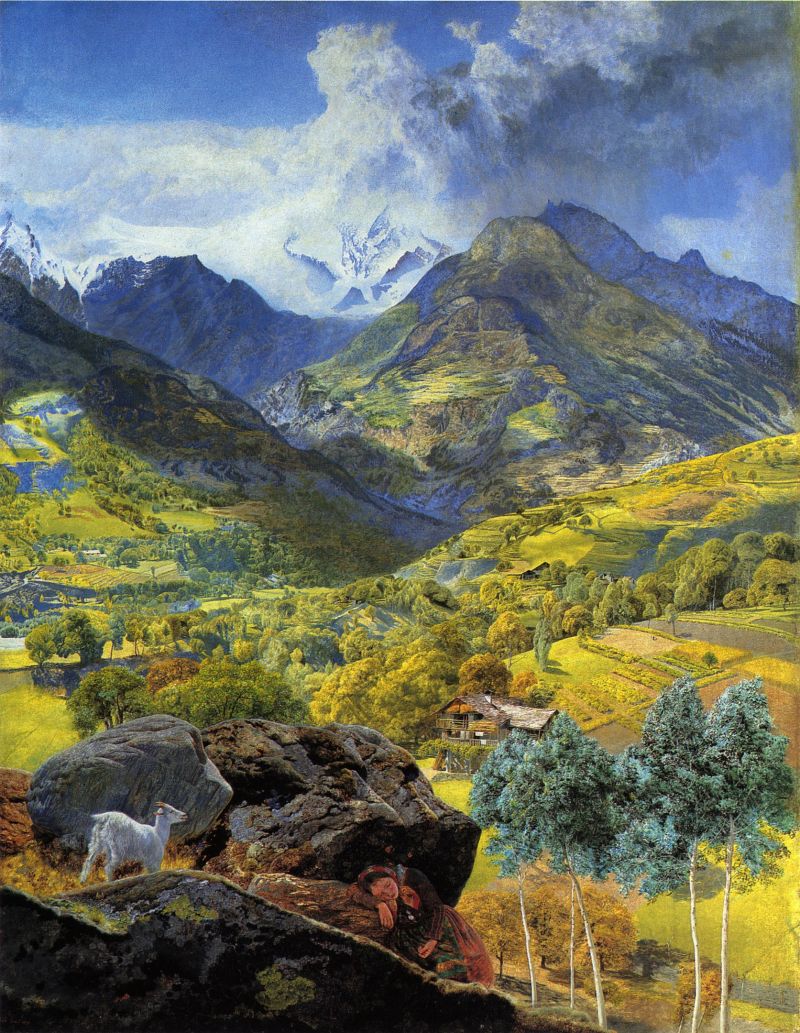 John had shared lodgings with his brother in London between 1853 and 1854, when Arthur was studying music, in hope of having a career as a pianist. By 1858 he had decided to follow his father into the army instead. Brett noted in his diary on Christmas Day 1858:

'I long to see him a real knight seeking adventures the other side of the world, to see all his dreams realized: I would think it enough pleasure for a life... to help the bringing about of them and eyes to see it.'[3]

In this intense portrait, Brett captures the longing of this sentiment. He places his brother against a heraldic backdrop of lions passant guardant, an allusion to the Royal Arms of England and shows the young man on the brink of an active life. Brett had experimented with using daguerreotypes in producing his portraits but was frustrated with the results, instead he relied on obsessive, forensic observation. As a result, Brett's portrait of his youthful, 20 year old brother displays no hint of idealisation, the mottled skin of his chin, the pale translucence of his blond complexion and the minute delineation of his facial hair are observed with a Ruskinian intensity which survives in this exceptionally well-preserved canvas. Brett has revelled in the power of simple observation: Arthur's limpid grey/blue eyes show a reflection of the studio window and the pose, the opening of the starched shirt-front where one stud is missing. In this Pre-Raphaelite portrait, all pictorial devices have been eschewed, Brett eliminates signs of an interior, instead cropping the composition to simply show Arthur Brett, propped up against the heraldic backdrop. In a sense, it is one of the purest statements of Brett's identification with Pre-Raphaelite ideals, he has approached his brother as if he were gneiss and scree on a Swiss glacier.

Christiana Payne has suggested that, in his choice of background, Brett may have been consciously evoking his brother's namesake, King Arthur, who had recently been celebrated in Tennyson's Idylls of the King. There is in the portrait the suggestion of the second generation of Pre-Raphaelite paintings an interest in the heroism of the Middle Ages: Arthur Brett 'a real knight seeking adventures.'