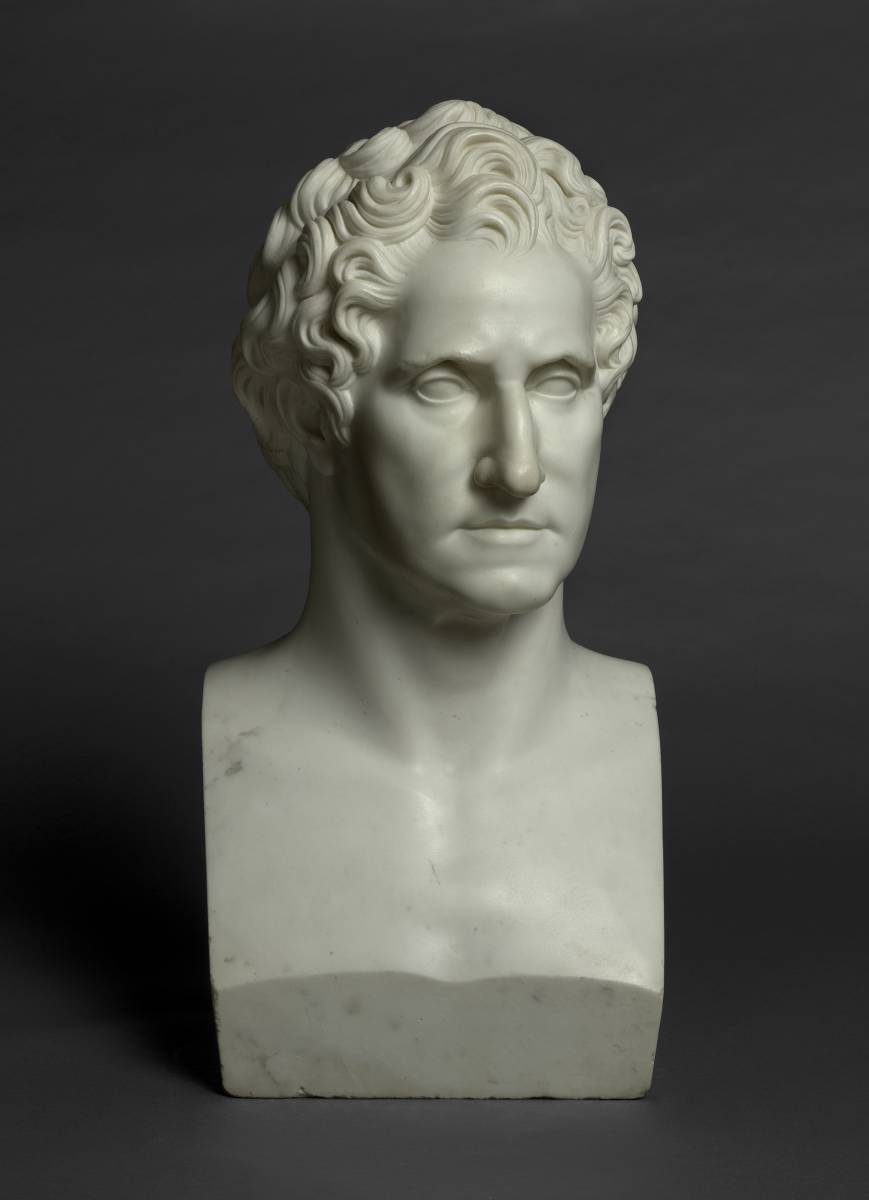 This striking marble bust depicts George Washington, carved in 1816 in Italy, the bust reproduces a model of Washington made from the life by Giuseppe Ceracchi in 1791. This powerful, classical herm is the result of a fascinating series of events: the Italian sculptor Ceracchi visited America fired with enthusiasm for the newly independent nation, he hoped to complete an elaborate monument to the Republic. Ultimately there was little public interest and no funds to complete such a project, but during his two periods of residence in the United States, Ceracchi persuaded many of the leading figures of the American Revolution to sit to him, busts survive of amongst others: Benjamin Franklin (Pennsylvania Academy of Fine Arts), John Jay (Supreme Court, Washington, DC), Thomas Jefferson (Monticello), George Clinton (New York Historical Society), Alexander Hamilton (Crystal Bridges Museum of American Art) and George Washington. Ceracchi retained the ad vivum terracotta of Washington – and the plaster model which had been used to make his only marble version (Metropolitan Museum of Art)- returning to Europe with them in 1794. As early as July 1804, Thomas Jefferson, then the third President of the United States, was corresponding with the American consul at Livorno, Thomas Appleton, keen to secure: ‘the original plaister bust of Genl. Washington from the Sculptor.’[1] But Jefferson was too late, Ceracchi had already been executed in Paris for his part in a coup against Napoleon. The enterprising Appleton tracked down the model in Bordeaux and commissioned a series of marble replicas from a sculptor in Carrara, Massimiliano Ravenna. Four of these he sold to Tobias Lear, formerly George Washington’s personal secretary. It seems highly likely that this bust is identifiable as one of the four dispatched in 1816 by Appleby to Lear. As such, this bust represents an early and important piece of Washington’s iconography it also offers powerful evidence for the American market for Italian sculpture in the first decades of the nineteenth century. 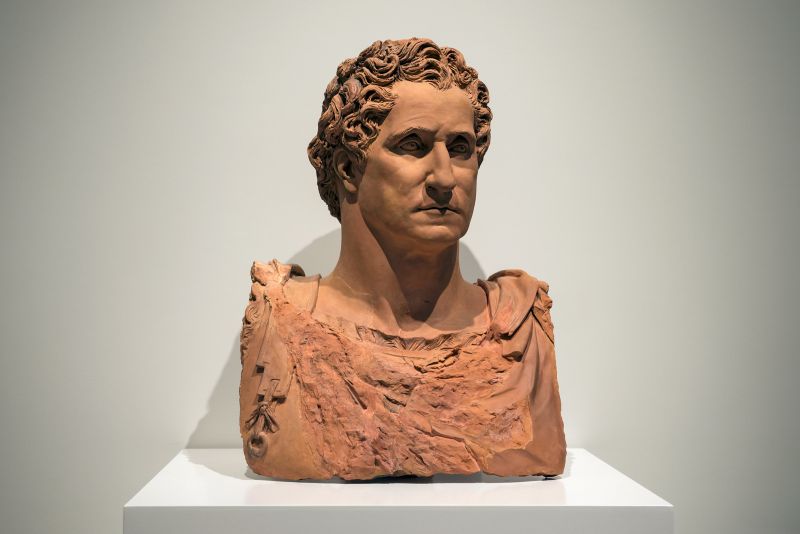 Giuseppe Ceracchi trained in Rome with Tommaso Righi, then continued his studies at the Accademia di San Luca. In 1773 he travelled to London to work with Agostino Carlini, a founding member of the Royal Academy. Ceracchi exhibited busts at the Royal Academy in the late 1770s and modelled architectural ornament and bas-relief panels for Robert Adam. In 1778 Ceracchi sculpted the statues of Temperance and Fortitude cast in Portland stone for Strand façade of Sir William Chambers’ Somerset House, London. Ceracchi returned to Rome in 1781 where he befriended Johnann Wolfgang von Goethe who had rooms in the same house on the Corso. 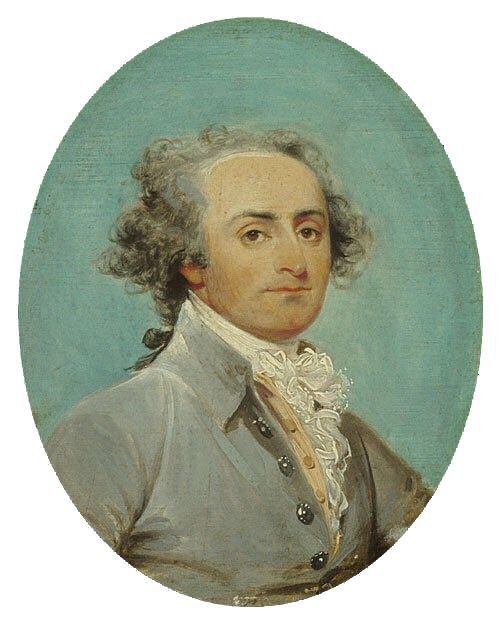 It was whilst in Rome that Ceracchi heard of the resolution passed by the Continental Congress: ‘that an equestrian statue of General Washington be erected at the place where the residence of Congress shall be established… in honor of George Washington, the illustrious commander-in-chief of the armies [of the United States of America], during the war which vindicated and secured their liberty, sovereignty, and independence.’[2]

In 1791 Ceracchi travelled to America bent on competing for the monument. In July he sent a description of his proposed monument to the then Secretary of State Thomas Jefferson, assuring Jefferson he did not seek financial reward for the project. Jefferson’s interest in Classical architecture made him a natural ally in helping Ceracchi securing the commission from Congress. Ceracchi entitled his plan a: ‘Monument designed to perpetuate the Memory of American Liberty’ and it consisted of an ichnographically complex, multi-figural design featuring a sixty-foot equestrian statue of George Washington cast in bronze, surrounded by allegorical groups including a figure representing ‘the Triumph of America.’

The Senate vacillated, Ceracchi saw an opportunity to promote his scheme amongst legislators by modelling busts of important men then residing in Philadelphia. Ceracchi wrote to George Washington describing the monument and asking for him to sit, Washington later recalled that he only agreed to do so ‘with the reluctance that he always felt on these occasions.’ Others simply refused, including North Carolina representative Hugh Williamson, who wrote an excoriating letter to Ceracchi, supposing he: ‘had offered such a compliment by way of a bribe; for the man in public station who could accept of a bribe, or betray his trust ought never to have his likeness made.’ Ceracchi’s hopes of executing the monument were finally dashed when, in April 1792, the commissioners from the newly established federal district of Washington wrote to Jefferson: ‘we are of opinion that in application of the funds we ought to class our Work into Necessary, Useful and Ornamental, preferring them in that order. Without going into the Question of right to apply the money to defray the expence of Mr Cerachi’s Design, or the propriety of the design itself, we decline going to that business.’ The House of Representatives and Senate decided not to pursue the monument. Ceracchi returned to Europe.

Ceracchi made a second visit to the United States to try and revive his plans for a monument, instituting a complex subscription for its completion. In this endeavour he managed to enlist the support of Washington (who bought four shares), Jefferson, Madison, Alexander Hamilton, Aaron Burr, former Secretary of War Henry Knox, Secretary of State Edmund Randolph, and Pennsylvania senator Robert Morris. But again, Ceracchi’s plans were frustrated. His disappointment bubbled over into anger and he penned a series of condemnatory letters to Washington, amongst others, demanding payment for the busts he had carved. Ceracchi returned to Europe settling in Paris and beginning a colossal bust of Napoleon in 1796. He joined the radical anti-Bonapartists after Napoleon’s 1799 coup d’état. Ceracchi was arrested on 11 November 1800 for his participation in an assassination plot against Napoleon at the Paris Opera and was executed by guillotine on 11 October 1801.

The memory of Ceracchi’s bust of Washington remained alive amongst those who had seen it and Thomas Jefferson was keen to locate ‘the original plaister’ in 1804. Jefferson returned to the hunt in 1814 with more success. It is worth quoting the letter from Thomas Appleton in full:

‘I believe, Sir, that the last time I had the honor of addressing you, it was on the Subject of the bust of George Washington modell’d by Cerracchi. I had, in vain, long sought this bust at your Request, when finally I discover’d that mr Lee, Consul at Bordeaux was the owner of it; at which place Cerracchi disembark’d from America, previous to his fatal journey to Paris —In compliance with my advice mr Lee has forwarded it to me in Italy, and I have Confided it with a friend at Carrara.—All those Americans who have Seen it, and among the number is our friend mr mazzei, universally pronounce it an incomparable likeness; and I have had already copied various busts in marble by a Sculptor in that City and who in this branch of the art, is perhaps little inferior to Canova of Rome.—Should the government, as I have been inform’d, be desirous of a Statue or a bust, it Can be executed at Carrara on very moderate terms, & Superior in Stile to any other spot in Europe.’[3]

This letter suggests that Ceracchi’s likeness of Washington was particularly admired for its accuracy, including by Filippo Mazzei the Italian physician and close friend of Jefferson who had acted as an agent in the purchase of arms for Virginia during the American Revolutionary War. The House of Commons and the Senate of North Carolina duly resolved to commission a full-length statue of Washington. Jefferson determined that it should be completed by Canova and that Appleton should complete the negotiations. Jefferson specifically recommended that Canova should use the Ceracchi plaster in Appleton’s possession as a model.

Seeing a business opportunity, Appleton decided to serialize Ceracchi’s bust with the help of the sculptor Massimiliano Ravenna. Appleton’s surviving account book records that he ‘Paid Massimiliano Ravenna, of Carrara 100 francesoni on Account of Busts of Washington to be Deliver’d & Afterwards to be sent to the U.S’ in December 1816.[4] Appleton’s account book reveals the busts were shipped to his nephews in Baltimore, Nathan and Samuel Appleton, and had been sold on commission to Colonel Tobias Lear. The six busts were not all of Washington, two depicted Amerigo Vespucci and Christopher Columbus sculpted by Ravenna after models by Ceracchi. Colonel Tobias Lear had been Washington’s former private secretary and so was well placed to find homes for the four marble busts of Washington.

On 11 October 1816 Lear committed suicide, leaving the busts to his son Benjamin Lincoln Lear. A few months later Benjamin Lear sold three of the busts (a Washington, the Columbus and Vespucci) to the government for 100 dollars each. The purchase may have been orchestrated by President James Monroe, who had known Ceracchi in Philadelphia and who was looking for new furnishings for the White House, nearing completion of a period of restoration after the fire of 1814. As a result Ravenna’s busts of Washington, Columbus and Vespucci entered the collection of the White House, where they remain. 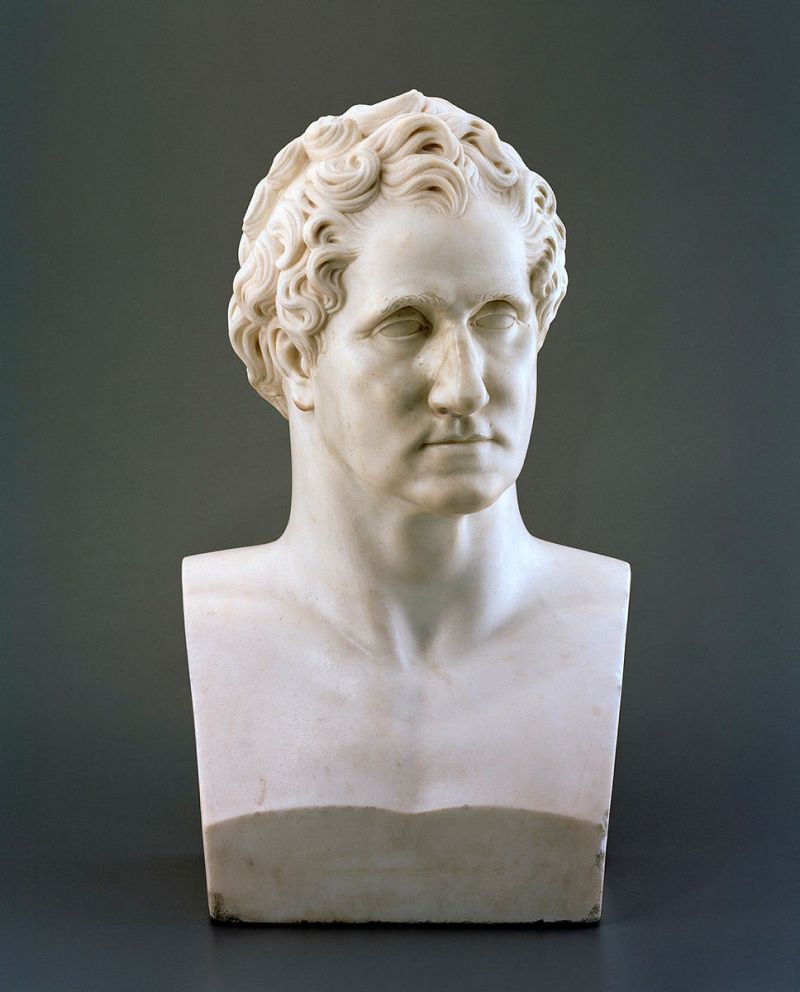 Some confusion exists amongst historians about the other busts commissioned by Appleton from Ravenna and supplied to Lear. Historians have variously identified the other busts as examples in the collection of the National Portrait Gallery, Washington and in the collection of the Gibbes Museum of Art, Charleston, South Carolina. But whilst both are based on Ceracchi’s model, neither bust seems likely to have an Appleton/Lear provenance. The National Portrait Gallery bust is not a herm, but a full-bust showing Washington wearing a toga, it is therefore of quite a different character to the herm bust at the White House. The version at the Gibbes seems to have been the bust commissioned by Appleton and sent to Antonio Canova to aid with his completion of his full-length sculpture for the North Carolina State House, having been acquired by John Izard Middleton in 1820 directly from Canova’s studio.

Only two surviving versions of Ceracchi’s bust follow the Appleton/Lear model at the White House, a bust formerly in the collection of Huldah Lorimer Mingeldorff, sold Christie’s, New York, 16 January, 2004 and the present version. This makes this bust of enormous historical interest and significance. 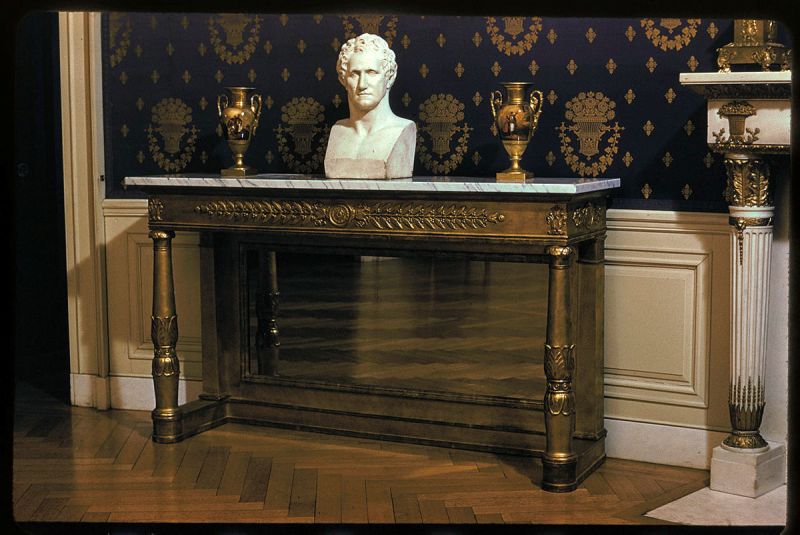 A photograph of the bust in situ in the blue room, during the Kennedy Administration