‘She is not quite eighteen – perfectly simple, gentle, and resolute – the nurse and firm governess of the younger children – and the most beautiful creature in face and form I ever saw anywhere… For a perfect woman, I never saw Lily’s like; with her dark-eyed delicate head and white shoulders.’[1]

This exquisitely worked drawing is a rare portrait by Ruskin of one of his ‘pets’, Lily Armstrong, a favourite pupil at the progressive Winnington School which Ruskin helped to fund and where he taught. Lily was one of the pupils who inspired Ethics of Dust, first published in 1865, she became one of Ruskin’s intimate correspondents and he, in turn, rhapsodised about her beauty and pureness. Despite being an enormously prolific draughtsman, Ruskin made only twenty portraits in his lifetime, six of which are self-portraits.[2] This beautiful and complex study of Lily Armstrong is therefore an exceptional example of Ruskin’s portraiture and testament to his sensitivity to adolescent girls. It is notable that this portrait was made at the height of Ruskin’s devotion to Rose La Touche, only eighteen-months Lily’s senior, she was the tragic object of Ruskin’s obsessive devotion and her death in 1875 precipitated the first of his mental collapses.

In 1859 Ruskin became an unofficial patron and teacher at Margaret Bell's progressive school for girls at Winnington in Cheshire.[3] Ruskin spent months living at the school and took part in all its activities. He taught art, divinity and many other subjects. When lessons ended he joined the girls in games of cricket, croquet or hide and seek. There were only about thirty-five girls in the school, and Winnington was an unregimented home of learning. The atmosphere was friendly and informal and Ruskin developed strong and lasting relationships with several pupils. He also actively engaged with the girls, enlisting them, for example to make the index to Modern Painters V.

As a result of Ruskin’s time at Winnington he conceived The Ethics of the Dust a dramatic dialogue consisting of ten lectures given by a Lecturer of ‘incalculable age’ – Ruskin was forty-six at the time – to a group of schoolgirls between the ages of four and twenty.[4] The lectures were ostensibly on Egyptian mythology and crystallography, but are filled with the Old Lecturer’s tales of ‘singing serpents’ and Egyptian Goddesses; The Ethics of the Dust is steeped in the mythological realms as much as the realm of science. As Ruskin acknowledged, the ‘lectures were not intended for an introduction to mineralogy. Their purpose was merely to awaken in the minds of young girls, who were ready to work earnestly and systematically, a vital interest in the subject of their study.’[5] As a cultural and moral interpretation of natural history, The Ethics of the Dust can be understood as a precursor to later works by Ruskin.

Although Ruskin took pains to describe the characters in the book as imaginary, he explicitly identified the persona of ‘Lily’ as Lily Armstrong. In his correspondence Ruskin specifically calls her ‘Lily, my Lily of the Ethics of the Dust.’ Lily Armstrong was the daughter of Richard Armstrong, a Serjeant-at-Law in Dublin and Member of Parliament for Sligo.[6] Ruskin became fond of Lily and visited her in Ireland in May 1868 when he had been invited to give a lecture in Dublin. Ruskin filled his letters with references to Lily. Writing to his mother from Winnington in October 1864, when Lily was 12, he noted: ‘she is so exactly what a girl ought to be – not a bit of showiness or display in her dress or ways… She has been growing fast taller, but her face remains small – so that proportion is far more beautiful than it was.’[7]

Ruskin’s carefully worked drawing captures the sitter in early adolescence. Meticulously observed and carefully constructed with a mass of hatched pencil lines, Ruskin animates his study with touches of wash: pink on her cheeks and lips, brown for her hair and eyes and a small amount of scratching out and applied blue to frame her chin and cheeks. Ruskin’s evident delight in Lily is captured in this intense and exquisitely rendered drawing.

The only comparable works by Ruskin are the sequence of drawings he made of Rose La Touche. Ruskin first met Rose La Touche in January 1858, just after her tenth birthday and just before his thirty-ninth. He formed a close, all-consuming passion for the girl, eventually proposing marriage, just after Rose’s eighteenth birthday in January 1866. Calamitous revelations by Ruskin’s ex-wife, Effie Millais, to Rose’s mother effectively ended any prospect of marriage. The unsettling reality of Ruskin’s interest in adolescent girls cannot be ignored.[8] The facts of his tragic relationship with Rose, while shrouded in mystery, reveal even at their least pernicious a middle-aged man who fell in love with a girl of ten. This portrait of the young Lily Armstrong cannot be viewed without this troubling context in mind.

Ruskin could not help but compare Lily Armstrong to his paragon, Rose La Touche. On his visit to Dublin in 1868 Ruskin wrote home:

‘Lily, my Lily of the Ethics of the dust, is therefore lady of the house, for her mother leaves nearly everything to her. She is not quite eighteen – perfectly simple, gentle, and resolute – the nurse and firm governess of the younger children – and the most beautiful creature in face and form I ever saw anywhere – but she has none of Rosie's genius, or wild spiritual nature. For a perfect woman, I never saw Lily's like: with her dark-eyed delicate head and white shoulders and long satin dress, at a full dress party on Saturday she was like a princess of the Arabian nights.’[9]

In a sense this delicately handled watercolour perfectly captures Ruskin’s appreciation for her physical perfection. Ruskin evidently expended some efforts to capture the purity of her complexion and the delicacy of her features.

The exact date of this drawing is difficult to determine. It has historically been accompanied by a letter from Ruskin to Lily dated ‘Denmark Hill, 29th May 67’ which suggests the two had not seen each other for five months, Ruskin gives news of a French edition of The Ethics of the Dust, but makes no mention of a portrait drawing. The portrait seems likely, therefore, to have been made at Winnington in 1866, when Lily would have been 14 or 15. Ruskin made another portrait of Lily in around 1870, intensely worked in rich watercolour and showing her as a grown woman, the drawing is now in Victoria and Albert Museum. The two remained correspondents until the end of Ruskin’s life. Despite making a record price at auction in 1985, this drawing has remained surprisingly unknown to scholars. 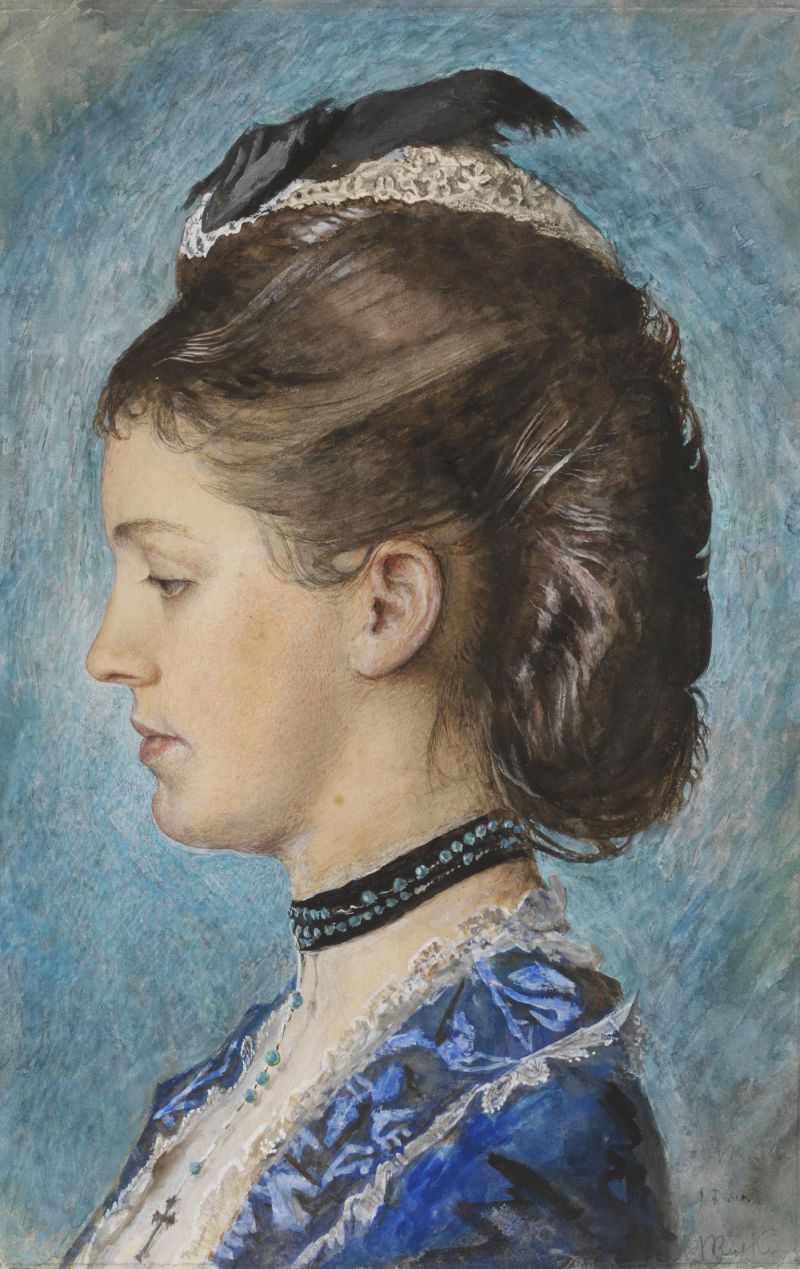 It is very sweet and lovely of you to recollect me – not only after so long a time, but a time of various change, which must have made you quite another Lily than the one I knew – only I see she has the same loving heart.

But you must write me now, before another five months pass, to tell me you are better please.

I think you, or perhaps, rather your father & mother, will like to know that the Ethics of the Dust are going to be translated into French. I think French readers will like them better – and understand the little girls better, than English ones have done – and I shall put a note or two to take off the heaviness & difficulty of the first allegory.

I am very glad to hear of the drawing – but the great thing is to get quite well again.