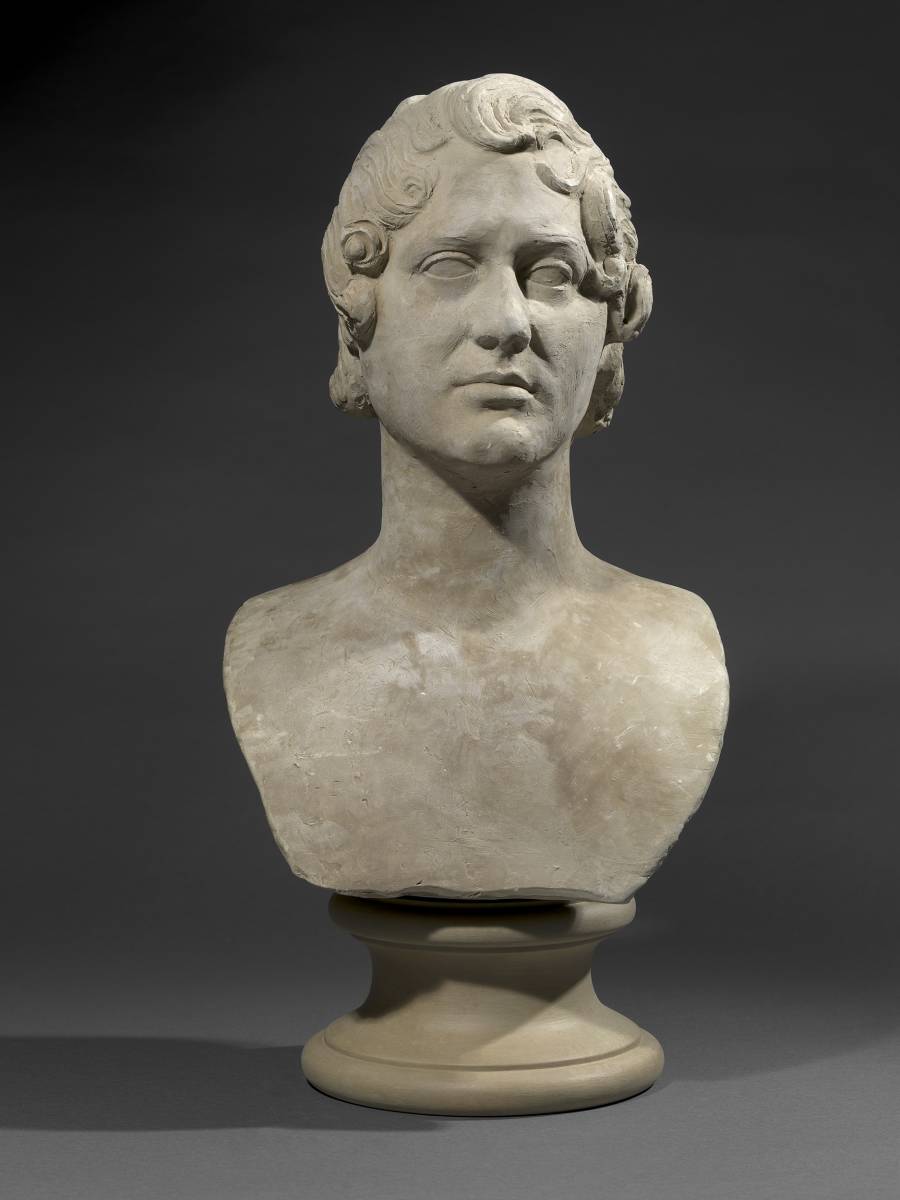 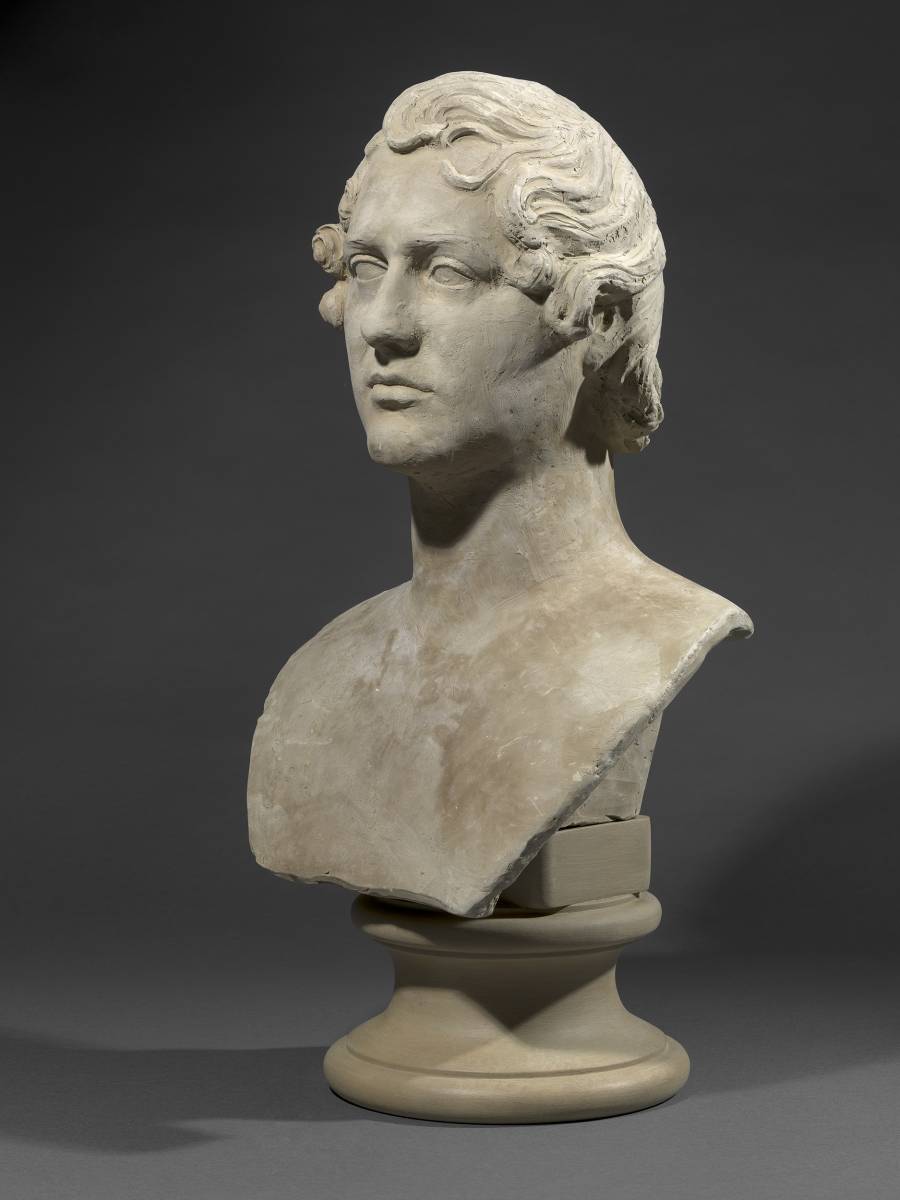 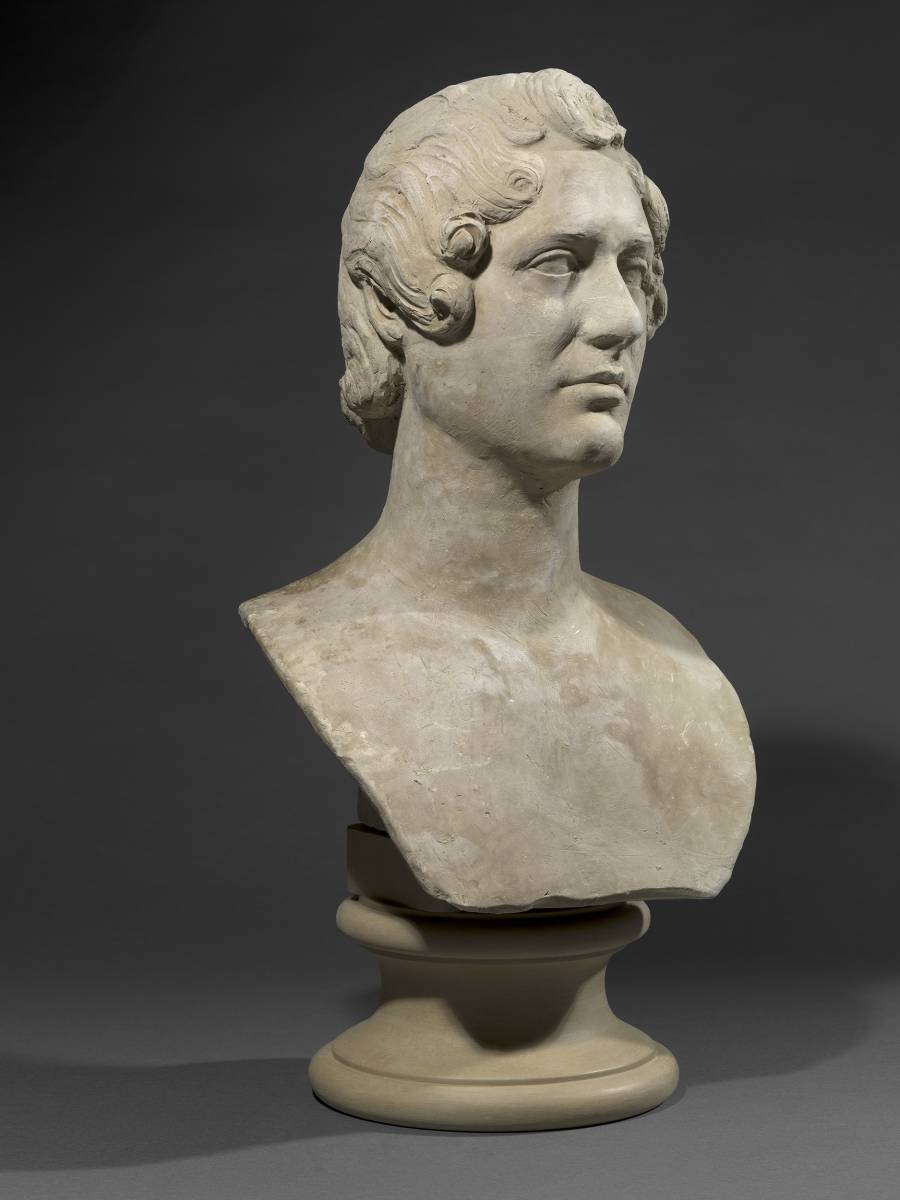 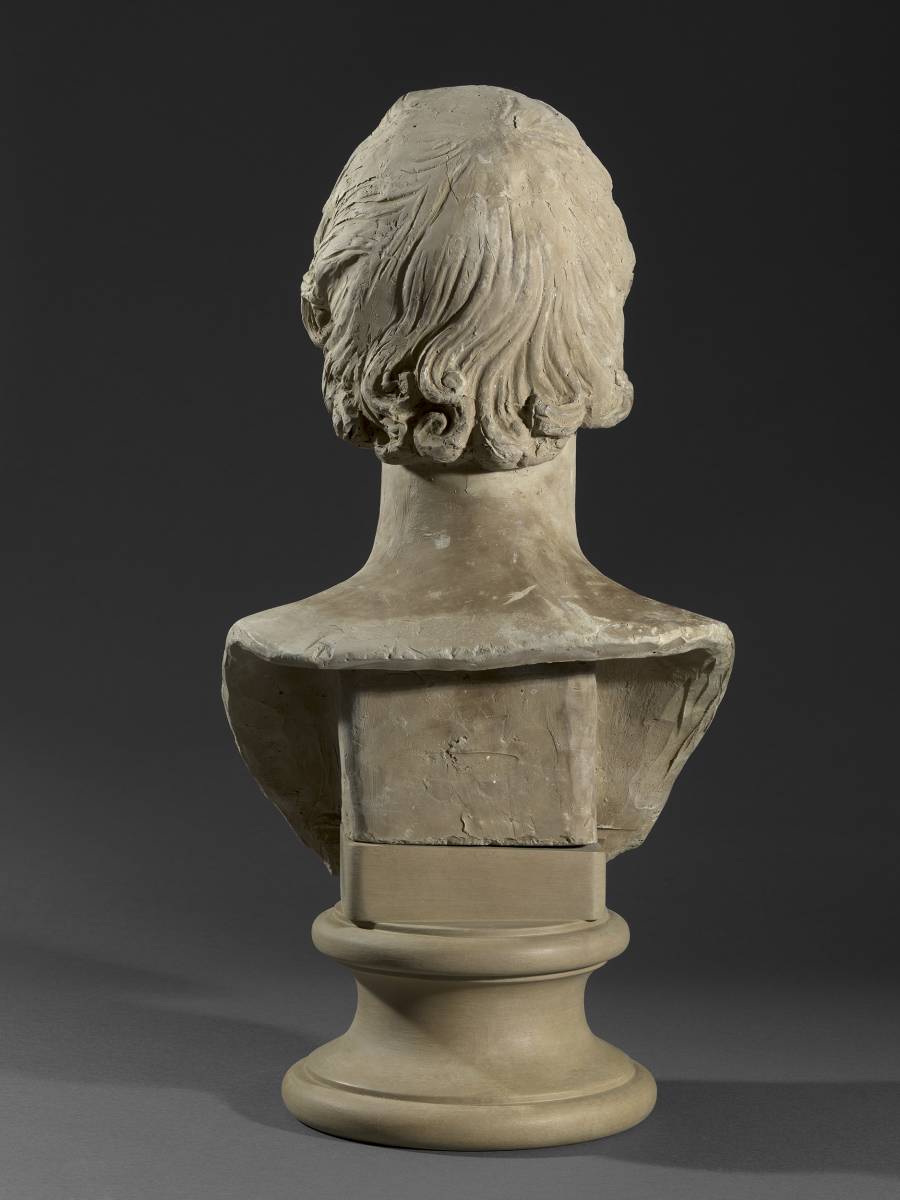 By the end of March 1822 Lord Byron, the greatest living poet in Europe, had finished sitting to Lorenzo Bartolini for his bust, the result was this previously unpublished terracruda model.

Preserved in spectacular condition, this forceful ad vivum study records Byron two years before his death at Missolonghi in 1824. The circumstances of this study are unusually well documented. Bartolini wrote to Byron in October 1821 asking him to sit for his portrait and permission to present Byron with the finished marble, sittings began on 3rd January 1822.[1] Byron himself reported to his publisher John Murray the circumstances of the work:

‘Bartolini, the celebrated Sculptor, wrote to me to desire to make my bust: I consented on condition that he also took that of the Countess Guiccioli. He has taken both, I think it will be allowed that Her’s is beautiful...Of my own I can hardly speak, except that it is thought very like what I now am, which is different from what I was, of course, since you saw me. The sculptor is a famous one; and as it was done by his own particular request, will be done well, probably.’[2]

Byron added: ‘The busts which you enquire after have been paid for, but are not even begun. Bartoloini is famous for his delays, something like yourself.’ Thomas Medwin watched the present model being sculpted and praised it for being ‘an admirable likeness’.[3] This rediscovered terracruda bust is therefore the most important, documented life study of Byron outside of a public institution.

Lorenzo Bartolini emerged from humble beginnings to become the most highly esteemed Italian sculptor and heir to Canova. Born to a family of blacksmiths, Bartolini was trained to manufacture decorative metal ornaments. In adolescence he travelled to Florence, and in 1797 made his way to Paris where he entered the atelier of Jacques-Louis David. There he immersed himself in neo-classical painting, possibly introducing John Flaxman’s Homeric illustrations (which he had discovered a few years earlier in Italy) to his friend and classmate, Jean-Auguste-Dominique Ingres. The two remained life-long friends and there are three extant portraits by Ingres of Bartolini.

In 1801, the year Ingres won the Grand Prix de Rome in painting, Bartolini was awarded with the second prize for his relief of Cleobis and Biton. With this his career was launched and soon he was charged by Napoleon’s powerful cultural minister, Vivant-Denon, with the execution of a bust of the emperor for the Vendôme Column as well as a relief of the battle of Austerlitz. Protected by Napoleon and his family, in 1807 Bartolini was appointed director of the Carrara Academy's school of sculpture. Bartolini was under the patronage of Delice Pasquale Baciocchi and his wife Elisa Bonaparte who were Prince and Princess of Lucca and Piombino. Here he executed the marble bust of Elisa Baciocchi; then, between 1808 and 1813, those of Lucien Bonaparte, Girolamo Bonaparte and of Napoleon. Finally, in 1813, Bartolini began a colossal sculpture of Napoleon for Elisa Bonaparte for her Palazzo in Lucca. Bartolini’s studio was destroyed by an anti-French mob in 1813 when he joined Napoleon in exile on Elba.

On his return, Bartolini settled in Florence where he enjoyed the wide patronage of a foreign clientele. He was particularly fashionable amongst British travellers. In his Diary of an Invalid published in 1820, Henry Matthews noted: ‘Bartolini is an excellent workman, and takes admirable likenesses... it is now fashionable among the English to sit to him.’[4] This seems to have been as a result of encouragement from the British Minister at Florence, Lord Burghersh (later Earl of Westmorland) who sat with his wife for busts. As John Kenworthy-Browne first noted, Bartolini’s speed of execution – he completed a bust of the poet Thomas Moore in four sittings in 1819 – and his relatively inexpensive prices undoubtedly made him attractive to the largely transient British clientele in Florence.[5]

Bartolini travelled to Pisa where Byron was then resident when on 3 January 1822, Percy Bysshe Shelley’s friend, Edward Williams ‘call[ed] on Lord B., and [found] him sitting for his bust to Bartolini.’ A week later he called and saw ‘Bartolini at work – a fine bust.’[6] During his stay in Pisa the artist met several of the Byron and Shelley circle: Mary Shelley noted in her journal on 13 January that she went ‘to the opera in the evening with W[illiams] Pierino [Count Pietro Gamba, Teresa Guiccioli’s brother] & Bartelini [sic].’[7] These references are presumably to the present terracruda model, Bartolini’s ad vivum study of Byron.

We have a description of the sittings given by Thomas Medwin in his Journal of the Conversations of Lord Byron: noted during a residence with his Lordship at Pisa, published in 1824:

‘Being with him, day after day, some time afterwards, which he was sitting to Bertolini, the Florentine sculptor, for his bust, I had an opportunity of analyzing his features more critically, but found nothing to alter in my portrait. Bertolini’s admirable likeness, at least was so in the clay model. I have not seen it since it was copied in marble, nor have I got a cast; he promised Bertolini should send me one. Lord Byron prided himself on his neck; and it must be confessed that his head was worthy of being placed on it. Bertolini destroyed his ébauches more than once before he could please himself. When he had finished, Lord Byron said, ‘It is the last time I sit to sculptor or painter.’[8]

Thomas Medwin mentions the present ‘clay model’ and the fact that Bartolini struggled with the bust, destroying a number of ‘ébauches’, presumably studies in clay. In common with Williams, who calls it ‘a fine bust’, and Byron himself, who admitted that it was ‘thought very like what I now am’, Medwin praised the ‘admirable likness.’ Bartolini’s animated clay model shows Byron, with his head turned, as if in conversation. The refined features and carefully modelled hair all point to Bartolini’s careful attempt to capture Byron naturalistically.

The process of turning the terracruda model into a finished marble required Bartolini to take a cast in gesso. The gesso survives as part of the Gipsoteca Bartoliniana which was acquired by the Italian state in 1883 and deposited in the Galleria d’Arte Moderna in the Pitti Palace, Florence. Comparing the present model to the gesso reveals a number of subtle differences, particularly in the treatment of Byron’s hair, the clay model also shows Byron to be somewhat fleshier in his face than in the surviving gesso. The circumstances of these alterations are described by Teresa Guiccioli:

Byron was apparently highly sensitive about his weight. Byron’s friend, John Hobhouse, noted in Pisa: ‘he is much changed – his face fatter, and the expression of it injured.’[10] It therefore seems likely that both Byron and Teresa Guiccioli encouraged Bartolini to make the changes to the mould (‘Bartolini fit et refit le moule plusieurs fois’). This explains the slight differences between the present model and the surviving gesso in Florence. Bartolini continued to refine and alter the composition in the finished marble. In transposing the model to marble, Bartolini made several interventions, Byron’s hair, for example, is made more modish, as Bartolini adds whiskers coming on to Byron’s cheeks and subtly thins the face. The result was that the marble no longer successfully captured Byron’s appearance.

Byron offered to make a present of both busts to his publisher John Murray as a compensation for the trouble he had had over the bust commissioned by John Hobhouse from Bertel Thorvaldsen. But in September 1822 Byron wrote to Murray about the marbles: ‘The bust does not turn out a very good one – though it may be like for ought I know – as it exactly resembles a superannuated Jesuit. I shall therefore not send it as I intended... I assure you Bartolini’s is dreadful – though my mind misgives me that it is hideously like. If it is – I cannot be long for this world – for it overlooks seventy.’[11] Byron’s dislike of the bust was echoed by others who saw the finished marble. Murray never received Byron’s versions and they passed to his banker, Charles Barry and from his descendants to the South African Library at Cape Town. Byron’s dissatisfaction with the final marble meant that Bartolini made relatively few copies in marble and few plaster casts. This terracruda model is therefore a remarkable rediscovery and stands as one of the most important life studies to have been made of Byron to survive. As an unfired clay sketch it also offers unprecedented evidence of Bartolini’s working method at the height of his career. 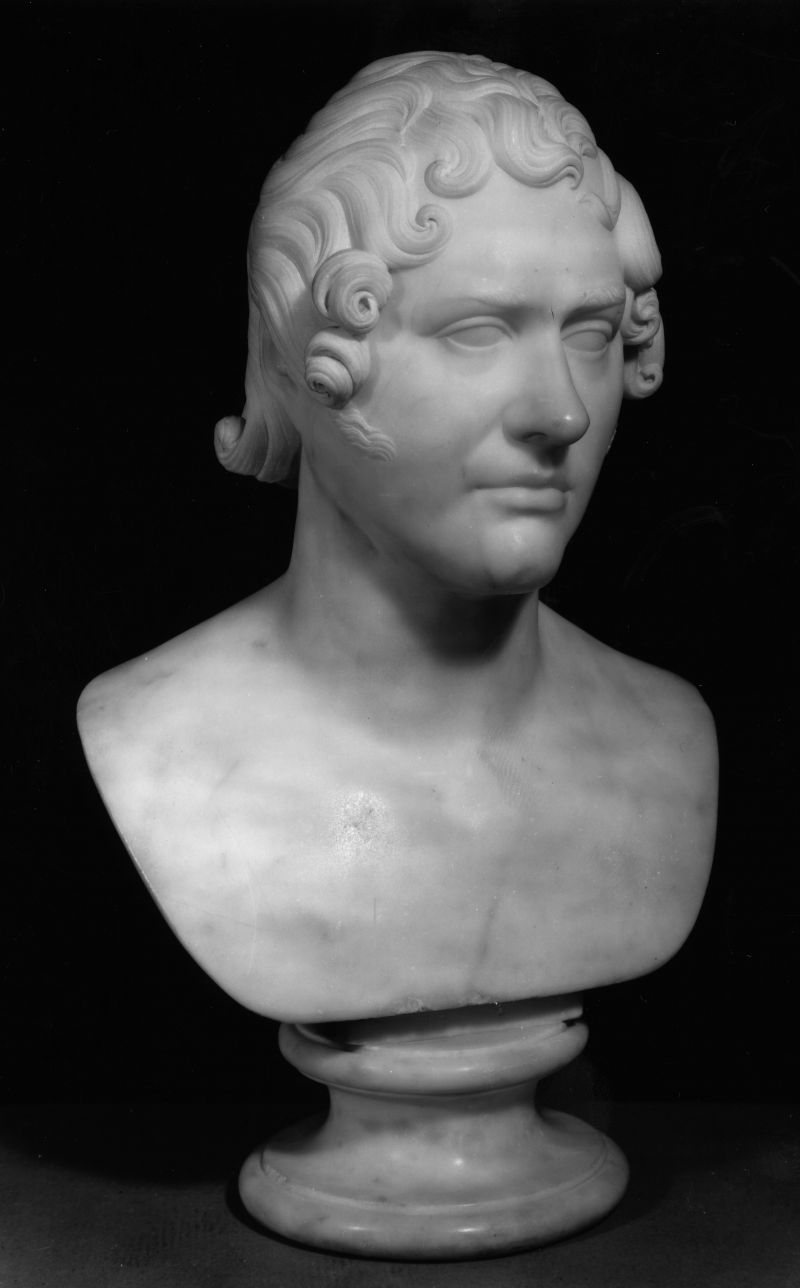