This characteristic study was made by Richard Wilson during his residence in Rome in the early 1750s and belongs to a group of drawings which were first owned by his travelling companion William Lock. Executed rapidly in black and white chalk on blue-grey coloured paper, this drawing was almost certainly made on the spot. During his time in Rome, Wilson pioneered the practice of making studies en plein air. As a result Wilson developed a form of landscape painting that combined the modes of Claude and Gaspard Dughet with a careful approach to topography. From early in his stay in Rome, Wilson was working on a major sequence of views of the environs of the city, commissioned by William Legge, 2nd Earl of Dartmouth.

This subtle, vertical study is carefully inscribed by Wilson, ‘Negroni’ identifying the subject as a view of the grounds of the Villa Montalto-Peretti, known in the eighteenth century by the family name of its then owners, Negroni. The precise view shows the ancient hill, known as the Monte della Giustizia, which formed an important feature within the villa’s gardens, it was crowned by an ancient seated figure of Roma. Wilson shows the colossal sculpture arm raised, holding a spear, profiled within a ring of cyprus and umbrella pine trees. As with many of Wilson’s drawings, this view, on the eastern fringes of the city, would go on to become one frequently explored by later British artists including John Robert Cozens.

Executed in black chalk, heightened with white the drawing is broadly handled pointing to the influence of French draughtsman working at the Académie de France à Rome. Wilson was close to a number of French artists, including Claude-Joseph Vernet and almost certainly developed his distinctive approach to landscape drawing from observing the work of French painters. There is evidence to suggest that Wilson went sketching with Gabriel-Louis Blanchet, whose drawings are close in style to Wilson’s early Roman work. Studies such as this show how Wilson came to master the use of black and white chalk on toned paper. Wilson told Ozias Humphry that ‘the best and most expeditious mode of drawing landskips from nature is with black chalk and stump, on brownish paper touched with white.’ It was with this in mind that Humphry wrote from London to Francis Towne in Rome in April 1781: after  sending regards to friends Jones and Pars in Rome he says, ‘I shall esteem it a great favour if you would be so obliging as to bring me three or four pounds of Black Italian Chalk but pray take care that it is really good, smooth & Black because we have an indifferent sort in great abundance here’.[1] 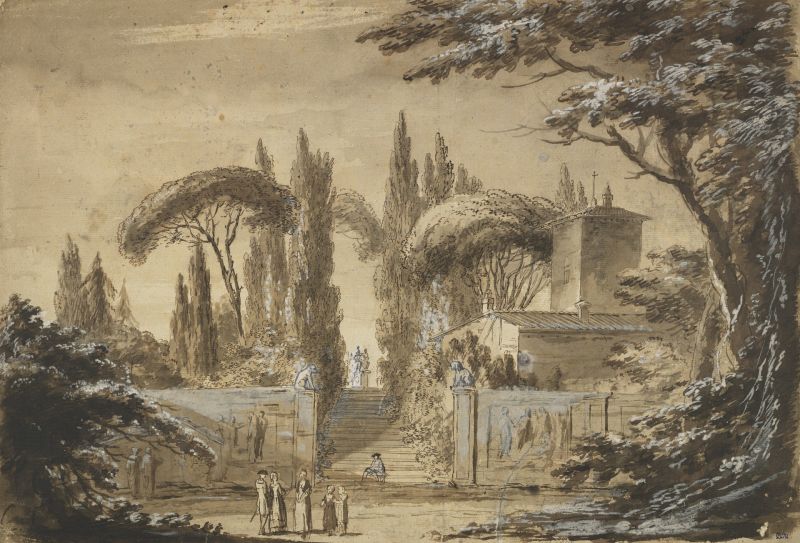