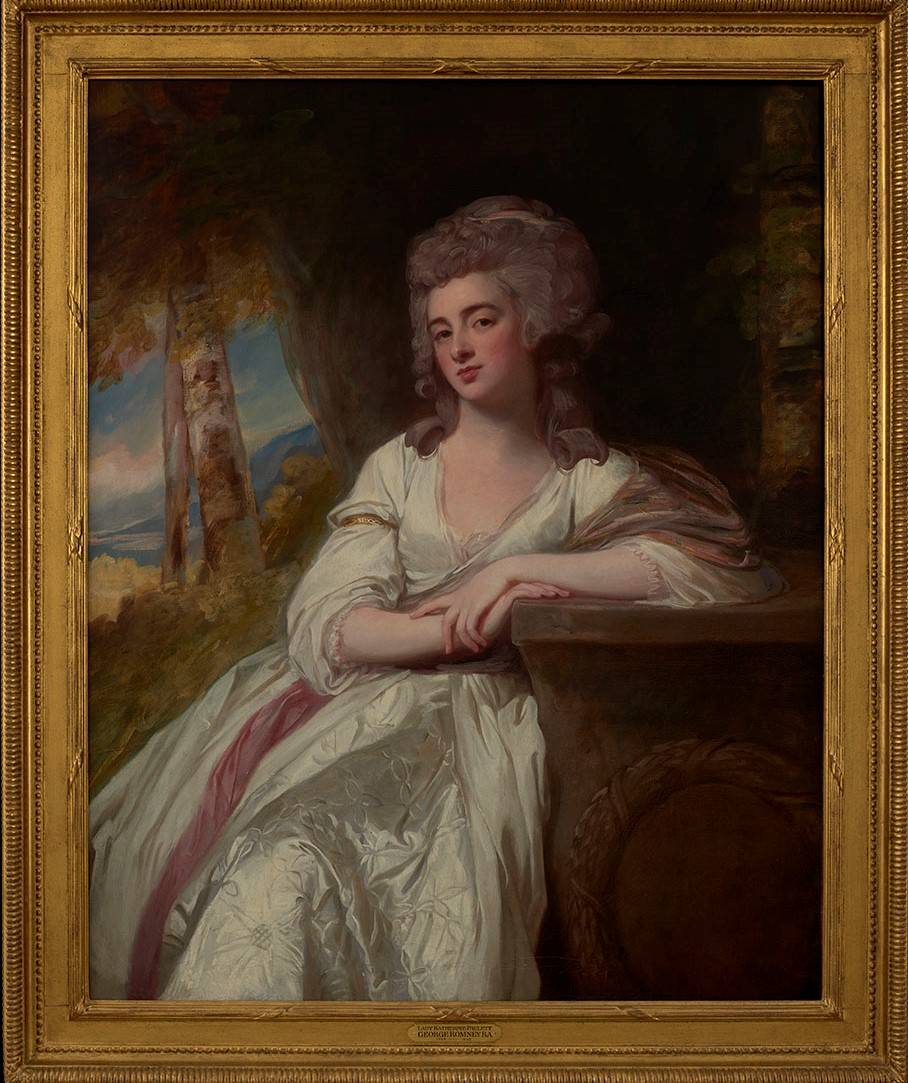 This spectacular portrait is one of the grandest female half-lengths made by Romney in 1776, a year that has been described by the Romney scholar, Alex Kidson as his: ‘Annus mirabilis’. It was the year that Romney reached his height as a painter, producing a sequence of spectacular society portraits which have been consistently admired since their completion. Romney’s most lushly and elegantly executed female portraits became particularly sought-after at the end of the nineteenth century, when they were acquired by several members of the Rothschild family. The present staggeringly accomplished portrait was acquired by one of the most impressive collectors of the late nineteenth-century Alfred Charles de Rothschild and is recorded at Halton House in Buckinghamshire; it remained in the Rothschild family collection until 1997 and, exceptionally, has never appeared at auction.

George Romney was born in modest circumstances in Cumbria, he trained in Kendal with the itinerant portrait painter Christopher Steele before moving to London. In London Romney supplemented his provincial training, working in the creative circles around the second St Martin’s Lane Academy, studying prints and paintings in private collections and working in the cast gallery of the Duke of Richmond. Romney began to establish a successful career as a portrait painter. He spent several periods working back in the North of England before heading to Italy on the Grand Tour in 1773. Romney’s time in Rome had a transformative effect on his style, lightening his palette and exposing him to Continental painting styles. On his return to London, Romney was ready to establish himself as one of the foremost society portraitists in London.

In November 1775, in a calculated gamble, Romney took the expensive lease on a large house on the south side of Cavendish Square which had formerly been occupied by Francis Cotes. It was in the fashionable new part of London where aristocratic families were building properties and moving to live. At the same moment, perhaps not coincidentally, a series of former patrons came forward with gestures of support. Lord Warwick bought the portrait—extended to the size he required—of Edward Wortley Montagu. Sir George Warren commissioned a full-length portrait of his now teenage daughter Elizabeth (National Gallery of Wales, Cardiff). Richard Cumberland published his Ode to the Sun in 1776 with a dedication to Romney. Thomas Orde negotiated a commission (ultimately abortive) for an altarpiece for King's College chapel, Cambridge. The duke of Richmond, whom Romney had known since his days studying at the duke's sculpture gallery, commissioned several copies of a portrait of himself (versions are at Goodwood and in the National Portrait Gallery) as well as of other members of his family and political associates. But the most important patron of all at this period was a new one: Lord Gower, president of the council in Lord North's government, who in July 1776 became Lord Warwick's uncle by marriage. He commissioned a full length of himself in Garter robes  as well as The Leveson-Gower Children, Romney’s magnificent large group portrait of his five youngest children from two marriages. One of the most original and significant group portraits of the eighteenth century Because the sittings for this ambitious work were necessarily protracted, it stood for many months in Romney's painting room, a timely and magnificent advertisement of his powers.

During this period Romney laid the principles from which his portrait practice took off. He established a scale of charges for his portraits below those of Reynolds and Gainsborough, but above those of other artists, thus appearing to offer good value while preserving an aura of exclusivity. He created a distinctively direct and informal appeal to prospective patrons by accommodating sittings whenever he could (which meant forswearing work on historical compositions during the day) and by refusing to exhibit in public and relying on word of mouth for commissions. He employed (at least at the outset) very little studio assistance, which not only seemed to guarantee the ‘authenticity’ of the end product, but also created an atmosphere of privacy and intimacy in his painting rooms. Above all, he clearly consciously decided that the way to make more money was to paint more quickly.

By December 1776 Romney's career had been transformed. Josiah Green, a mutual friend, wrote to Ozias Humphry in Rome:

‘when I enter his house I tremble with I know not what! I can scarce believe my Eyes! Such Pictures! I am lost in wonder & astonishment how all these things shoud be! How so short a travel coud give such Excellence to his Pencil! How an almost unfriended Man should at once contract so noble and numerous a Patronage!’[1]

Amidst this astonishing period of productivity Mrs Margaret Smith came for six sittings between April and July. Margaret Smith precisely fitted the profile of Romney’s new wealthy clientele. The daughter of Ynyr Burges who was the paymaster of the East India Company and wife of John Smith a director of the East India Company and Lieutenant-Colonel in the 3rd Regiment, East India Volunteers. Smith later changed his name to Smith-Burges and received a baronetage in 1793. Her portrait perfectly fits the splendours of Romney’s output in this remarkable period.

As Alex Kidson has observed, after 1775 Romney’s handling of paint became noticeably looser and more spontaneous, and he ceased making extensive series of preliminary drawings for his major portraits; indeed, for many of them he did not prepare at all, but began painting straight onto the primed canvas. This had the advantage that sittings might become virtuoso ‘performances’—John Wesley for example wrote that:

‘Mr Romney is a painter indeed! He struck off an exact likeness at once, and did more in an hour than Sir Joshua did in ten.’[2]

Romney’s portrait of Margaret Smith perfectly encapsulates his virtuosic use of paint. Richly worked in liquid oil, Romney has caught Margaret Smith seated, her left arm resting on an antique altar. Dressed in an expensive white silk gown, with a pink shawl, Romney revels in the lush textures of the costume. The loosely worked costume is in deliberate contrast to the expertly modelled face and hands and cascading impasto of her undressed hair. Romney has seated Margaret Smith in a broadly worked landscape, giving a hint of the cult of sensibility which gripped aristocratic British portraiture at this date. This consummate essay in Romney’s mature style stands as one of his finest and most commanding female portraits.

The power of this portrait explains its acquisition by Alfred Charles de Rothschild, one of the major tastemakers of late nineteenth-century Britain. Rothschild assembled an unparalleled group of eighteenth-century British portraiture including scores of sensuous female portraits by Gainsborough, Reynolds and Romney. It was this taste for lushly worked female portraiture of the period which he shared with his brother-in-law, Ferdinand de Rothschild who assembled a parallel collection at his neighbouring estate, Waddesdon. Other members of the family also acquired great works by Romney, including Baron Édouard de Rothschild who purchased the grand portrait of Dorothy Stables in 1890, which sold at Christie’s, London in 2021 for £742,500. It was a taste emulated by the new collectors in the United States and meant that Romney held the record for a work of art at auction from 1913 until 1926.