Thomas Gainsborough’s late drawings are some of the most evocative and ambiguous artistic statements of the eighteenth century. Often appearing deceptively simple, combining a limited group of motifs in a narrow range of techniques, they are frequently works of tremendous power with a profound emotional quality. In this characteristic example Gainsborough plays with one of his favourite subjects: rural figures returning from market. The three riders, accompanied by a packhorse, two donkeys and dog, are shown at the close of day, silhouetted against the failing light. It was a motif that Gainsborough explored in a series of grand exhibition landscapes in the 1770s including Travellers Returning from Market (Kenwood House) and the silvery masterpiece Going to Market, Early Morning (private collection). This unusually bold and beautiful sheet has a particularly distinguished twentieth-century provenance and an extensive exhibition and publication history, it is consequently seen as one of the quintessential late Gainsborough drawings.

Writing in his Anecdotes of Painters published in 1808, Edward Edwards made an important early public assessment of Gainsborough’s late landscape drawings:

This drawing perfectly encapsulates these qualities: Gainsborough has used black ink, wash and touches of black chalk on wove paper to create a strikingly simple composition; the distant hills rendered with little more than a faint wash line.  Despite this apparent simplicity, the drawing nevertheless has a profound emotional appeal. Edwards characterised Gainsborough’s late landscapes as ‘free sketches’ pointing to the fact that he developed a visual shorthand, particularly in his handling of trees, figures and animals; the latter often appearing in an almost abstract reduction of shapes and lines. Looking at the dark silhouette of the unmounted packhorse at the centre of the composition, its slow gait is masterfully rendered with a few strokes of inky black wash.

But it is Edwards’s identification that Gainsborough’s landscape drawings evoked feeling  – ‘a certain degree of solemnity’ – which is so revealing. From the mid-1770s Gainsborough produced a series of powerful, grand landscapes dealing with the subject of the rural poor going to, and returning from, market. Dating to the following decade our drawing shows Gainsborough revisiting this theme. More specifically our drawing shows Gainsborough returning to the composition of Going to Market, Early Morning, which he had sold to Henry Hoare of Stourhead in 1773. But rather than showing the beginning of the day, in this drawing the figures and their weary, downcast animals with empty paniers are clearly returning at the end of a long day. It is this sense of weariness that gives a solemn aspect to Gainsborough’s drawing.

But the precise nature of the figures, where they have been or what they have been doing is unclear. For Gainsborough this kind of ambiguity was a deliberate visual strategy. To the eighteenth-century viewer landscapes peopled with riders on a track would instantly recall subjects familiar from countless old master paintings; the present work could, for example, be compared to a Flight into Egypt. In the 1760s his friend William Jackson suggested Gainsborough paint a Flight into Egypt, Gainsborough responded in characteristic fashion: ‘do you consider…what a deal of work history Pictures require to what little dirty subjects of Coal horses & Jack asses and such figures as I fill up with.’[2] Of course, these rhetorical protestations preface one of Gainsborough’s most significant observations about the purpose of his landscape art: ‘to create a little business for the Eye to be drawn from the Trees in order to return to them with more glee.’ The idea of ‘a little business for the Eye’ and the sense that meditation on his landscape compositions might bring ‘glee’ points to how Gainsborough, and contemporaries, appreciated his late drawings. The pleasure came from contemplating nature and innocent rural life uncorrupted by urban manners and morals. By the time he made this drawing, sensibility, or the ‘cult of feeling’, was at its height in Britain. Sensibility exalted feelings over the intellect as the true expressions of a person’s innate morality, and there is no doubt Gainsborough saw himself as a painter of Sensibility once arguing that he always sought ‘a Variety of lively touches and surprising Effects to make the Heart dance.’[3]

Michael Rosenthal has demonstrated that Gainsborough’s rural figures were based on close observation and that Gainsborough was conscious of the stratification of British rural communities. Susan Sloman has given important context to Gainsborough’s mention of ‘Coal horses & Jack asses’ in his letter to Jackson, pointing out how accurately he observed the various labourers he would have seen in and around Bath. By the 1760s many commentators noted the colliers close to Bath and the prevalence of miners in the city itself.[4] The two mounted figures, with their distinctive wide brimmed hats may well be identifiable as colliers.

Edwards called these late drawings by Gainsborough his ‘moppings’ – implying that they were the result of felicitous accidents - and later scholars have seen a parallel with the ‘blot’ method of Alexander Cozens. But this characterisation belies the careful structure of this drawing. Gainsborough has worked across the whole sheet laying in areas of fluid, ink wash, in areas, such as the bank on the left, he removes the saturated wash to give a mottled effect. The trees on the right are carefully built up with layers of ink wash of varying intensity, first a thinned, grey wash is used to suggest the foliage and then a more saturated wash is used to give architecture and definition. The sophistication of his method is demonstrated by the fact that Gainsborough articulates the second horse in reserve, defining the outline against the other mounts, whilst leaving the lightly washed paper to serve as a silhouette of the animal. These qualities have all contributed to this drawing being widely exhibited and published in the twentieth century. 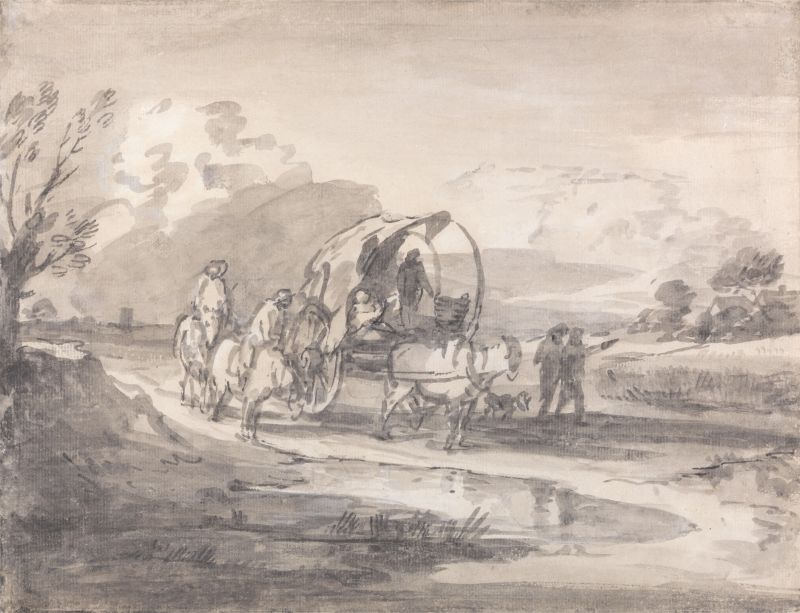