'I have done a great deal of skying - I am determined to conquer all difficulties...That Landscape painter who does not make his skies a very material part of his composition...neglects to avail himself of one of his greatest aids.'

John Constable in a letter to John Fisher, 23rd October 1821

Constable’s cloud studies are regarded as some of the most immediate and compelling works of art made during the nineteenth century: this little-known example is one of the boldest, most dramatic and largest of the cloud studies to survive. Made in Hampstead in 1822, this expansive and technically innovative work fits into a key moment in Constable’s development when he was working on his large-scale landscape paintings, in which the skies formed the ‘key note, the standard of scale and the chief organ of sentiment.’[1] Having started as a means of enriching his landscape paintings however, Constable's study of the sky became for him both a subject of scientific curiosity and an emotional obsession. 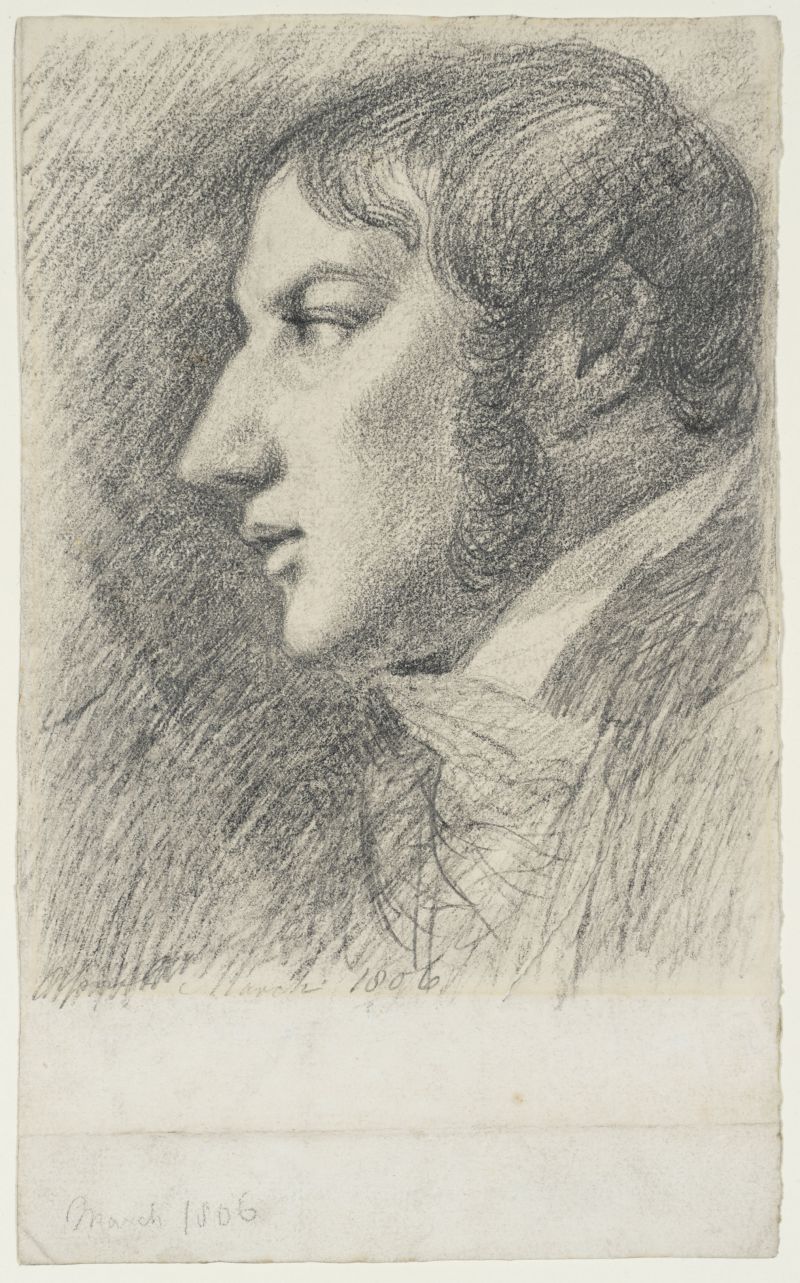 Constable first rented a house in Hampstead in the late summer of 1819. His wife had given birth to their second child, Maria Louisa, in July and the cleaner air was intended as a tonic for the small children as much for their mother. The location came to play a central role in the development of Constable’s art. In the early nineteenth century Hampstead attracted a great number of landscape artists. Constable’s friend, the amateur artist and musicologist, William Crotch, whom Constable met around 1806-1807, was sketching on the Heath at around this time. From 1822 John Linnell had lodgings at North End, Hampstead and he later moved to Collins Farm on the Heath itself. William Collins, one of Constable’s friends, lived on the Heath throughout the 1820s, ‘removed from the interruptions of London life… and preparing his pictures under all the peculiar advantages which his residence so liberally offered to the votary of landscape art.’[2] In the last of Constable’s English Landscape Scenery prints Collins is depicted sketching on the Heath.

In 1820, after spending part of the summer in Salisbury, Constable and his family moved to Hampstead at the beginning of September. A few Hampstead oil studies survive from October of 1820, however it was not until the summer of the following year that Constable was able to concentrate fully on his study of the sky. From his lodgings at Lower Terrace, which allowed him easy access to the western end of the Heath, Constable set about recording the ever-changing conditions and formations of the sky in an almost obsessive manner. Constable clearly relished the artistic challenges inherent in capturing this most elusive and volatile of subjects and was scrupulous in his approach, often annotating his sketches with the precise location, date, time of day and prevailing weather conditions. On a sketch dated 'Sepr. 10. 1821.' for example, Constable noted 'Noon. gentle Wind at West. Very sultry after a heavey [sic] shower with thunder. accumulated thunder clouds passing slowly away to the south East. very bright and hot. all the foliage sparkling and wet.’[3] Constable would often paint on consecutive days and sketches surviving from the 10th, 11th, 12th and 13th of September 1821 show that his approach could be as varied as the weather. On occasions he would even execute several studies in a single day, for instance on 27 September 1821 when he made sketches at ten in the morning, at noon and at four in the afternoon, as if gathering proof not only of the different cloud formations created by the fluctuating weather conditions, but also of the speed of their transition.[4] Constable was eager to gain a scientific understanding of these complex cloud configurations in order to depict them as accurately as possible; he followed contemporary studies in meteorology, notably Thomas Forester's Researches About Atmospheric Phaenomena (1813) and Luke Howard's essay on the classification of clouds in The Climate of London (1818-20).

John Constable
Cloud study with treetops and a building, 10 September 1821
Oil on paper
9 ¾ x 11 ⅞ inches; 248 x 302 mm
Inscribed on the verso: 'Sept. 10 1821, Noon gentle wind at West. Very sultry after a heavey [sic] shower with thunder accumulated thunder clouds passing slowly away to the south East, very bright and hot, all the foliage sparkling [‘with the’ deleted] and wet'
Private collection

In this study the sky is being swept along at great speed; dark blue and grey storm clouds, driven by a strong westerly breeze, threaten to engulf the billowing 'cumulus congestus' clouds and in turn the sun-filled sky beyond, while sheets of rain fall in strong diagonals from below the clouds. The energy of the brushwork conveys the speed of execution, as Constable hastens to record this transient effect. The overt (arc-shaped) scuff to the surface upper left may in fact have been caused by the artist as he hurried to pack his brushes and escape the ensuing rain. Constable noted on a study of 3 September 1821 'very sultry, with large drops of rain falling on my palette.'

This study is remarkable for its scale, only four works of comparable size (measuring approximately 475 x 580 mm) survive from 1822, now in Tate Britain, Birmingham Museum and Art Gallery, the Ashmolean Museum and a further sheet dated 1 August, however these are all on paper.[5] While Constable used heavy millboard of this type throughout his career, he rarely employed it for cloud studies, opting instead for paper, which was often subsequently laid down on canvas or board. The slightly rough surface of the millboard adds a texture and energy to this study, especially in the dark storm clouds to the right where Constable has applied the paint very thinly.

Another significant feature of this sketch is the reserve that has been left along the lower edge for the foliage, which has helped to clarify an important aspect of Constable's working practice, namely that he painted the sky before filling in the landscape. This is of course in keeping with Constable's belief that the sky governed the chiaroscuro and entire mood of the landscape below. This sketch was also made at a key moment, when Constable was shifting the balance of foliage and sky and moving towards pure sky studies. As Timothy Wilcox has described: 'soon leaving the ground behind, he would appear to telescope into the heavens.’[6] Study of Altocumulus Clouds in the Yale Center for British Art, New Haven, which is dated 13 September 1821, is believed to be the earliest extant cloud study to dispense with any vestige of tree or building.[7]

The monumental scale of this work raises the question of its purpose in Constable’s art. The sky studies seem never to have been strictly preparatory for finished, exhibition works, rather they seem to express Constable’s life-long absorption with climate and meteorology. Constable seems never to have anticipated a public life for his oil sketches and there is no evidence that he exhibited any of his cloud studies during his lifetime. They seem, instead, to have been closely observed expressions of his wonder at the beauty and variety of creation. ‘Skies must and always shall with me make an effectual part of the composition. It will be difficult to name a class of landscape in which the sky is not the ‘key note’, the standard of Scale and the Chief Organ of Sentiment… The sky is the source of light in nature – and governs everything.’[8]