This powerful watercolour was made by William Henry Hunt in around 1830. Showing an athletic, young black model, this is an unusual work in Hunt’s oeuvre raising questions about its origins and purpose. The present watercolour was discussed at length by David Bindman and Henry Louis Gates in The Image of the Black in Western Art: Black Models and White Myths:

‘[A] watercolour by William Henry Hunt of a young man naked to the waist with his trousers rolled up above his knees has been said to represent a boxer. The subject is, nevertheless, more obviously a model posing in a studio – a sturdy, broad-shouldered youth with well-developed biceps who stands in an attitude that is pensively resistant rather than aggressive. It is somewhat exceptional in the oeuvre of Hunt, who was best known for his meticulous paintings of fruits, vegetables, and birds’ nests, highly and sometimes extravagantly praised by John Ruskin. His paintings and drawings of the human figure were usually of children with a sentimentally humorous appeal. Like other English watercolour painters of the time, however, he made his living partly as a teacher of upper-class amateurs, providing exemplars for them to copy. This highly finished study may well have been made for such a purpose, as an aid in figure drawing for those who did not have access to a life class. The model… seems to have been employed on account of his fine physique rather than ethic characteristics. But the mere fact the he was black sharpened Hunt’s focus, obliging him to concentrate on visual appearances with less reliance on schemata derived from classical art than was usual in life drawings of nude or semi-nude models.’

Hunt was born in London, the son of a tin-plate worker and japanner. J. L. Roget recorded the observation of Hunt’s uncle: ‘nervy, little Billy Hunt… was always a poor cripple, and as he was fit for nothing, they made an artist of him.’ At the age of sixteen he was apprenticed to the landscape painter John Varley for seven years, moving to live with Varley at 18 Broad Street, Golden Square, London. There he made close friends with both John Linnell and William Mulready. Hunt worked at the ‘Monro Academy’, at 8 Adelphi Terrace, London, the house of Dr Thomas Monro, an enthusiastic patron of landscape watercolourists. Through Monro, Hunt was introduced to the 5th Earl of Essex and 6th Duke of Devonshire, working extensively at Cassiobury, Chatsworth, Hardwick Hall, Devonshire House and Chiswick House.

At the beginning of the 1820s Hunt’s work moved away from topographical scenes to ones of human interest, including rural or domestic characters, as well as still lives and figure studies. Throughout the decade he spent the winter months at Hastings in Sussex, where he made many drawings of boats, the seashore, and fishermen. Three brothers he met in Hastings, who became known as ‘Hunt’s boys’, posed as models for many of his drawings.

Hunt made several studies of black sitters, including a beautifully observed drawing of a young girl in pencil on buff paper now in the Courtauld Institute, London and a watercolour of young boy with a slate at the Victoria and Albert Museum, London. But Hunt’s studies of black children are quite different in character to this study of a young man. His studies of children appealed to the sentimentalised nineteenth-century view of childhood, albeit, a view overlaid with racial prejudice.[1] This powerful study of a young man is more ambiguous. Hunt has deliberately captured the model in repose, revelling in his musculature, whilst resisting the temptation to show him in a classical pose. Exquisitely hatched in watercolour, the sitter’s torso and legs are scrupulously described. John Witt suggested Hunt’s subject was a boxer. Certainly there were a number of celebrated black pugilists in nineteenth-century London, including James ‘Jem’ Wharton who won a series of matches during the 1830s. But as Bindman and Gates suggest, the sitter is just as likely to be a model. British artists were increasingly interested in Black models during the 1830s, slavery was abolished throughout the British Empire in 1833 and the abolition movement gripped fashionable London. 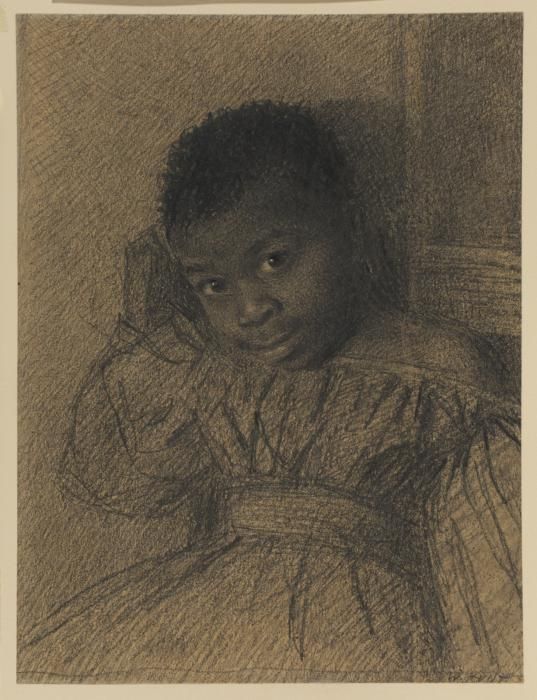 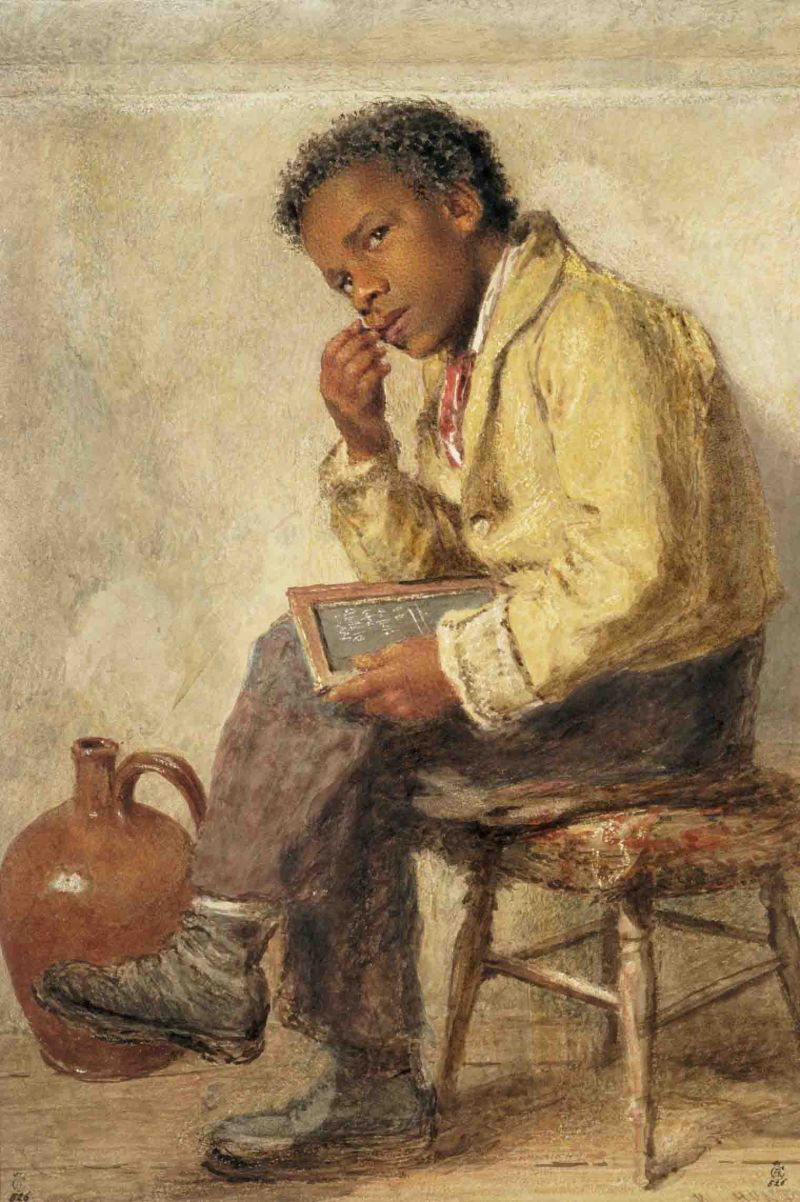 Hunt’s watercolour communicates admiration for the model’s physique, and this may point to an aspect of Hunt’s art that has not received sufficient attention. Hunt himself almost certainly suffered from some form of physical deformity, according to his early biographer, F. G. Stephens, Hunt was: ‘was a little less than… five foot. He broad as well as round shouldered and his head was large beyond proportion to the rest of his figure which the torso was that of a larger man. His large and long frock coats and loose trousers although favourable to him on other accounts, did not add to his outward graces.’[2] Stephens adds that Hunt’s personal disabilities: ‘frequently made him reserved and not very easily accessible to strangers.’ This reserve developed into a pathological dislike of his appearance, the painter G. P. Boyce noted in his diary that: ‘W. H. Hunt had a morbid conviction of his own ugliness and desired that all record of him to the present in the way of portraits or letters should be destroyed.’[3] By contrast, the toned musculature and athletic physique of the young man evidently awed Hunt, who carefully delineated his body in watercolour.

But there is also evidence that Hunt was not simply fetishizing the black body. According to several early biographers Hunt was familiar and friendly with members of Victorian London’s black community. In her memoirs Ann Mary Wood offers an account of Hunt’s character and habits:

‘a Quilp like dwarf but…[he] possessed the tenderest heart and the most sympathetic and delicate nerves. Like Paul Dombey he was addicted to low company, and street conjurors, acrobats and nigger minstrels were always welcome at the tea table of his humble lodging, and a certain ‘Bones’ in the latter troop was his especial friend.’

Bones was a generic character from minstrel shows, a reference to the instrument he would have played: bone castanets. But this reference suggests that Hunt was intimately acquainted with black performers. This is an area that deserves further investigation. This immensely appealing work, preserved in excellent condition was most recently in the collection of the great New York collector and Broadway star David Daniels.