This iridescent study of the moon was made by the great Pre-Raphaelite painter William Holman Hunt at sea, on a voyage he made to Jerusalem in December 1875. Using a vertical slip of paper, Hunt intensely observed the waxing moon showing it as menacingly red against an inky sky. An exceptionally rare preparatory watercolour, Hunt used this plein air study in preparation for his finished oil: The Ship now in the Tate, London.

William Holman Hunt, the son of a warehouse manager, was born in London in 1827.  He worked as an office clerk before entering the Royal Academy Schools in 1844, there he formed close friendships with John Everett Millais and Dante Gabriel Rossetti. Hunt and Rossetti shared a studio in Cleveland Street, Fitzroy Square from 1848 and there they formed, with Millais and four further friends the Pre-Raphaelite Brotherhood. The aims of the movement were elucidated by Rossetti’s brother, William Michael: ‘to have genuine ideas to express; to study Nature attentively, so as to know how to convey it; to sympathise with what is direct and serious and heartfelt in previous art, to the exclusion of what is conventional and self-parodying and learned by rote; and most importantly, to produce thoroughly good pictures and statues.’  They endeavoured to revive the brilliance of colour found in Quattrocento art and paint works that relied on close observation, eschewing pictorial artifice.

Hunt was, in many ways, the most committed Pre-Raphaelite, combining his fervent commitment to painting with an exceptionally strong faith. In 1854 he made his first trip to the near-East, arriving in Jerusalem in June of that year. His time in the Holy Land inspired a sequence of major paintings, including: The Finding of the Saviour in the Temple, now in Birmingham Museum and Art Gallery and most significantly, The Scapegoat begun in Syria and now in the Lady Lever Art Gallery, Port Sunlight. Hunt returned to London, where, in 1859 he achieved conspicuous success, The Finding of the Saviour in the Temple being acquired, with its copyright, by the dealer Ernest Gambart for the considerable sum of £5,500. Its appeal to popular piety had an electric effect. In 1865 Hunt married Fanny Waugh; impatient to return to the near East, the newly-weds set-out for Jerusalem. In Florence, en route, Fanny gave birth to a son, contracted malaria fever and died. Hunt returned to England in September 1867. In 1875 he married Fanny's sister Edith, and returned to Jerusalem, steaming from Venice to Alexandria on board the steamship Delhi.

It was this voyage which inspired Hunt’s painting of The Ship. On his arrival in Jerusalem in March 1876 Hunt reported that he had: ‘managed…to paint out a picture of our ship from on board which I made sketches in coming out.’ The present watercolour of the moon is the only known sketch to have survived. In the finished painting Hunt focuses on the effects of light, both artificial and natural, contrasting the warm glow from the kerosene lamps to the bright white light from the moon in the star-speckled sky.  For Hunt The Ship signified life as a journey and his religious uncertainty: ‘with no guidance from Him but the name of the port to be reached ... nothing but the silent stars to steer by the heavily freighted ship and no welcome till the land is reached.’  The woman is possibly Edith, and Hunt, the man at the wheel.  The painting also displays Hunt's continuing fascination with nocturnal meteorological conditions. This watercolour study differs from the final oil in both palette and reading; the finished picture displays a stark white crescent moon, as Hunt reserves the brightest colour, a lurid red/orange similar to this study, for the partially hidden flames issuing from the funnel of the ship. Judith Bronkhurst has observed: ‘Although the shape of the moon is identical to the crescent moon in The Ship, in this study it is an acid greeny-yellow rather than pristine white. The obscured part of the planet is stippled in red, brown and green, instead of the deep blue ultimately adopted by Hunt.’[1]

As a rare lunar study made from the deck of the SS Delhi, this watercolour occupies an unusual and significant place in Hunt’s oeuvre. It captures the intensity of his method, closely observing and refining aspects of each composition as he laboriously worked. In this case, the altered approach and distinctive format of the watercolour suggest that Hunt intended it to have a life as an autonomous work of art: an intensely felt study of the moon made in full sympathy with the early tenets of Pre-Raphaelitism. 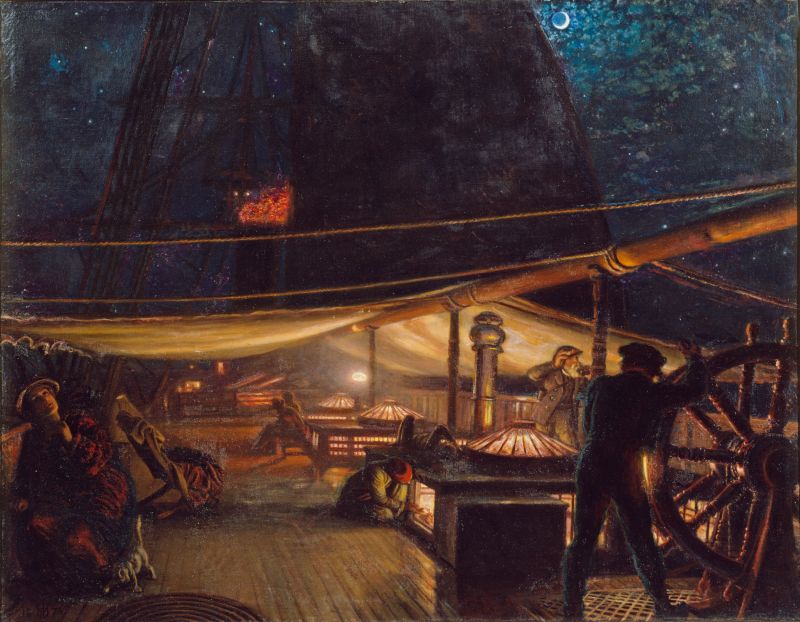