This exceptionally bold and fluid oil sketch was made by Francis Danby towards the end of his life. It forms part of a group of highly charged studies Danby made whilst he was living in Exmouth on the Devon coast.

Born and trained in Ireland, Danby led a peripatetic life, first in Bristol, but from 1829 on the Continent, where he fled to escape his creditors. Danby was consistently regarded as one of the most significant and innovative landscape painters of his generation producing a sequence of visionary works which combined a fascination for extreme climactic events with a remarkable sensibility to naturalism. In 1824 he showed Sunset at Sea after a Storm at the Royal Academy, showing the raft of shipwrecked survivors in a desolate inky sea illuminated by a vivid red sunset, where it was acquired by the Academy’s President, Sir Thomas Lawrence. In 1828 Danby showed The Opening of the Sixth Seal at the Royal Academy, an epic work showing a mass of figures cowering on an eerily lit rock beneath a blood red moon, where it was acquired by William Beckford. The painting was a critical and financial success, Danby being awarded a premium of 200 guineas from the British Institution and receiving £300 for the copyright on top of the 500 guineas paid by Beckford. The painting even elicited the grudging respect of John Constable who described the painting as ‘a grand but murky dream.’[1] Despite these successes Danby failed to be elected a full member of the Royal Academy in 1829, losing out by one vote to John Constable. Debt compelled Danby to spend the following decade on the Continent, eventually settling in Paris in 1836. He continued to produce a stream of ambitious historical landscapes which he sent to the various exhibiting societies in London.

In around 1855 Danby moved to Rill Cottage in Exmouth, situated above North Street it commanded sweeping views across the river Exe. Finally financially secure, thanks to a steady flow of commissions from dealers and collectors, Danby settled down to enjoy his life in Devon. One result was an exceptional group of small, intense plein air oil sketches of which the present example is one of the most compelling. Francis Greenacre described the present work as: ‘perhaps the boldest and most immediate of the oil sketches, this is a hasty, dramatic and personal record of an actual sunset.’[2] Danby has worked rapidly on prepared paper applying bands of colour to suggest foreground, river with its sweep of red reflected sky, the western bank of the Exe and the vivid sunset above. These horizontals are interrupted by the vertical lines of a stand of trees created with rapid feathery brushstrokes of loaded paint. Danby has worked at speed to capture the impression of the vivid sunset, a sense of this speed is suggested by the drips of liquid paint which have run from the line of blue grey sky at the top of the sheet. It is possible that Danby recorded a view from the window of Rill Cottage, an exquisite upright sketch from the same group shows the corner of his drawing room with a similar tree line visible through the window.

The present oil, along with the best of Danby’s oil sketches including A Boat-building Shed in the Gere Collection at the National Gallery, is mounted on a piece of card which has been inscribed ‘Francis Danby A.R.A’ by Danby’s son, James. Eric Adams stated that this group of oil sketches, along with other mementoes relating to the artist, including his photograph portrait, survived in the Danby family until about 1930 when they were dispersed.[3] 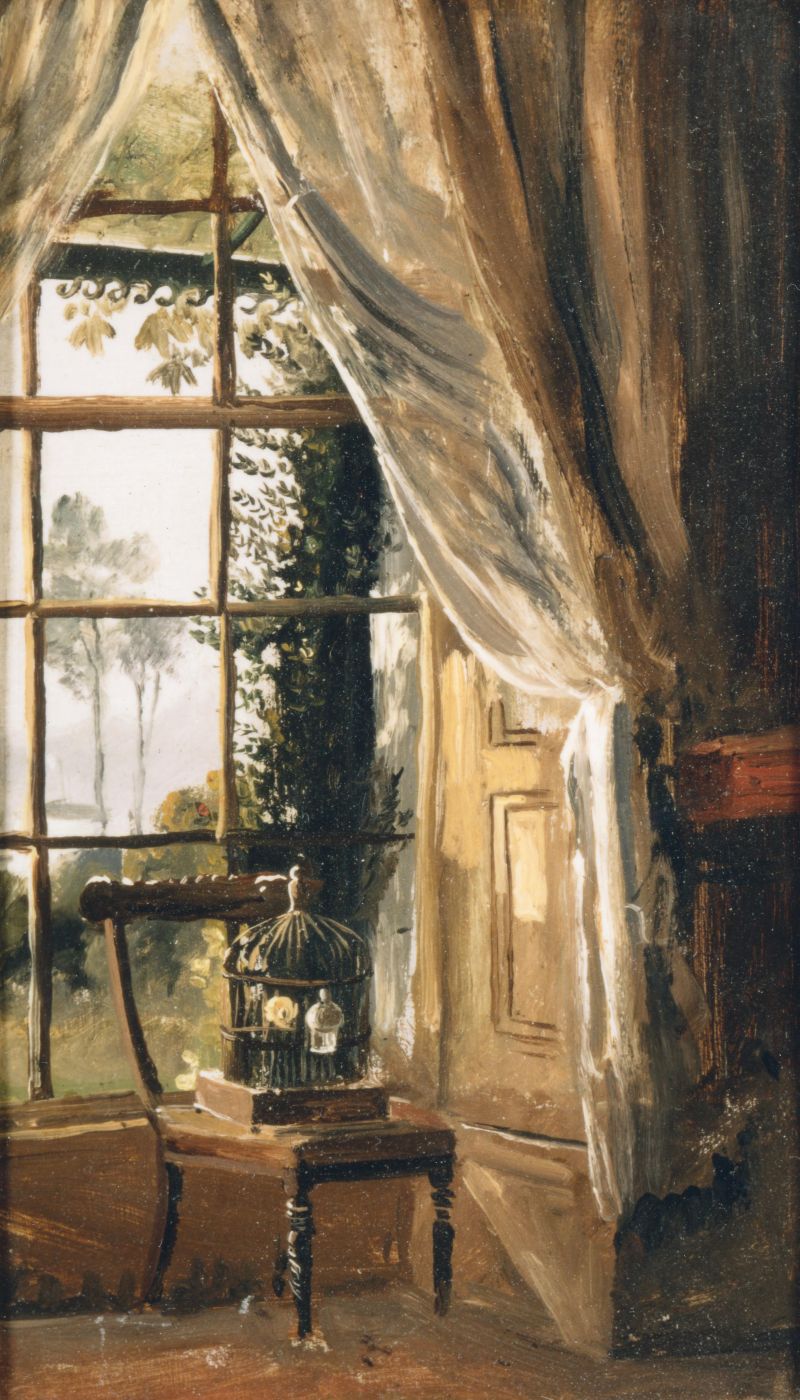